3 Simple Tips for Controlling Trash in Your Van Let’s face it, recycling is a bit complicated when you’re traveling and living in a van. It’s not impossible, but it does take more time and effort than in a normal household. Due to the lack of space, you might feel that even though green values are important to you, sorting the trash is simply too overwhelming of a task.

I agree. It’s way easier to keep all trash in the same bag and get rid of it at once. You don’t want to have six different bins taking up all the little storage space in your van and then have to drive around trying to find a collection point. Recycling has some pros, though. Let me share some tips on how (and why) to start recycling in your van.

You’ve probably noticed, that the trash builds up super fast when you’re living in a van. There just isn’t a place where you can stash it all, like in a regular apartment. I used to have a bag for empty bottles, another one for magazines, and a third one for cardboard. These bags were in addition to three separate bins for plastic, metal, and kitchen scraps. It goes without saying, that there’s no room in a van to hoard trash like that. That’s why the first step is all about preventing the trash from ending up in your van in the first place.

Easier said than done, huh? Yes, shopping package-free can be frustrating and time-consuming, but you can start small. Next time you go shopping for groceries, take some reusable bags with you to the store. Smaller ones for fruits and vegetables, and a couple of larger ones to carry all the groceries back to your van. If you tend to buy meat or cheese from bulk, bring a container for those as well. Some markets may not allow the use of customers’ own containers, but you might as well ask. Remember to weigh the container beforehand and write the weight on the side of it, so you don’t end up paying for the container itself. Every little item builds up in a van. One larger container can replace many small containers. Saving you both space and money.

The aim is to try to find products with less or no packaging at all. Pay attention to the packaging material too. Avoid plastic and favor cardboard, paper, glass, and other reusable materials. You probably own some bowls, mugs or the like, right? So instead of buying a six-pack of yogurt, try to find a single larger package of the same stuff. A six-pack takes up more space in the trash (and in the fridge) than a 1-liter carton. Chances are, that the family size package is also cheaper. Thanks to the ridiculously common habit of packing products individually, package-free shopping is equally hard no matter where you live. Paying attention to this really pays off if you live in a van, though.

In case you ended up buying a ton of useless packaging anyway, the game isn’t over yet. While stuffing the groceries in the fridge, put aside the packaging you don’t need. Some bigger markets have collection points, so there’s a chance you may not have to hold on to the trash for more than a couple of minutes. If you don’t spot a promising line of colorful bins anywhere, try googling. Some countries upkeep a list of collection points online. If you’re lucky, there might be one near you or on your way out of the city.

You open the van door and a foul odor puffs to your face. While you’ve been spending a sweaty day climbing, cycling, hiking or whatever your thing is, the kitchen scraps in the trash have started to smell. Sound familiar? The issue exists in normal households as well, but the smell kinda tends to be much worse in a small space where the air stays pretty much still.

If you only have room for one extra bin, I suggest that you start sorting the kitchen scraps. It’s probably the easiest way to start recycling in your van since it’s quite effortless to get rid of the scraps. Choose a small bucket with a handle and tight lid, so the bin doesn’t take much space, it is easy to carry around, and all the odors stay inside. When you cook, you can have the bin on the table and put all the veggie peels straight into it.

And how to get rid of the scraps? Bury them. Equip yourself with a small (preferably metallic) shovel, take a hike, dig a hole and throw in the banana peels. Remember to dig a hole that’s deep enough, so the trash won’t be dug up by animals. You can also stash the scraps under a heavy stone. Burying isn’t an option though if you’re in a more urban environment or the land is clearly owned by someone. Luckily, you can still get rid of kitchen scraps by dumping them into a shared compost. I just recently ran into a service called Share Waste, which gives you the opportunity to take your scraps to somebody else’s compost. You can look up the nearest composts from sharewaste.com.

If you unable to compost, find another way to keep your waste out of the landfill- find a compost friend 🙂 more comPOSTS to follow. #creationcare #greenlivingtips #compost #composting #environment #eco #ェコ #堆肥

You can make all kinds of useful stuff out of garbage. For example, my partner and I consume a whole lot of nuts and usually buy them in HUGE packages. Some months ago we bought a 2 kilo bucket of them, and once the bucket was empty (it took 10 days), we made it our organics bin. We also like to eat pickles and beetroots on top of a slice of bread and thus ended up having a pile of empty jars. Instead of throwing them away, we decided to use them to make some more storage space. We screwed the lids under a shelf above the stove and now store pasta, soy crumble, rice, couscous, and muesli in the jars. You can find plenty more instructions on what to make out of empty jars or just about anything by googling. Do you have a legion of empty bottles rolling around? You can reuse them as shoe holders. Or a sponge holder. If you know that you’re in a need of something that can perhaps be made using recycled materials, keep it in mind when you go shopping. Next time we’re out of honey, I’m looking to buy it in a jar, which I can reuse to store some chalk. Cheap, but practical.

There. Now that the advice is out there, it’s up to you wether you take it or not. I suggest that you try at least the first step, which I think is the most valuable one. Why? Because it doesn’t cost anything, nor does it take any space. And because reducing the amount of trash (by shopping package-free) is the single most effective way to make recycling easier in your van. 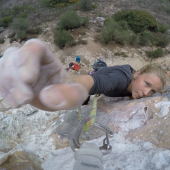