9 Tips for Coping with Anxieties of Life on the Road We’ve been on the road for a little over 8 months and I’ve been thinking a lot about living life without fear and how glorious that would be, especially for days when I feel like I’m afraid of everything.

There’s definitely something to be said for that, but I think there’s more to be said for living a life with fear, acknowledging its existence, pushing its presence into your life more often, and growing in spite of it all.

If you met me, you probably wouldn’t know I have a pretty steady discourse of fear and resistance in my head. You would think I’m normal(ish)—whatever that means. I have no idea how normal it is to live in disasters in the future or if it’s normal that sometimes I don’t want to get out of bed in the morning because my chest feels like I’m riding roller coasters and maybe no one likes me. Do other people kill off their partner in hypothetical situations daily?

I’m not talking like, “Oh my God. He’s so annoying I could kill him.” But more along the lines of worrying myself into picturing a bear mauling him because he’s not singing constantly on the approach, or seeing him tumbling down the entire cliff face when we’ve untied to summit a multi-pitch.

Anxiety is a feeling we all experience and I’m certain that where I fall on the anxiety scale is a lot higher than my closest friends. But I also know that where I fall is a lot lower than others out there; my problems are very minimal.

It is, however, clear to me that this roller coaster feeling affects my relationship with life on the road, a space that is exciting, constantly changing, unpredictable and unfamiliar.

Throughout the last eight months in our Ford Explorer we like to call the “Red Ved,” I’ve learned some tips that have helped me with life on the road. I’m hoping they can make someone else’s transition to van life a little more comfortable.

This one is big for me. I used to be so worried about everything to do with life on the road.

For example: crawling out of Ved on a residential street, throwing away a week’s worth of trash at the local grocery store and then vegging out or even cooking in the parking lot. Or, simply approaching a group of people or a stranger in an attempt to make new friends.

People stare at you. In my head, that could mean a range of terrible things, but I’ve modified my interpretation to believe that they’re curious. I now embrace these slightly uncomfortable situations with eye contact and a smile. In doing this, I’ve received many instant head-turns to look away …. (probably out of embarrassment for being caught staring), some frowns, lots of smiles, some genuine conversation with strangers, and some awesome new friends.

No matter what I receive from these curious strangers, a smile puts me back in control of a situation I have little control over … and that feels nice. No, thank you. We don’t need any bags.

2. Stay in one place for awhile

There’s something really satisfying about being able to picture where you’ll be at “home” that night or week—and some time without constant motion and a bit of routine can feel really comforting. This view made it easy to stay.

3. Invest in some good curtains

There are lots of reasons for some good curtains, especially in such a small space. For the first several months of our trip, we never put up our curtains (mostly decorated pieces of cardboard).  We later learned that the illusion of privacy can make you feel more at “home” and free to relax in that way you can really only do at home.

This is especially helpful in campsites or places where we’re parked close to other people.

I think a great example of this is when you run into someone you used to know. In the past, worry would win out and I would avoid the situation, causing even more thought. Two uncomfortable seconds always wins.

This also goes for jumping into conversations with others or voicing if something isn’t right at a restaurant. Both of these situations used to make me sweaty with worry (and often still do), but the more I do it the better it feels.

Another example that’s been helpful for climbing is if the thought that I want to try and redpoint or lead something new crosses my mind, I should let go of all the concerns about how long it will take, my fear of failure, of falling—whatever it is that’s holding me back—and I should give it my all. Even if I don’t do as well as I wanted, I always feel better having tried. We made some friends on the classic route, Ancient Art in Moab. There was lots of discomfort and fun on this scary desert route!

If I wake up and get the going down a sharp hill feeling in my stomach it’s probably because something triggered it—usually something social, small and seemingly ridiculous.

When I share how I’m feeling with my partner it usually speeds up how long it takes me to feel normal again.

6. Stop worrying so much about your partner

Now I’m not positive that I can ever turn off the jump to deadly hypothetical situations, but I can stop letting it have any control over me or our experiences.

After Nick made a risky choice climbing one day, a close friend of ours said, “Well you can’t really be upset. He is in control of his own risk.”

This stung me a little at first, so I took a few minutes to think about it and why I felt upset. After some thought and discussion, I decided that she is totally right. I picked a smart, capable partner and I have no idea how he is feeling ability-wise in any given situation. Sometimes he has to make quick decisions without time to talk them over and I can trust him to make the right ones.

This conclusion has been so liberating and something I remind myself often, “He is in control of his own risk.” (If your partner is doing something stupid, you should forget this and remind him/her of the risk involved. You should also discuss potential risks in adventure situations often). Meeting in the middle. I’m crouched next to the pitons while he’s extremely extended and standing on top.

When we first started our trip I was so concerned with my ego and ability to climb “hard”  (this is still something I have to check myself on). I was worried I wasn’t accomplishing (sending) anything if I top-roped.

If I did decide to lead something, I was so worried about the new type of rock and where the bolts were that I wasn’t actually having much fun. I got to the point where I was wondering what I was doing on this trip.

I consistently decided to let go and top rope; it’s great way to get acquainted with a new area and gain comfort on harder climbs. Because of this, my relationship with climbing became a lot more fun and after all, that’s really the whole point. I am often pretty conscious of the desires of those around me and sometimes find myself in a place questioning what I “should” be doing or put my needs aside for my partner.

One of the luxuries of life on the road is that you have plenty of time to take your needs into account when choosing your path each day.

If I wake up feeling like I don’t want to get out of bed or I’ve been socializing a lot, I stay in bed a bit longer or spend some time alone (even if no one else seems to need any rest or alone time). My needs tend to lean towards more alone and downtime but could definitely see others feeling the opposite.

I signed up for an online yoga membership with downloadable yoga classes and it has been really convenient and motivating to have so many different classes to explore.

breathe into fear and anxiety,

similar to how you breathe through a hard pose or climbing move.

I’ve been trying to bring this into my life more. Free yoga with a new friend at our campsite in El Potrero Chico, Mexico!

A friend reminded me of the quote, “a coward dies a thousand deaths,” after hearing some irrational worries and hoping to ease my mind. I’ve definitely “died” a lot because one of my super powers is to be three steps of ahead of any potential disaster.

But I really think that anyone that is out there experiencing and embracing a life of adventure despite their anxiety or fears is actually pretty brave.

Being out in the open and living life on the road has brought so much intensity to my life in the form of fear, worry, joy, excitement, and basically every emotion on the spectrum.

While there are definitely some struggles, it is worth it. 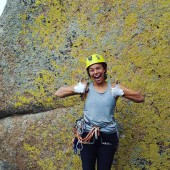