Essay: A Bad Month, Or, The Broken Man’s Guide to Climbing Five years ago my girlfriend and primary climbing partner cheated on me and we broke up. I couldn’t sleep for a long time, instead lying awake in a cold sweat, plagued by images of her with someone else, mentally playing out on repeat the happenstance situation induced by little more than a bottle of cheap wine and a lonely evening.

With the central pillar of my life in pieces, I reverted to the only other thing that occupied my heart at the time: I went rock climbing.

That spring I embarked on a solo journey from Oregon down the California coastline on Highway 1, eventually breaking with my solitude and turning inland to meet some friends at Joshua Tree. When our hands could no longer tolerate the coarseness of the archaic granite, we ventured east to Red Rocks. After two weeks of bloodied fingers, fabled sends, and a much-needed reprieve from the depths of heartbreak, I drove twelve hours back to Oregon and collapsed, exhausted, into bed.

Climbing is always the best medicine. The following afternoon I was biking home from school when my left foot decided to abort its propulsory duties, slipping off the steel pedal and shooting forward. This would have been a perfectly resolvable circumstance had my hands been on the handlebars at the time. They were, however, dangling uselessly at my sides while my mind pondered topics far removed from the steering of my bicycle.

With hands, mind, and now my left foot all set completely adrift, I had nothing left to catch myself with. The pedal came down straight behind my foot, driving it into the concrete. The resulting entanglement caused me to flip headfirst over the handlebars, limbs still fully intertwined with the bike as my face met the pavement. I managed to escape my mangled bike frame and hobble to the curb.

Something was very wrong with my left leg. It was completely numb and oddly insecure, as if walking upon spongy, sodden turf. A brief checkup ruled out a compound fracture. Great. No visibly protruding bones. Must not be broken. I’ll walk it off and ride home. Nothing a PBR can’t fix.

The onset of lightheadedness prompted me to remove my helmet and sit on the curb. It was then that I lifted my pant leg and saw black blood slowly oozing from a deep cut just above my heel.

What should have been a fully taut Achille’s tendon was now a nauseating flaccid indentation.

I lacked any sensation of stability in my lower leg. My foot dangled from my ankle like a piece of raw, lifeless meat. Maybe two PBRs.

A family who had witnessed the wreck stopped and attempted to usher me into their minivan, despite my insistence that I was fine and just needed to sit for a minute. I stood up to demonstrate my physical wellbeing. See? I’ll put my chain back on and be on my way.

Then everything began to fade.

A roaring static came on, consuming my senses, obscuring my vision, filling my ears with a deafening whir. It was somehow comforting, sweet, like being draped in a warm blanket. Somewhere a woman was yelling frantically. The last thing I remember was trying to hold on to the edge of the van’s doorframe as I fell backward into the void. I didn’t stick the move. The ground rose up to hit the back of my head very hard. There was a brief white flash, then only silent blackened nothingness.

Nine hours later my housemates wheeled me out of the emergency room with a partially severed Achille’s tendon, a broken clavicle, a high-dosage painkiller prescription, and the heavy news that I may never walk normally, let alone climb, again. Once more I entered a chronic period of sleepless nights, this time kept awake by a Percocet-induced haze, tortured by the thought of a life without climbing. I craved verticality. I needed to touch granite. I wanted to mainline chalk straight to the vein.

In a span of four weeks, I had lost the two things I loved most in this world.

Emotionally and physically, I was completely devastated. I didn’t leave the house once during the first week and a half. My broken collarbone made the use of crutches impossible, so my roommates had to help me move around the house. I spent my days on the couch with a head full of painkillers, blinds drawn, devolved to an apathetic state of lethargy while basking in the dim glare of South Park reruns.

I couldn’t think about climbing anymore. I couldn’t reflect on my recently imploded relationship. These were pieces of a life that I used to live; things that had been ripped away from me.

Weeks later some friends stopped by and insisted that I needed to get out of the house. My futile protests fell on deaf ears. I rode shotgun with my crutches to the crag, my eyes squinting in the sun. Emerging from the car I felt like a strange pallid shell of something that once walked in the daylight. They took turns piggybacking me up the approach trail. Climbing again proved to be good medicine. I spent the evening sitting on a crash pad watching friends clip bolts, take falls, and send projects as the colors of the waning spring day ignited the basalt columns around us.

I soon discovered that being injured didn’t negate my love for climbing. It galvanized it. Stepping back for the first time transformed climbing into something bigger than a linear ascension through the grades. There would be Herculean finger strength and godlike sends. There would be more injuries and time on the couch. It became not so much something that was taken away from me, but something I was lucky enough to have in my life to work back toward.

Once my collarbone healed to a tolerable degree, I started doing hangboard workouts every morning before school. I found solace in climbing blogs and Facebook updates. Again I lay awake in the dark on those sleepless nights, still crippled, still heartbroken, but this time distractedly crimping the edge of the headboard while staring at the ceiling, envisioning the execution of movement, the silent release of breath, and the composed quieting of the mind.

Mobility didn’t come easily. To regain trust of something that was torn apart in such an abrupt, violent manner is not a quick process. I spent hours with physical therapists and orthopedic specialists doing strength building exercises, rehabilitative massages, electrical muscle stimulation, and range of motion workouts, delivering improvement only in barely perceptible increments. The process was agonizing and discouragingly slow, but determination won out in the end.

Six weeks later I sat, terrified for my fate, in the office of my orthopedic surgeon. He pinched my tendon. He moved it from side to side forcefully. I instinctively withdrew, fearing it would rupture between his fingers. You sadistic son-of-a-bitch. I could feel my nerves tighten. I attempted to relax, remembering why I was there. He was not the enemy.

As much as I wanted to project my insecurities and frustrations onto a central symbol of evil, there was no villain behind my fate. I couldn’t blame my bicycle. I was, after all, the one who had been riding it with no hands.

At the same time, I also realized that I couldn’t fault my ex-girlfriend. Even when I knew that our relationship was falling apart I refused to let go, ignoring obvious signs while attempting to steer the failing wreckage back on course. I was too invested in my idealized versions of our future to see the flaws in our present. For her, cheating became an obvious (if inelegant) line of exit. When the opportunity presented itself, she seized it. Sever the limb to save the body.

The surgeon continued to eye my pathetically atrophied leg. Finally, his eyes darted up to meet my own. “Would you like to leave your crutches here or take them home with you?” Deliverance.

The physical sensation of standing up off the examination bed was akin to rebirth. In that moment I had no thought of my distant return to climbing, or of how quickly I would regain my past contact strength, or when I would be able to sink my hands into desert sandstone. I was concerned only with the moment, the carrying out of each movement, the focus on the breath, the deliberate silencing of the mind.

Although I no longer required the support of crutches, I did not take those first steps alone. In my grasp was the hand of someone new. As with climbing, letting go of my attachment to my romantic future allowed space for the opportunities in my present. This is a good thing right now. She led me on my first walk outside the doctor’s office, six-inch steps at a time, her concerned gaze never leaving my left foot. Ten minutes later, after being passed by two young children who were also learning to walk, she had to go to class, but promised we would celebrate that night.

Months later at Smith Rock, with that same hand providing a confident, watchful belay, I made a cautious return to the vertical world.

Shit happens. Girlfriends and boyfriends cheat. Dogs die. Beater cars break down. Partnerships strain past the point of civility. Injury and heartbreak, however, are now old beasts. They are no less painful, but I know these waters well. Whether free soloing to mend a wounded heart, sweating out hangboard sessions through the off-season, or watching The Sharp End for the third time between Percocet naps, the broken climber is no less a climber, and the brokenhearted human no less a lover. 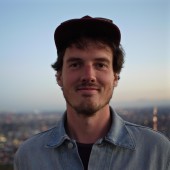 After nearly a year of living out of his car, Samuel recently sold out and now pays rent to reside in a converted one-car garage in Portland, Oregon.