A Climber’s Take on the WristWidget

Back in October 2015, a group of climbing buddies and I were training hard. We were following one of the training programs in The Rock Climber’s Training Manual

, which called for lots of hangboarding. Towards the end of the program, I developed a slight pain in the pinky side of both my wrists. A month later the pain was so bad I had to stop climbing and see the doctor.

The doctor told me I likely had a minor tear in my TFCC; a cartilage complex on the pinky side of the wrist. She gave me some anti-inflammatories and told me to rest a month to see if the pain would die down. It did, but then came back when I started climbing again.

Eventually, I was referred to a physical therapist who recommended that, in addition to strengthening with the FlexBar, I wear a small brace called a WristWidget

on each wrist while climbing. Eager to try any and all forms of conservative treatment, I ordered two the next day. Since March I’ve been wearing the WristWidget —except for the past month for reasons I’ll explain later—and these are my thoughts on its effectiveness for climbers.

Does the WristWidget reduce wrist pain while climbing?

If you have a minor TFCC tear, chances are the WristWidget will reduce your wrist pain while climbing and in daily life. Personally speaking, my WristWidgets have reduced my wrist pain by a noticeable amount while climbing. The support and stabilization they offer allows me to grip, pull, and push with less pain and therefore climb harder and longer.

TFCC injuries can also make daily tasks painful, such as lifting heavy objects, chopping vegetables, and pushing a full grocery cart. The WristWidget also helped reduce my pain in these scenarios. Beyond my anecdotal data and the observational data from my physical therapist, there’s an interesting case report backing up these claims.

How do I know if I have a TFCC injury?

WristWidgets are designed for people with TFCC tears. According to Midwest Orthopedics, the most common symptoms of a TFCC tear are:

As I’ve recently learned, I had a frayed TFCC, which caused me to have just two of the above symptoms—pain and loss of grip strength.

If you’re still unsure what’s causing your pain, one of the best ways to determine whether your TFCC is damaged is to perform a weight bearing test. It takes just a couple minutes and WristWidget made a helpful video on how to do it:

If you’ve determined that you probably have a TFCC tear, first go see a doctor! Don’t be stubborn like me and end up with chronic wrist pain. It ain’t no fun. Then consider the WristWidget as a conservative treatment option.

How I use the WristWidget while climbing

While climbing, I’ve found it’s important that your WristWidgets be tight. Real tight. Almost climbing-shoe-level tight. Don’t cut off your circulation, but don’t make it easy for your blood to pass through your veins, either.

WristWidget has also made a good video on how to put one on:

Once they’re on tight, climb as you normally would. You might still have pain with certain movements, so try to listen to your body and know which moves or holds will hurt so you can avoid them or adjust your grip. (For me, pinches = pain.)

While I’m resting, I loosen the straps and allow my wrists to relax a little, just like you would do for your feet if wearing tight climbing shoes. Then, when it’s time to hop back on the wall, I strap them back down.

The WristWidget is not a panacea, though

For some people, the WristWidget might be the only thing you need to essentially eliminate your wrist pain. My physical therapist wore them herself and told me they had eliminated almost all of her pain. The only thing that still caused her pain was flipping tires at CrossFit, which I found funny.

However, others, such as myself, will not be as lucky. I mentioned at the start that I haven’t been wearing WristWidgets for the past month. That’s because I ultimately decided to get surgery on my left wrist. The pain, though reduced by the WristWidget, never went away.

I’m happy to report the surgery went well and I should be able to ease back into climbing in less than three months. And hey, who knows, when I do maybe I’ll start back wearing my WristWidgets for some extra support. 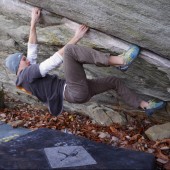