A Glimpse from the Tallest Mountain in the Americas My stream of consciousness is as active as a kitten and I cannot sleep. Damn it! The one night that sleep is the most important, I cannot get it. I never have problems sleeping and look at me now.

The seconds tick painfully by like minutes. Joel and Rickard are up at 4 a.m. melting snow to make water for the day. They both feel incredible, they say, and cannot wait to begin. Not me. I feel like complete shit, with a headache that rivals those after my most intense hangovers in college. I really hope this headache is a symptom of sleep deprivation and not altitude.

We are currently at 19,600 feet and the goal is to get to 22,841 today. I roll over in my sleeping bag and try to snooze off the pain. The plan is to leave the tent by 6 a.m. At 5 I get up to force down some oatmeal. The headache lingers painfully, but my new Scandinavian friends are supportive. I am not sure I will be summiting today.

You have to come. This is the day you will summit Aconcagua and the weather is perfect

Man, wouldn’t it be great to finish this thing today?

How ready I am to be done with this mountain. But I know the severity of pulmonary or cerebral edema, and I will not flirt with disaster. In my mind the only options are to descend or ascend—I will not stay here at this camp. If I ascend it must be without headache, and if I descend it must be because the headache did not abate. I am well acclimatized, having just ascended Volcan San José 9 days ago up to 19,200 feet. The head pain does not feel altitude-related like I’ve experienced in the past.

Running through my WFA training, I remember the notes on HACE (High-altitude cerebral edema) and HAPE (high-altitude pulmonary edema). Taking pain-killing drugs at altitude is tricky business. Typically it is not recommended to pop pills at the start of any ailment high in the mountains, but then again, if ibuprofen is administered for headache in high altitude and pain does not decrease, then one has reason to worry. If the pain goes away, all is well until or if further symptoms arise.

Cautiously, I take two pills and begin eating my oatmeal, crossing my fingers for the best. Like magic, the pain is gone an hour later and Joel, Rickard, and I excitedly prepare for our day with renewed enthusiasm. By 6 a.m. we leave the tent and the cold penetrates us like a bucket of ice-water. I turn to Rickard and ask,

as he is wearing nothing more than a light jacket and military-issue hiking boots. He retorts,

No way … My viking blood does not allow me to feel cold!

Related: Tech Tip: 5 Ways to Stay Dry in the Mountains

With that we begin our ascent.

The proceeding thirteen hours turn out to be the most strenuous of my entire life. The 3,300 vertical feet we had to climb that day were done at such a snail’s pace over loose scree that the entire day was spent slipping and sliding. Eight hours up, five hours down, at a rate of two steps up the path, one step sliding backwards … Absolutely horrible. About four hours into this torture-fest, we reach the infamous Travesia—a flat section about half-mile long and susceptible to winds upwards of 50 mph. Winds of this strength, plus already extremely cold high-altitude temperatures equal deathly cold windchill and frostbite temperatures. I’m wary of this and have prepared by renting plastic double-boots and am covered from head to toe in down clothing; however, this seems to be news to many who are clad in nothing more than light jackets and hiking boots.

I see a few turn back early because of their ill-preparedness. We begin the traverse and I am immediately chilled to the core. At one point I turn around to see that the man behind me has his nose partially exposed from under his goggles and facemask and that the exposed part of his nostril is blue-white; clearly frost nipped. Startled, I try to point out the issue,

I repeat over and over.

Your nose is freezing,

I try in English, but to no avail. He just returns a blank stare as if in a trance. This man is not in good condition. His guide sees what I am talking about and stops him to address the issue. I move on, checking my own face for exposed flesh. Frostbite, I remind myself, is extremely common on this mountain. Wiping my own nose leaves an entirely intact snot-icicle on my glove about two inches long. I wonder what I would look like without a nose …

I am now supposedly one hour from the summit.

I have just run into Joel, Rickard, and Nick (the only member of the American team to try for the summit today) who are all on their way down from the top. My energy level is hovering on empty so seeing familiar faces is incredibly comforting.

they all chime in unison. Apparently they were the first to reach the summit today. I am happy for them. They leave me with water, food, and confidence—all of which were previously depleted—and I am on my way again with fresh legs.

The next hour was easily the most difficult of my entire life. Every five steps over the loose path I stop, panting for breath, sucking at the thin air. Each break growing longer than the last, my last ten steps to the summit are so labored that upon reaching the summit I collapse in a miserable pile on the rocks and sleep soundly for 30 minutes.

Upon waking, the fanfare of reaching the top of this mountain is kept to a minimum; between my nausea, sudden need to shit, fatigue, and a dorky American couple poking me awake to take their photo with the rubber ducks they have hauled to the summit. I oblige, but the wacky scene is too much for me. I snap a few photos and am already making my way down. Like before, I find myself stopping every five steps for a break and a quick microsleep.

The path is so difficult to descend—as hard, if not harder, than the ascent. From the top of Aconcagua you can clearly see camp Nido de Cóndores, where my tent, sleeping bag, and food lie. From where I sit resting (my energy completely spent, sucking at the non-existent air), those tents seem impossibly far away.

About halfway down I get passed by a park ranger escorting a hiker down the loose scree. The hiker, attached to the ranger at the waist by a leash of webbing, is stumbling down the path as if he is completely drunk. The path is loose on the way down, and it is hard for me to get good footing, but this guy has something fundamentally wrong. Clearly in a worse state than I am, I recognize that if this altitude-sick climber can make it down alright, then so can I.

I find a second wind in this comparison and redouble my efforts, increasing my pace.

The further down the path I get, the air progressively becomes easier to breathe. Before long the tents do not seem impossibly far away and I find myself no longer needing breaks between steps. I am still exhausted, but have almost made it home.

It is at this point that I realize exactly what I have accomplished. I have climbed Aconcagua—the tallest mountain in the world outside of Asia. Emotion hits my tired brain like a train. Not only have I reached the top, but I did so solo in an abnormally fast seven days! It is no wonder I am so exhausted.

I arrive to my tent just as my energy gives out and collapse into my sleeping bag. Rickard and Joel have already descended in search of pizza in Plaza de Mulas and I am sad not to have them to celebrate with. It’s alright though, I really am too tired to do anything—including cook. Instead I roll over and sleep harder than the rocks I have been scrambling over all day, feeling exhausted yet extremely happy. Related: An Interview with Mark and Janelle Smiley 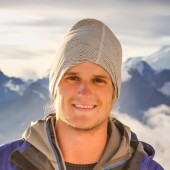