A Hard Truth About Professional Climbing ‘Okay, let’s talk about tomorrow’s plan,’ the director said, locking eyes with me. It was the 10th day of the shoot, and the initial excitement had worn off, leaving a sense of drudge. Many days of work…and I had been filmed in one sunny bum shot and a few clips of me top-roping.

‘We haven’t shot a lot of her, so tomorrow should be dedicated to getting her on whatever climb she wants,’ he said, as the all-man team looked my way. I blushed at the attention, but a giddy nervousness welled up inside. I finally had a chance for another shot, but would I be able to perform? For the past five years, I’d been attempting to live the dream, pursuing a career as a professional climber. Hooked on the climbing comp scene, I lived for the anticipation of performing my best and the recognition of my peers. When I decided to transition to being an outdoor athlete, I fantasized a big brand booking me plane tickets to France, and envisioned myself in a puddle of Scarpa shoes so high I was giving them away to friends. The idea of being paid to do what I already did 5-7 days of the week was more appealing to me than any traditional career.

I gave up my regular lifestyle to pursue this dream of climbing as much as possible, but I hadn’t considered the demands that came behind a brand’s name. When my climbing partner called and asked if I would be his partner in a film, I excitedly accepted the project at the semblance of a free trip, and the seduction of incredible climbs. But the gratefulness I approached the project with had been slowly chipped away at by reality. Early mornings, long hours belaying, and the surprising lack of actual climbing made the first 7 grueling days of the shoot feel like less than a dream opportunity. My first chance to be filmed came unscripted. I thought we were just warming up, but instead, there I was, hair not done, clothes off-brand, being told that I had one go on the climb. The result: one simple sunny angle, ending with a bum shot of me clipping the chains. The unexpected pressure and lack of real warm-up had cracked my confidence.

In the sphere of professional climbing, would an attitude of gratefulness really push me to my goals?

I had to be ready, at all times, to perform…and ready to be brushed aside at any moment. I had to become a champion of myself, confident and cut-throat.

‘What climb do you want to do?’ the director asked. I stuttered that I didn’t know. I wasn’t used to them asking for my input. Typically, I had not been given a choice on what to climb, a frightening truth I had to face, as many climbs could still leave me stumped and embarrassed despite my accomplishments. I swallowed. I’d barely trad climbed, and this crag was all hard trad.

‘It doesn’t have to be a hard grade,’ they said, ‘just something that looks good on camera.’ But I knew it wasn’t true. To be a woman in an all-man film, you had to be climbing something hard. A bum shot and top-roping would be cut from the film. And although true for the time, those shots weren’t representative of my skills. But it wasn’t just about me. I was representing all those women who had ever been in a climbing film and had a 2-minute section in a 1-hour film. I was representing every woman who wanted to multi-pitch or trad climb but was too afraid and felt they couldn’t do it.

The burden to be every woman came down on me hard.

I wanted to try something easier than the climb that had been chosen for me, but that didn’t feel like an option. And worse, what if I couldn’t do an easier one either. I could fail either way, which was infinitely worse.

Morning came and I quietly walked up the path behind the others, not wanting to draw attention to myself. We reached the crag. All eyes moved to me as the director called my name. Four climbers, one day of shooting, how were we going to fit it all in?

‘Who brought ropes?’ someone asked. ‘I have one,’ I said, followed only by silence. ‘We only have one rope?’ the director demanded.

The blood drained from my face and I knew what that meant. They’d all be waiting on me if I went first. It was almost too much to bear. The truth was I needed to try the climb more than once to succeed, and I didn’t want them all watching me. It would take me 2-3 goes to be able to place the gear safely, but I didn’t want to spell it out for them; I just wanted the space to be safe and confident. But now we had one rope. That wasn’t an option.

‘Well, while she decides, I want to go try this climb over here,’ one of the guys said. At first no one answered, but the beat of hesitation quickly passed, and they were gone. He took the rope and walked to the opposite side of the crag. He started tying in, the drone started flying, and fixed lines went up. And that was it.

Before words could form in my mouth, my chance was over.

I sat down on a rock. Just like that, I had become invisible again. The harsh reality of my lack of confidence hit with a smack.

It was clear to me then that it took more than climbing skills and the right invitation to be a professional. As I sat unpacking my bag slowly so no one would notice my disappointment, I questioned what it would take to be something in this game.

To ask all the cameras to watch you, to ask every person for a belay with no promise of a belay in return, to take up other people’s days to send your project, to convincingly force your way to the front of the line, to always demand the attention. In that moment, I knew that I didn’t have that kind of brute force, that beautiful, admirable inherent faith in yourself.

Perhaps this is the difference between someone great and someone on the edge of greatness. If that’s what it took, then I didn’t have it in me. Confidence comes from somewhere deep inside. Some of us are naturally born with it, but confidence placed in the validations of others can easily be destroyed. But in climbing, as in life, we only need be who we truly are. There is room in the world for all types of climbers. There’s room for the weekend warrior, the supportive partner, the best buddy, the beers-at-the-crag guy, the grade hunter and even the pro.

Maybe one day I can confidently ask for the attention promised me, but for now, let’s just go to the crag. 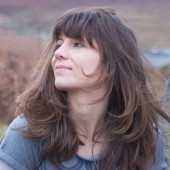 Alice Hafer is a writer, rock climber, and women's climbing advocate, based out of Las Vegas. She likes cats, pizza, and pushing her body to the limit.