After joining an outdoors club in college, I decided to take a weekend trip with the club to a place called Seneca Rocks in West Virginia. I didn’t know what rock climbing was other than scaling up rock faces and had no expectations on my ability of being able to do it.

Seneca Rocks is a special place for me. I remember hiking up the 600 feet of elevation to get to the 300 feet of rock. As I huffed and puffed while gaining the little elevation, I started doubting my decision. Other members of the club climbed with breeze up some of the routes that were being set up for top rope for the newbies like me. I was instructed how to put on my borrowed harness and tied in by someone that knew what they were doing. LIttle did I know, I was relying and trusting people I barely knew with my life.

I don’t remember much from that day since it was so overwhelming. I don’t remember the grade of the climb, the name, or the location, but I do remember being terrible. I was in sneakers and did not have any technique. After I thought I had climbed high, I looked down and noticed I was only 10 feet off the ground. I was at a move I couldn’t figure out and ended up bailing. It was fun and frustrating. I have never been at the top of any sport I have played but have had enough skills to be average. The fact that I was unable to get higher than 10 feet off the ground tore me apart. I wanted to be good; I wanted to try again.

Many years later, I headed back to Seneca Rocks with my boyfriend. He was going to lead me up an easy multi-pitch route, my first one. I had climbed a few times a year and could get up moderate grades on top rope. I was excited to be introduced to a new way of climbing by a person that spent many weekends at Seneca Rocks training for bigger climbs—like the Grand Teton.

Rock climbing has taken me to some cool places, along with local places. However, Seneca Rocks will always hold a special place in my climbing career. It is a place that re-igniated my love for the outdoors. 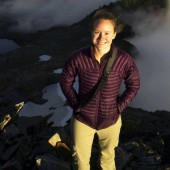