An Interview with Nina Williams on FFAs, Training, and Future Projects Nina Williams began climbing in New Hampshire 13 years ago. Since then, she has become one of the few females to send V13 and has earned her place on the podium in several competitions, including the 2012 and 2013 Portland Boulder Rallies. She also owns an adorable Hedgehog, Frankie.

How did you begin climbing? What got you hooked?

I started climbing at an outdoor wall in New Hampshire and stuck with it because, at the time, it was the sport I was best at. The movement of going upward made sense to me. I didn’t realize I was hooked until my dad suggested something more traditional, like tennis. I felt this inner horror of doing something so conventional. That was when I realized I loved climbing because it was different.

Has climbing changed for you as you’ve gotten older?

When I was younger I felt the need to prove myself to my coaches and otherwise all-male team. As I got older, I learned that I only had to prove [things] to myself, regardless of what others thought. Now I’m in the process of re-working that mentality. “Proving myself” has turned into pushing my potential and seeing how far I can take my convictions. I want to strive toward growth as a person.

You grew up in New England, but moved to Colorado in 2010. What drew you to move west?

I first visited Colorado in 2006 for Bouldering Nationals, and I distinctly remember thinking:

I am going to live here someday.

Fast forward to 2010: after two years of undergrad, four switched majors, mediocre grades, and the intense desire to not be in debt for a degree I had no passion for, Colorado was calling my name.

There’s definitely a different vibe in Colorado compared to New England, although it’s like comparing an odd uncle to a weird cat-lady aunt.

I miss the autumn colors of the Northeast, particularly in Rumney. There are a lot of nostalgic memories in the East that bring me back to being a teenager, figuring out who I was through climbing. It was, and still is, a huge part of my identity. I do not, however, miss the traffic. East-coasters are ruthless drivers.

What inspired you to make the time to train and travel to climbing destinations as you were growing up?

There wasn’t really one moment when I decided to train and travel to climbing destinations; it sort of just happened. I lived and breathed climbing, so I figured out how to make it happen all the time, thus evolving into my current career.

What is your favorite climbing genre?

I am pretty partial to bouldering, although I’ve found myself gravitating toward multi-pitch and traditional climbing lately. My favorite place to climb is Rocklands in South Africa; it feels like my second home.

You sent your first V13, Ray of Light, in Rocklands this past July. How did it feel to join the few women who have sent V13?

It definitely feels cool to have sent V13. When I climbed Ray of Light, I got a lot of questions about whether I focused on my ascent being an FFA, and, to be honest, it was a total afterthought. It didn’t add anything to my experience other than an

kind of feeling after I sent. I heard that other women started looking at Ray of Light and giving it attempts, which I thought was pretty cool too.

What is your opinion on the “FFA” designation?

I am actually in favor of the FFA, which I think is kind of an unpopular opinion. I believe there is no definitive right or wrong answer, and that both opinions are ‘right’ in their reasoning, depending on perspective. I’m trying to dig deep on this question because my feelings are conflicted, and I’m still figuring them out.

The majority of my elementary and high school education was based in an all-girls school, and I gained an incredible sense of sisterhood from my female friends. We were taught to celebrate our achievements, not because we were women, but because we realized our vast potential as human beings and had this positive support system to reinforce that. I’ve found female climbers that have given me this same positive support.

Perhaps because of this background, I like hearing about other women’s achievements. My fellow women inspire me, not because I see men on an incomparable level, but because I have seen women accomplish incredible things.

There are many women (not just in the climbing community) who are discouraged by comparing themselves to men and look to other women for encouragement. When I see “FFA” next to an achievement, I don’t see it as a ‘second place’ ribbon or a measuring stick against what has already been done by a man. I see it as the celebration of a woman who has pushed her limitations and achieved her goals, which in turn can inspire other women who might need that extra push.

That’s why I don’t see a problem promoting my ascents as the “first female” because if it motivates other women to take that first step and push themselves, then it’s all for the better.

Related: Sexism and Rock Climbing: A Conversation That’s Still Worth Having

How do you get psyched on a project?

I generally like aesthetic, taller climbs with scenic backdrops. I’m also a sucker for cool names, so if a problem name resonates with me I’ll be more inclined to try it.

Once I have a project in mind, it’s easy for me to stay motivated for training. I get obsessed with climbs that I really want, and I won’t stop thinking about the project until I’ve done everything in my power to succeed at it. That includes staying fit and working specific movements for that climb. Once the goal is achieved, I feel a little lost and have to re-motivate by finding the next adventure.

What is your typical training schedule?

When I’m on a training schedule, I’ll train 3-4 days a week that are focused on climbing or climbing-specific exercises—generally finger-strength, power endurance, legs, and core. I’ll have 1-2 days of active rest, which can be anything from biking, hiking, or running to climbing outside. Then I’ll have 1 day of absolute rest when I get to just chill, which usually involves sleeping in, a big cup of coffee, and a to-do list, so I feel productive.

If I’m just psyched on outdoor climbing I usually follow a 2-3 days-on and 1-2 days-off pattern, depending on what I’m projecting.

You’ve competed in several indoor competitions, including ABC Nationals and the World Cup in Vail in 2013. How does indoor climbing and competitions fit into your climbing priority list?

Competitions drove me throughout my younger years because I was part of a team. When I moved to Colorado, I became more involved in comps, but I felt that the ‘team’ aspect was diminished. I started putting too much pressure on myself, and it wasn’t as fun anymore.

This past year, I focused solely on outdoor climbing and purposely avoided indoor competitions to give myself a break. I think my days of serious competing are over. There are many other aspects of climbing I would like to explore. When I do [compete], it will be purely for fun. I’m interested to see if I do better with no inner pressure.

What are the challenges and rewards of climbing professionally?

Climbing is already a time-consuming sport, and climbing professionally is even more so. Nearly every decision I make revolves around my climbing: diet, travel, training, time management, online persona, even friendships and relationships. It’s challenging in that it’s a 24/7 job with no vacation. But it’s also like being on vacation all the time. I think the phrase,

If you love what you do, you never work a day in your life

Climbing is a pretty low-paying job with no security or benefits for the future. There’s always the risk of injury or burnout, and then what? But that’s also the strange beauty of it. We climb for the inherent desire, for whatever we find in climbing that makes sense to us, despite the risks, the uncertainty, and the low rewards.

How do you deal with injury and injury prevention?

I have been fortunate to avoid any serious climbing-related injuries over the past 13 years. I’ve had minor finger tweaks here and there but nothing that one or two weeks off wouldn’t fix. My worst [injury] was a Grade III separated shoulder five years ago from literally just falling over, and I had to take three months completely off with another month of rehab and very easy climbing after that.

At the time, I was pretty upset and just dove into work and anything that would keep me busy; I didn’t want to think about climbing. But I’ve always known I wanted to climb for the rest of my life, so three months was nothing compared to all the years I have ahead of me.

Now I realize how lucky I’ve been with my lack of injuries, so prevention has been a new priority. I’ve always been pretty bad about stretching, training antagonist muscles, and general preventative measures. I started working with Revo Physiotherapy in Boulder. I’ve already learned so much about my personal physiology, and how to improve my form, posture, and muscle symmetry.

Do you have any current projects?

I have a sport route I’m training for called China Beach (5.14b) in Rumney. It was one of the first routes I ever saw when I started climbing outside, and I wanted to jump right on it without knowing the difficulty. Now I feel slightly more prepared for making that nostalgic dream a reality.

I also want to make another trip to Bishop and attempt Evilution, the full line, (V11) and possibly Ambrosia (V11). I think it would be cool to complete the Grandpa Peabody ‘triple highball threat’—Footprints (V9) is already done. However, I haven’t tried the cruxes of Evilution or Ambrosia, and I won’t fully commit unless I know I can do it.

My long-term goal is to get better at trad climbing. It has the demanding mental challenge of highball bouldering without such absolute consequences.

Where do you see yourself in five years? Ten years?

Five years from now I hope to be at least as strong as, if not stronger than, I am now. I’ll be 30, so I feel like peak-fitness will be slightly harder to maintain.

Ten years from now I hope to be smarter than my current self, with my life a little more organized outside of climbing. I would like to become a well-rounded climber in that time, with some hard sport and trad routes under my belt. Overall, I’m in the never-ending process of discovering who I am, so I hope to accomplish the right choices that will reveal that in positive ways.

Thanks for sharing your insights and ambitions with us, Nina! We wish you the best of luck this season and can’t wait to see what you do next. 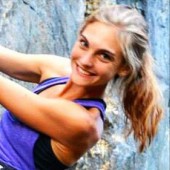