Belaying from a Backpack — The Difficult Alternative to Van Life These days, one can hardly take a casual scroll Instagram without seeing #vanlife at least once. It is one of the most trendy adventurous lifestyles of the modern era, offering ways to minimize, simplify, and make the most of what matters.

In all its popularity, lest we not forget that climbers were the original vanlifers, dirtbags who shrugged away from the burdens of society to go live in vans and illegally camp in national parks until they were discovered and kicked out. For the climber, a work-free existence meandering from crag to crag is the ultimate dream. A year ago, my boyfriend and I set out to realize this dream.

But we took it a step further …

We sold what we owned and ran away from the modern world on a backpacking trip of indefinite length through Central and South America. On our backs, we carried roughly 30 pounds of backpacking and camping gear each, in addition to our extra 20-pound rope bag, literally bursting through the seams held together with climbing tape, a 70m rope, nine quickdraws, two harnesses, an ATC, a few strands of webbing, and a handful of carabiners. Our climbing shoes and chalk bags hung like little key chains from the tops of our towering packs. We made it through airport security purely on our word that the white powder coating everything was not, in fact, cocaine.

Over the next five months, we traveled through eight different countries on two continents, bouncing on rickety recycled school buses, known fondly as chicken buses, from one sparse undeveloped climbing spot to the next. We had no guidebooks, no beta, and no real understanding of the language, but we did have optimism in abundance.

Even that wavered sometimes, on occasions when we traveled far out of our way to go to a specific crag— perhaps the only one in a country—only to be rained out for days on end, or when we took weeks off climbing simply because there was none to be found. Yet despite disappointments and difficulties we persisted, sometimes going to extraordinary lengths just to get on the wall.

We hitchhiked to crags outside small villages and desperately pleaded, “Escalada?” to locals to ask for directions. We scrambled up difficult and unmaintained approaches only to get to the crag and scratch our heads at where the climbs were. We sent dirty and mysteriously graded climbs on everything from coarse volcanic rock to polished basalt, clipping into protection of questionable integrity and hoping we wouldn’t fall. We spent an insufferably hot day in a broken, cave-like gym in San Salvador with wooden roof panels that creaked and bowed downward with body weight. We struggled to shove our massive packs onto crowded buses and cradled the rope bag in our arms like an infant, though sometimes we just wanted to shove it out the window and leave it among the trash piles on the side of the road.

But more than anything, we questioned whether or not it was all worth it.

Through our travels, we met a total of two other traveling climbers; one biking from Argentina to Alaska, and another who had been studying in Colombia on a vacation in Peru. Neither carried ropes or gear racks. Only shoes on the off chance they stumbled upon a local climbing buddy or bouldering gym. No one, not one single person, was willing to haul their full climbing gear on their backs for so many months.

Honestly, I don’t blame them.

While backpacking and dirtbagging come from the same vein of thought, the two are just so oppressively difficult on their own that combining them into one single lifestyle is just … insane. There is little question as to why few have sought to combine the two lifestyles. It’s hard. It makes the idea of a 9-to-5 office job seem almost appealing. Almost.

But’s that what climbers do; we put ourselves in positions of immeasurable pain and discomfort for the thrill of the send. We tear up our bodies, our hands, and our spirits, then tape up and jump back on the rope at the quickest opportunity.

So even though I look back on those days and often wonder what in the hell I was thinking, I secretly plan my next getaway in my head. Because even if I had only gotten to climb once in that whole five-month trip, the answer to that earlier omnipresent question would inevitably be,

Our 40+ most popular articles ever
Today’s Best Rock Climbing Gear Deals
200+ rock climbing videos
Essay: What a Long, Strangely Normalized Trip It’s Been—The Role of Counterculture in Climbing
“I Will Climb, Too” — A Story on Mentorship and Responsible Climbing
The Dirtbag Dream, and How it Nearly Ruined Climbing For Me
Essay: To Suffer Well — An Ode to Grit
Essay: New Conquerors of the Useless — Achieving Nothing in a World Obsessed with Doing Everything
Essay: How to Climb When You’re Not Alex Honnold
Essay: A Bad Month, Or, The Broken Man’s Guide to Climbing
Will You Be My Trad Guru?: The Importance of Apprenticing in the Gym Climbing Era
Get daily updates by Liking us on Facebook
Free rock climbing PDFs on technique, training, knots, and more 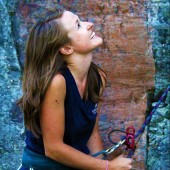