Chasing the Ravens: 6,000 Miles on the Wings of Dean Potter There were moments of significant doubt when, after waiting patiently, I received the news that I would not be granted the job I was hoping for. My current contract was quickly coming to an end, and it was then that I realized unemployment was anticipating my arrival just around the next corner. It wasn’t going to jump out and take me by surprise, no. Instead it made its presence known, expanding into the largest form of itself, purely for intimidation purposes. I looked for answers in the friend I knew would have sound, solid advice. He always does. And after spending a while strolling through the downtown streets of our city, he turned to me and asked, jokingly, “What would Dean say?”

The answer was simple, immediate.

To us, to think of Dean Potter was to think of a highly respected renegade, controversial in his actions but no less inspiring to so many of our generation. A world-class climber. A dog lover. A boundary pusher. Sometimes, a law breaker. When news of the accident came, it hit us. I had climbed for years but had only recently started considering myself a climber, and Potter’s passing was a hard realization that there was now one less of us. I wasn’t prepared for the worst happening to our best. At the same time, we knew limits come with risks, and reasoned that to Potter, 43 years with meaning were worth more than 86 without.

I had been to Yosemite Valley years before, before my days as a climber and long before my hands had grazed any rock. Even then I knew I had to return. The place itself had left a lasting impression with mysterious grandeur scrawled all over its tall walls. After seeing a screening of Honnold soloing Half Dome; after spending $43.00 on a hard copy of Valley Uprising so that I could watch it, share it, discuss it, and then watch it again; after learning the history behind the park and Camp 4, its significance grew exponentially. Robbins, Hill, Honnold, Potter. Stomping ground of The Great Ones. It didn’t take long to decide that the desert would be my first stop, but Yosemite would be the ultimate destination of my flight.

And so I set out with slight trepidation at what the following months would hold. I had no real plan, and minimal experience living out of the back of a car. But, really, I thought, how much preparation did that need? Whispering words of encouragement to Belle, my little white Accent, I drove from Ontario to Utah with a mission, not caring what was in between but only what waited for me in the Southwest. There’s no way I could have predicted what I found there. The desert and I formed an instantaneous connection. I started chasing Potter’s presence in every direction I could. Just outside of Moab I was caught by surprise when, hiking around that last corner, my eyes fell on Delicate Arch. It seemed so vulnerable, standing there against a gray sky as the Utah wind blew with authority; standing in juxtaposition with the La Sal mountain range so powerful behind it. This was a divisive spot in Potter’s career, and I immediately understood why. Hearing rumors of “the cave” close by, my climbing partner and I also went in search of Zen Garden (V8), following washes with pure faith in the local’s directions. We found it, and touching the split in that sandstone roof, I placed my amateur hands where Potter’s had been so skilled and deliberate before me. The result was immediate: a torrent of emotion. Admiration. Inspiration.

My feet took me to unforgettable places, but it was with my 70-meter rope I learned the most. Arriving as a moderate gym climber, I thought that my recent lead course could take me anywhere I wanted to go. Naive or idealistic, it didn’t matter; everywhere I looked there were techniques I’d never tried, terms I’d never heard, and ultimately, the requirement of skills I just simply didn’t have. To climb in the desert was to be reduced back to beginner status. You’re out of your league, Miss Bobbi, were the whispers I heard in the air.

It came as a surprise, then, that one of the most impressionable experiences came in the form of Indian Creek. I had resisted the repeated suggestion to attempt the Creek under the premise that I had never touched a crack before arriving in the Southwest, and the desire to repeat my one experience was mockery in its finest form. Was there any face climbing? I vaguely remember being politely laughed at in response. I didn’t yet know that there, bolts may as well be sacrilegious. But against all odds, I found myself thinking “When in Rome.”

Upon first impression, I was overwhelmed by its pure, natural beauty. Mouth agape I drove past miles and miles of meandering red buttresses bearing an infinite number of splitter cracks. Miles of the most simplistic lines in the most intricate of landscapes. It was as magical as Yosemite was majestic. Any climber, amateur or expert, would hear those routes calling. I knew that to answer meant to accept the challenge of frustration, agony, and all of the other descriptors I’d heard and so briefly experienced. But to let those calls ring would be a sin.

My first day was every bit as humbling as I had expected. The second, no better. Each new morning I awoke with painful new bruises to my hands, legs and mentality. My muscles craved rest. My mind craved anything easy. But I had the determination to get to the top of a true Indian Creek crack. Finding comfort in discomfort became my mantra; this is not permanent, my mental green light.

Finally, after days in the boxing ring with that unforgiving place, I found redemption when my left hand locked deep into Elephant Man (5.10) while comfortably chalking up with my right. In that moment I knew I’d met a goal that two months prior hadn’t existed, yet one that had come to hold much significance. I had finally jammed my way to the top of the Creek, and the view from up there opened up a perspective I hadn’t ever expected to see. My timeline had already been pushed; the road was waiting. I knew it was time to say goodbye, yet doing so meant to leave behind a place and people who had become such a large part of my life. The desert had been a teacher, who so clearly demonstrated how remarkable goals can be achieved. Perhaps even more so it had come to be a home, a home to a community that exemplified inspiration, encouragement, and belief. It wasn’t me that had continuous faith in reaching my goals. It was those that surrounded me, and those that propelled me to reach them. For that I will always be grateful.

As I entered through the gates of Yosemite, I raced along the winding road determined to secure a spot in Camp 4. Making my way onto the valley floor, the impressions those granite walls had left me with years before came rushing back. Although my trip continued past my time there, the journey unquestionably culminated in a hike up to Taft Point, the setting stage for Dean’s fateful jump.

After continuously losing myself on the snowbound trail, I arrived frustrated. That frustration, however, quickly dissipated into the view that opened up before me. It was a view that encompassed The Nose, the Falls, and all the magnificence that is Yosemite Valley; a view of green and granite last seen by Potter; a view that could not fail to renew and inspire. I sat, absorbing the moment, but suddenly found myself feeling vulnerable which was quickly followed by a surge of emotion. Confused, I tried to pinpoint the origin. Were these tears for Dean? For the raven that somehow chose this minute to fly overhead? Were they for this journey, which had delivered so much more than I had anticipated?

As I gave in and let them spill over, it was then that I realized they were not for any of those specifically, but in essence for all. As life, in all of its intricacies, can be exceptionally beautiful depending on that one simple view.

Before, during, and after my time away, I have asked what it truly means to fly free. Perhaps it is to leave comfort behind and to challenge. Perhaps it is to detach from society’s expectations, or expectations that we set for ourselves. To stay true to that which is important to us. An experience? A state of being? The answers can be plentiful.

Our respected renegade found meaning in freedom and used climbing as part of that expression. The search for my meaning continues, but I now know that our sport holds a much larger presence within it. Challenge. Growth. Simplicity. Staying true. 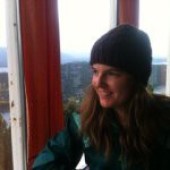 Bobbi is an aspiring climber in Ontario, Canada, where cracks are in limited supply. Outside the harness, she can be found on the trails, atop her yoga mat, and counting down the days until she can get back to Indian Creek (182).