The Dirtbag Dream, and How it Nearly Ruined Climbing For Me For years, I’ve had an unshakeable and inexplicable sense of discomfort hanging over me. It only got worse as years passed. I’d assumed it had something to with vague confidence issues and pushed it away as best I could.

In so many ways, climbing helped quiet the background buzz in my head. It resonated with me: my slender frame and +2 ape index were advantageous; rope systems and other technical aspects made sense in a world where the nuances of team strategy (and dealing with people in general) often left me confused and indecisive; there was no competitive pressure, just me and the rock.

Through climbing, I felt confident and competent. As I gradually advanced from gym gumby to sport and finally to trad, the draw towards the dirtbag dream became ever stronger. I couldn’t stop thinking about climbing, and though I devoted nearly all of my free time to it, it wasn’t enough. Because my job was unfulfilling and the contrivances of city life weighed down on me, it was obvious that I needed to drop my shit and devote a good chunk of time to climbing full time. So I did.

After months of scrimping and saving, moonlighting as a bartender and working 60 hour weeks, I finally initiated #vanlife and lived the dream. For 7 months, I climbed my brains out: Potrero Chico, Hueco Tanks, Moab, Indian Creek, Red Rock, Joshua Tree, Yosemite, Leavenworth, Squamish, Jasper, Banff, Devil’s Tower, Spearfish Canyon. Life was bliss when moving on rock, but that shadow kept creeping back.

After driving across the continent, visiting dozens of towns, meeting hundreds of dirtbags, and spending countless hours alone and living in my head, I finally realized that my inner discomfort is rooted in a feeling of not-belonging. The problem is that we live in a society dominated by whiteness, and I will always be othered because I am not white.

This road trip has forced me to face this inescapable truth: I exist in the white man’s world but I do not belong in it. Everywhere I go, I have no choice but to come to terms with white supremacy.

Once, I met a tall, ruggedly handsome, Instagram famous, white male climber who told me he didn’t drink or smoke pot anymore because he was “in a good place.” Though he was an extreme, I met so many others like him in varying degrees. The hardcore climbing scene is dominated by well-adjusted, heterosexual, cis white men – the absolute pinnacle of privilege. I couldn’t believe that the general attitude was one of non-conformity, of living on the edge.

I am an Asian-American man and this has largely been a humiliating experience. In media, we’re stereotyped either as mysterious and foreign or as small, nerdy, bumbling accessories to capable white protagonists. Interracial relationships often involve Asian women but rarely Asian men. Society tells us that we have tiny dicks and are effeminate.

During basic training (I spent 6 years as an army reservist), drill sergeants immediately nicknamed me “Jackie Chan.” Being in public with other Asians would inevitably lead to racist comments by some white guy (and it’s always a white guy). Dad encouraged me to squeeze the tip of my nose, making it less broad and more like pointy white noses. From all directions, we are othered and made to feel like we don’t belong. I grew up feeling hideous and invisible, and often still do.

From these experiences, I came to associate Asians with impotence and a failure to assimilate to American culture, so I assumed what I thought was a post-racial American identity. In practice, it was really just the pursuit of whiteness; I abandoned my Korean community and socialized almost exclusively with white people. With other Asians I was vulnerable, so I used white people like armor and fed off their privilege.

I tried to be the ultimate white man: competent, well-spoken, well-dressed macho, confident, rational. I exuberantly entered the Great White World of Climbing. I even enlisted in the army to feel more American. In the end, none of it worked; I was just going through the motions and never achieved the effortlessness that so many white men have.

No doubt, Asian-Americans are a privileged group. Just like white people, we can drive across the country without ever fearing the police. We show similar success in schools and corporations. There are more Asian climbers than any other people of color (POC). But this is the problem: because we don’t fear for our bodies and often exist in the same spaces as white people, we’re made to feel as if our experiences as POC are not relevant.

The truth is that we are oppressed by the same racist Western attitudes that hurt all other POC. So it’s time we finally shake off our bullshit model minority status and speak up for ourselves and for other POC. It’s time other POC stop seeing us as proxies for white people and accept us into the fold.

Despite its many problems, climbing has still been a positive force in my life and it continues to give me joy. That being said, I’m a hell of a lot more skeptical of the hype now. We are desperately in need of a culture shift, and that starts with everyone recognizing the white privilege that’s so pervasive in the sport. We need more climbers of color, LGBTQ climbers, female climbers.

Even if you don’t belong to any of these groups, you can still help—take those diverse friends of yours to the crag. Teach them to lead. Introduce them to other climbers like them. Feature them on your social media feed. Believing that you can be a neutral participant will only perpetuate the problem. So for the love of climbing, do something, because you can’t do nothing. 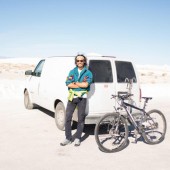