The Ditch — A “Desertneering” Trip Report from the Grand Canyon

Welcome to the Grand Ditch; Northern Arizona’s contribution to the seven natural wonders and a should-be world-renowned destination for adventure climbing and choss wrangling alike. This 277-mile long maze of canyons and tributaries have long been known to attract adventurers wishing to pay homage to the great Colorado. Stereotypically this exploration has taken place throughout the widespread trail system below the rim or aside an oar atop the Colorado itself, both of which offer a phenomenal Canyon experience. Yet for those of us who are vertically inclined, the Grand Canyon holds quite the secret.

As a newcomer to the Southwest three years ago I received quite the awakening during my first trip below the rim. I was a newly turned Prescott College student just beginning my journey through the endless top-tier climbing destinations that Arizona has to offer. Naïve and unaware of the collection of tales, topos, and testimonies that make up the climbing history of the Canyon, I wandered throughout the strata of the Colorado Plateau drooling over the would-be climbing opportunity here “if only the rock was any good.” Fast forward three years of learning the history while getting humbled along the walls of the southwest, and my comprehension of “desertneering” had evolved into an eye-opening, new world of climbing within the Grand Canyon.

The first thing that every desert rat learns upon dragging a rope and rack 6,000’ below the rim and back out again is that the only “money” climbing in the Canyon takes place along the Coconino; a not-quite-Wingate-quality layer of sandstone that forms a band of white rock roughly 600’ thick among the upper layers of the Canyon’s walls.

For the majority of the Canyon’s history, climbing endeavors have begun and ended with this layer. Summits have historically been accessed via long approaches through breaks and defects in the larger strata, scrambling through short layers of broken rock, and a grand bit of short-lived vertical fun along the Coconino, usually culminating with a maximum of five pitches.

That was, until a team of four climbers from three different countries put up the first ascent of the NW Ridge of Comanche Point over three days. The route quests through 2,400’ of technical climbing over half of a horizontal mile and allows anyone with a warm acceptance of removable handholds and a willingness to undertake the 15-mile round trip approach an incredible alpine-style ridge experience thousands of feet below the rim of the Colorado Plateau.

Better yet, being late fall again it was nearly a year since my last humbling type-2-kind-of-fun mission into the Ditch and just about all of my good sense had since escaped me. In other words, an attempt at the probable 4th ascent of the NW Ridge of Comanche Point sounded like the exact shakeup style route that I was yearning for.

At the time I had by chance been cragging along the Eastern Sierra with a long time Prescott College friend and my go-to Ditch suffering partner Arthur Herlitzka. After floating the idea his way, and of course, spraying a healthy portion of stoke and excitement—the key ingredient in convincing any likeminded friend into doing something ridiculous that every teenage boy discovers—we were on the hunt for any information we could find on the route. Finally after properly interrogating the Internet of any useful information and questioning a fair share of Canyon gurus, we had a larger list of questions than when we began, and just enough psych and ignorance to go along with the mission anyhow.

After spending a day hovered around CalTopo, pack-packing, and pleading with my girlfriend to help us stash a spare vehicle among the maze of Forest Service roads within the Park, Arthur and I enjoyed every minute of snooze time before a series of obnoxious alarms and Alpine Start coffee woke us up at 11:45 pm. It was the perfect amount of time to allow for 12 minutes of groaning and rolling around in our sleeping bags and 3 minutes of furiously chugging coffee and cranking down the laces on our blown out approach shoes before our intended midnight start time. Though as every proper alpine start should, we began five minutes late and buzzing off of far too much caffeine.

If I’m honest, the approach from Lipan Point to the base of our route was mainly a blur of painful downhill pounding along miles of trail, refueling and rehydrating off Good-to-Go and the mighty Colorado, and blindly stumbling up more mud than rock to the access gully of the NW Ridge. Our mission wasn’t really real until mantling over the 5.10 entrance moves onto the ridge proper, which simultaneously keyed us into the fact that this was quite the route for a couple of Canyon gumbies to be taking on after finding our way to the summit of only a handful of classic temples and buttes below the rim.

The ridge quickly developed into a knife-edge section of Redwall Limestone, where out of no other option we defaulted to a Fairbanks belay, a running style of belay where if one climber were to slip from the ridge their partner would react by jumping off the opposite side. Still, as we were to continue to discover for the majority of the route, our best pro was found in the constant stream of jokes and hilarious comments we kept up to distract our minds from the lack of real pro we weren’t placing.

As the sun began to rise Arthur ventured into the route-finding crux of our day, a chimney/cave system that took us nearly two hours to squirm our way out of after countless minutes of profanity and uncontrollable laughter (on my part). Luckily falling into the lead on this section of the Redwall, Arthur enjoyed the claustrophobic pleasure of continually getting himself stuck and unstuck among the depths of the chimney system before discovering a tunnel that eventually led us out to the now comforting daylight of the morning. Concluding our on-route spelunking adventure, our day continued as expected along the ridge via pitch after pitch of sparse to completely unprotectable strata, intermixed with bands of mildly cohesive Supai until we finally stood beneath the golden-white Coconino.

Unable to identify the other two previously completed routes through this section of the ridge, we climbed through three pitches of various corner systems, which similarly to the other routes seemed to clock in around 5.10. Ecstatic to be carrying our rack on our waist instead of in our packs, this few hundred feet of perfectly vertical sandstone seemed to disappear in a matter of minutes until suddenly we stood below Comanche Pinnacle; an objective spectacular among itself, which signified the end of the Coconino and the final couple hundred feet of 5.7 – 5.8 chimneys that would lead us to the rim.

Once again consumed by night, we concluded the route smoothly with the loss of only one headlamp. In total we completed the route in 23 hours and 6 minutes, likely tagging the 4th ascent of the Northwest Ridge of Comanche Point. Still, in the land of modest desert lovers, undocumented canyon exploration is never unheard of. For if you knew of every cutting edge Canyon escapade around then you’d be missing out on a truly proper welcoming to the Grand Ditch. 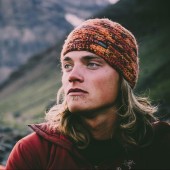