Essay: The Adolescent Identity Crisis of the #Vanlife Movement Is the #vanlife cracked up to what it should be?

As a recovering #vanlife guy, I am glad to be done, in the current flux, with this viral movement in its adolescence. While I think the things one learns from living in a van or tiny vehicular space are worthwhile and potentially life-changing, I don’t think the prevailing trend of big and noble mobile spaces are encapsulating of what #vanlife meant to me.

The first van I owned as a wandering dirtbag in the West was a 1991 Toyota Previa. I had bought this van on a whim because a) it was downright affordable, just $1,100 cash, and b) it was near where I lived and could fit all my stuff, which at that time and currently still, isn’t much. I had no vehicle then and had been commuting to work via bike or borrowing friend’s cars. And this was in the midst of a Colorado winter high in the Rockies.

So from the get-go, I felt I had the fortitude to tackle the #vanlife—but this was before #vanlife was truly a thing.

I wouldn’t call myself a pioneer, but I will make mention that I’ve been mysteriously fortunate and oddly spaced in my arrival to trends before they were trends. I can remember in early high school, my friends and I would browse the selections of hand-me-down t-shirts at the local Goodwill just so we could be the first to represent gems that had been discarded by previous owners; creative creations from the 80s that seemed akin to the letter jacket and aviator sunglasses. We thought we were so cool, and at that time while we were cool, we were also weird.

Others didn’t necessarily get our style nor our insistence for these off-the-wall t-shirts, but we felt deep down that we were originals in a hall full of Abercrombie & Fitch wax replicas—and if nothing else, we were being true to ourselves and our desire to express who we were. This early flirtation with what may be viewed as trendsetting, before trends were a word that mattered (at least to young, teenage men who had other things on their minds), would continue to be present in my life—namely in the arrival of dirtbag life.

My first encounter with a true dirtbag was not all too long ago. It was the summer of 2009 … mind you, a third generation dirtbag. The Jack Kerouacs and beatniks of an earlier generation had already come and gone, as well as the dirtbag climbers of the Yosemite big wall scene in the 1970s and 80s—leaving their impressionable thoughts on generations yet to materialize. He was driving a beat-up and expressive 1988 Mazda 2-door coupe, complete with a homemade paint job of red, white, and blue iterations that captured his expressions and thoughts of his life. Dubbed the Freedom Mobile, this tiny travelling pod on wheels had been his home for a number of years, and in addition to serving his needs on a daily basis whilst living outside of town on BLM land in a tent, it had also morphed into storage for all his belongings when it was time to travel to that next spot, house-sitting gig, or town.

Impressionable as I was and prone to original trendsetters, I had no clue how much that traveling bucket of bolts would awe and inspire me a few short years later when I first would find my own mobile cube home.

During the times, not too long ago, before hashtags became vogue to use in social media statements, cars, trucks, or vans served as means to an end. For a dirtbag, this meant living the dirtbag lifestyle and using the vehicle either as a home or a way to travel, or usually both. And almost always, these vehicles were second or third-hand afterthoughts, nothing like the intentional and flashy rigs that people call their home on wheels now.

Before this, celebrating, for example, a vehicle’s 21st birthday and legal right to consume in the United States, actually meant something. Almost as if the vehicle itself was on a parallel journey with you; having met each other at the right time/right place.

Unpredictable at best, though just the correct mix of adventure, these vehicles, like the rotating carousel of dirtbag life, offered spice when you were wanting sweetness; shelter from the cold or rain; and, solitude when you needed just that. They were intentional mediums mostly essential to the dirtbag life; just means to an end. Though, generally, through an uncalculated series of events or good fortunes—happenstance in their arrival and the niche they helped provide—these vehicles, in turn, provided normalcy to blend into everyday life. They weren’t too flashy, though occasionally they had original flair—like spray paint or unique names to convey their characteristics. Essentially, they were far from the blatant mainstay or focal point of today’s #vanlife’s instance and cry for attention.

When I think of the vans of today, they’ve morphed: large, white, and gleaning, kitted into 6-figure ranges. They no longer, in my opinion, convey the essence of what life out of a vehicle means to a dirtbag. It is equivalent to a small, rusty dingy on the ocean pulling up beside a large and expensive 2-story house boat. They seem to bear nothing in common besides a medium for adventuring; albeit, one in grandiose, sometimes obnoxious style, and the other in service to a humbler existence.

What gives this self-proclaimed dirtbag the right to smear people’s vehicular expressions on what living the ‘simple’ life means to them?

And you are right; I am going out on a limb and taking jabs at a subculture that has seemingly sprung overnight into the limelight of young adulthood’s modern era. And, as I first assayed, I am a recovering #vanlife guy. I’ve been a recent owner of a modern-ish rig, big and tall like the large Sprinters, and convenienced to the gills, and what lays foundation for my pronouncement is the whimsical route in which I first arrived at the scene—a route that I believe has been all but forgotten in today’s immediate glamour of what it means to be living the #vanlife.

I’m not saying that this movement, which has inspired thousands of young adults to embrace a more meaningful and simpler take on life is negative, nor non-contributory to learning and growing in self; however, I will say, it has redefined what it means to be a truer dirtbag.

Dirtbags, in essence, lived on very little and owned very little—nothing but the essentials to fuel their lives and iterations of adventure. What we have nowadays, in this trending movement of social proportions, is an emerging subculture that blends and distorts the roots from which it sprung. So really, if nothing else is gained as result of reading this discourse, perhaps there can be agreeance that modern #vanlife is its own unique, sometimes narcissistic and self-fulfilling social movement, that blesses a variety of young and middle-aged adults with the abundance to experience life closer to the edge, but not necessarily on the edge—like dirtbags of an earlier iteration used to on a daily basis.

The #vanlife is a casual approach to dipping one’s figurative toes into a pool of unknown consequences whilst watching the dirtbags of yesteryear float aimlessly, with large smiles on their blissed faces, in the currents of life.

In wanting to sound more like a former van guy who promotes the lifestyle and less like a crusty has-been, I would offer these final thoughts: you can live your life how you please and through whatever medium you please—if it ain’t hurting others, then I’m all for you doing you.

Remember though, to call yourself a dirtbag and then drive around a rig that easily costs thousands of dollars, is to skew the literal meaning of what dirtbagging has represented for generations, and you’re best off sticking to a label as modern as this new, more simplified expression of what life closer to the edge means: #vanlife. Nothing more, nothing less—uniquely just that: a subculture bearing headway into the growing pains of #adolescence.

Al Smith III is the co-founder of The Climbing Zine and a recovering #vanlife guy. Having bought a Sprinter and building it out based on experiences in two previously smaller dirtbag vans, he opted to cash-in on his project to build a simple home for himself, rather than suffer the adolescent identity crisis that comes with the growing pains of the #vanlife movement. He currently drives a Subaru Outback and has found that sleeping on mother nature’s bed under a tree is just as freeing and way more simple than the comfy queen size mattress in the back of a Sprinter van. You can read more of his ramblings and muses here.

Our 40+ most popular articles ever
Today’s Best Rock Climbing Gear Deals
200+ rock climbing videos
Essay: What a Long, Strangely Normalized Trip It’s Been—The Role of Counterculture in Modern-Day Climbing
“I Will Climb, Too” — A Story on Mentorship and Responsible Climbing
The Dirtbag Dream, and How it Nearly Ruined Climbing For Me
Nursery Rhymes, Biomechanics, and Bad Attitudes — Why I Stopped Climbing
Interview with Dave O’Leske, Director of Dirtbag: The Legend of Fred Beckey
Essay: Words from Conservationist and North Face Founder, Doug Tompkins
Essay: How to Climb When You’re Not Alex Honnold
Essay: A Bad Month, Or, The Broken Man’s Guide to Climbing
Will You Be My Trad Guru?: The Importance of Apprenticing in the Gym Climbing Era
Essay: Looking for a Partner, Pants Off Limits
Get daily updates by Liking us on Facebook
Free rock climbing PDFs on technique, training, knots, and more 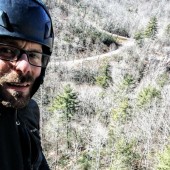 A creator of creative writing with a preference for minimal ownings; climber and lover of all things outdoor adventure; former full time van-dweller; and dirtbag at heart.