Adventure Lust Leads to Beta Bust: A Story of Risk and Reward It had rained the last three weekends, a rarity in central Arizona. I was sick of the same old plastic and was determined to get outside. The nine-to-five lifestyle had begun to eat away at my recently graduated soul, and there was only a slight chance of rain anyway.

This was the weekend I was going to hit up the unknown route.

My climbing partner and I have a slight obsession with the old school adventurers. The guys who paved the road for climbing and took chances were bold. We are the guys at the crag and gym who refuse to take, and holler at one another to finish the route. Nine times out of 10 it is all mental and when pushed we both make it to the top.

These are controlled risks. We know the anchors at the gym and the crag are good and we know one another’s ability. That little tinge of daringness, of pure adventure, makes us feel like those climbing heroes of ours.

So, when my partner and I stumbled upon a line of bolts while rappelling down a middle-of-nowhere, 550-foot canyon wall, our stoke level was high. We scrounged the internet, early guidebooks, and the climbing community for beta and found only a few sentences on obscure forums.

We found a rarely climbed, undocumented, middle-of-nowhere route with no blaring music or hangdogging? Climb on. We packed the car full of camping, climbing, and canyon gear and headed out. We were a tad anxious the night before, but a few beers and some good company in the Superstition Mountains eased our nerves.

We started early the next day. We parked a car near the canyon exit and put our climbing gear in it. We headed back up towards a drop in point for the canyon, grabbed our canyoneering gear, and hiked to the big rappel. Upon arrival, we noticed a little trickle of a waterfall, the intense exposure, and some cruddy overcast, windy weather. We rigged our rope and headed down. We easily found all the rappel/belay stations for each pitch, but the bolt line was harder to follow, though easier up the first three pitches.

We touched ground and discussed our options. There was no rain, no thunder, we had food, water, beta—and if we kept our bodies moving, we stayed warm. We decided to make an attempt.

We swapped gear at the car and headed back up to the wall. The first two pitches were 5.6-5.7, overly protected with shiny bolts.

We easily linked them together and continued onto a slightly harder third pitch with less protection but the same obvious bolts. The third pitch ended on a large ledge a little more than halfway up, around 250 feet and at the start of the fourth pitch.

This is where the lust for adventure became too intoxicating.

My partner and I looked up from the belay and could barely see a dark colored bolt, almost in the watercourse. We saw the next belay anchors and felt comfortable about the direct route, anticipating the next bolt to just be camouflaged (considering the runout thus far had been minimal).

I swung into the lead and started my way up. We realized it was a tad chossy so I down-climbed and climbed slightly out of the perceived bolt line. I made a traverse over to the bolt and clipped it. I continued, determined to finish the route but unable to find a bolt.

I got about 25 feet above the previous bolt and finally saw the next one … on the other side of the tiny, trickling, waterfall. I I looked up. Only a pitch and a half left to attain a little bit of glory and a victory beer for conquering this rather easy climb. Then I looked down and analyzed the risk versus reward.

Freezing, a little wet, over-gripped, pumped, close to bonking, and discouraged, I began to down-climb. I got to my last clipped bolt, unclipped and descended the last fifteen feet to my partner. I fully anticipated a little joking harassment, a push to try again, and other quips. Instead, he opened his bag and cracked open a victory beer and said,

So, that’s what it takes for you to back off a climb? Good call.

We hailed it as a victory, finished our beers and rappeled down to the car. Sometimes, backing off is as important as pressing on. Don’t get blinded by that adventure lust. 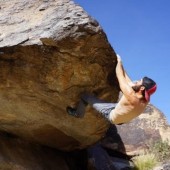