Climber Confessional: On Listening to Your Gut and Your Child A few years back I was teaching my daughter how to belay me on sport lead. We were at a small climbing area with very short climbs. I was on an easy 5.5 that was about 20 feet in height.

I had clipped the second bolt and told my daughter I was going to climb up another foot and fall so she would get an idea what catching a lead fall felt like. She was only 13 at the time and was scared. She begged me to just keep climbing and not fall. I told her she would be okay and it would be like a top rope fall since I was not that far above my last bolt.

She, again, was pleading with me not to take the fall.

I hesitated, telling myself: she could do this and she was being overdramatic. I began to have this uneasy feeling, but I pushed it back down wanting my daughter to get over her fear. I made the decision and decided to take the fall.

The next thing I know I am falling and hitting the ground. We were in a granite quarry with blocky boulders all around, though I was fortunate enough to land on one of the only flat pieces of real estate in the area.

When I hit the ground I immediately knew something was wrong; I was in more pain that I had ever felt before and could not move without intense discomfort. The first thing I thought was,

Oh shit, what did I just do to my daughter? Why did I not listen to her? I should have listened to my gut.

The guilt was overwhelming, yet I held it together for my daughter’s sake.

We were lucky that another group was climbing around the corner who we had chatted with earlier. I had her run around the corner to get help. They called 911 and helped me lay down flat, and at the time, I thought I was having a muscle spasm in my back. The local law enforcement arrived followed by the fire department, rescue crew, and EMTs.

I was placed on a backboard and given some IV pain killers immediately. The sheriff’s deputy called my husband who was working 90 minutes away and explained I had been in an accident. And although I was near my parents’ house, I would not allow anyone to call them because the last thing I wanted was to have them freaking out while the EMTs and rescue squad were figuring out how to haul me out of the quarry. I figured my daughter did not need any more stress at this point.

The entire time I was lying there thinking,

This is the biggest parental fuck up of my career. I have scarred my poor daughter for life.

I was eventually hauled out of the quarry and my daughter and I proceeded in the ambulance to the hospital. When we arrived, the nurses found some candy and water for her. I then had the nurse call my mother. My daughter broke down when she walked into the room. My husband arrived next and she completely lost it. I felt like a piece of shit.

Then I was wheeled to get an x-ray and told I had broken my back. I had been in denial, telling myself and the medical professionals that I was only having muscle spasms. I spent the next several days in the hospital. When my daughter would come to visit she had a hard time making eye contact with me. It was devastating for both of us. I was supposed to protect her from harm and now I was the cause of her intense pain.

After I recovered, it was about a year before she would climb again. I brought her to the gym and started her off on top rope. I constructed a belay set up in my basement for her to practice top rope belaying and had her take the top rope belay class at the gym. After the class and practicing at home, she took the gym belay test and passed. Prior to the accident she had been on the climbing team and had belay experience. Her confidence began to build, she was healing, and thank goodness she forgave me.

She then wanted to learn to sport lead climb and belay. She again took a lead class at the gym and was ready and confident to take the gym sport leading test. We were both nervous. I spent the week before with a friend taking sport lead falls so I would be less nervous with my daughter. I wanted her to know I trusted her and that the accident had been my mistake, not her’s. The day came and we went to the gym to take the test; she climbed first and took her fall. She was flawless in her clipping and technique.

It was then my turn for her to catch me. I climbed up five clips and then above my fifth clip, took a deep breath, closed my eyes and let go. She made the greatest soft catch of my life. I was so proud of her resilience and for her understanding that I was wrong the day of my accident: I had made the mistake and it was not a reflection on her.

Looking back, there are a few things I could have done differently. I could have had her belay me on a GriGri, told her to stand close to the face so that when I fell she would not be pulled into the wall, brought along a backup belayer, listened to her and let her just lower me down. (The last would have been the most obvious and best decision).

Since the accident, I have learned to put my ego behind me, truly listen to my gut, and the people around me. I am fortunate that in the end, all is well.

By the way, my daughter is now 17 and we just returned from a week-long climbing trip at Shelf Road. 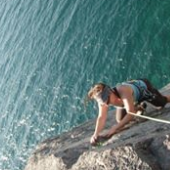 Living in lovely Minnesota with my husband and two teenagers. I started climbing with a trip to Joshua Tree 10 years ago. I had always wanted to learn how to climb so at the age of 34 I booked a trip with a women's adventure travel company and I spent a week in the desert with total strangers learning to climb. I have been climbing ever since and I am always looking forward to my next adventure!