Doubt, Fear, and Mistakes on the North Face of Mount Shuksan Doubt, fear, nerves, and lethargy, the four horsemen of my apocalypse, crept along my spine, wrapping their hands around my neck whispering into my ear the siren song of retreat.

I wanted to scream, to shout, to throw my head back and growl to banish these thoughts from my head. Looking over my shoulder, the ethereal blue of the crevasse yawning below me. Twenty meters up, a crumbling wall of greenschist with no protection between me and the massive frozen sea below.

Images floated into my mind; a hold crumbling beneath my foot, gravity carelessly pitching me into the yawn, first breaking my ankle on the ledge below, then with nothing to hold me, falling into the crevasse. Where with each breath I would slowly, inch by inch, slide deeper and deeper into the depths, my body heat melting a perfect silhouette sarcophagus in the ancient ice. My mind snapped back to reality. I carefully lead through the final small band of rock to where the pitch eased off. Crux pitch from below, we took the snow-dusted ramp on the right.

Ding, ding, ding — the rising pitch of the piton, like notes on a keyboard, calming my nerves. The 35-meter pitch of mixed climbing fell away below me.

“You’re on belay!” I shout down. There is no point in telling him to take me off, I know that he is already climbing. The single, half, 30-meter rope we are using pulls smoothly as he moves slowly. I can hear his tools and crampons scratching through the soft snow till they catch on something substantial.

As he climbs, I let my eyes wander. Save Mt. Baker to our South West, we are the tallest thing around. Peaks, mountains, ridges, valleys, rivers, forests, all fall away into an endless blur of green until it hits the Puget Sound.

The position of the sun catches my eye. I glance down to check my watch; it’s almost 4. Shit. We still have to gain 2,000 feet, traverse around the summit pyramid, and descend a complex glacier. As Rene pops over the last roll onto easier slopes, I begin to break down the anchor. We exchanged some pleasantries then I was off climbing again. Rene topping out the mixed pitch.

Step, step, swing, swing, step, step, swing, swing — I fell into a rhythm, a dance, with the mountain, with Rene on the other end of the rope. We moved in tandem up the easier slopes, the firm glacier ice crunched pleasantly as we moved, efficiently churning upwards. We trended up and right, following the apparent snow ramp.

The driving beat and fiery lyrics of Rise Against pulsating low in my brain, taunting, teasing, driving me.

The snow ramp we were on was getting steeper, I started to get an uneasy feeling that we were not in the right gulley, but I pressed on. I lead us up a steep rock slab that was partially buried by the recent snow, nothing felt secure, and there was no place to place pro. I topped out the ridge to be greeted by a cliff band. I belayed Rene up to me and apologized. I knew I messed up, I took us up the wrong gulley, and forged ahead when the climbing was desperate, insecure, and dangerous. We backed up the anchor and started down, after two raps we were back to where we could down-climb. We had to descend almost two thousand feet to where we could go around the bottom of an imposing rib of rock. Descending down an easy snowfield as the sky grew dark.

The sun drooped low in the sky, dragging long dark shadows against the white snow. Again I set a fast pace. Descending quickly over easy terrain. Step by step we dropped, just as degree by degree the sun crept closer to the horizon.

As the sun got closer, it turned a fiery red; our world blossomed into a surrealist painting of blues, reds, and blacks. The beauty was lost on me. The redder and redder the sun got, the faster and faster we went, it became our own perverse stop light. We traversed over wind loaded slopes, where our steps kicked off roller balls that grew and gathered speed till they launched off the cliff sending them a thousand feet to the glacier below.

I fucked up. We shouldn’t have been here.

The last few rays of light vanished over the horizon. The low static chatter of stress in the back of my mind amplified. Where are we going? What if the next gully cliffs out as well? Would it be possible for us to rap down the crux pitch if we needed to? Could we navigate the bergschrund if we did get up the exit gully? The chatter grew louder and louder. I felt the fear sinking its icy talons deep. I was scared. I was out of control.

A clear, demanding, voice broke through the chatter; “this is how people die, slow down.” I slowed, I stopped, I breathed. My mind cleared.

I started climbing again, slowly, pacing, we need to get off this mountain, and the easiest way is up and over. We climbed with our one headlamp in the dwindling twilight. Features began to blend, the topography under our feet merged to a flat, unbroken plain. I came to a decision point, the gully to the left or the gully to the right. I chose right. I chose wrong. After turning a corner, it reared back to vertical. I climbed back to meet Rene at our last stance.

“What would you think about staying here until morning, when we can see?”

I mentally took stalk of our situation; we still had a thousand feet of climbing, plus a long and complicated descent, we carried no tent, no sleeping bags, no overnight gear, only a thin insulating jacket each, just one headlamp, one stove, and about 500 calories to split. I was tired and weak; I wanted to stop, I wanted to sleep, I made excuses for why we should stay, I gave up, I gave in, we stopped.

We crawled inside the moat between the glacier and the cliff band and got to work chopping to make it bigger. We laid down in our body shaped hole, just barely large enough for us to both fit if we cuddled front to back. I closed my eyes and sleep came quickly. I slept the dreamless sleep of the dead, nothing but darkness.

My uncontrollable, full body shivering brought me back. My sweat had frozen, and I was beginning to freeze, so I stood, moved, and tried to rewarm my body. I was already wearing all of my layers. I was cold; full body shivers wracked my body from head to toe. The night passed in a daze. I moved to stay warm or lay down to rest. The two passed one to the other, back and forth in an endless cycle. The line between sleeping and waking nihilated to a state of nonexistence. I simply existed.

Rene’s bright, alert voice brought me back; “I have good news.” My eyes opened, and I was greeted by the first light of pre-dawn. As I packed up camp, Rene sparked the stove and got us a liter of lukewarm water, which we used to wash down the half handful of nuts we had for breakfast.

The climbing was easy, but we were slow. We were wasted. We were tired, hungry, sore, and cold, but it felt good to be moving again. By eleven we were traversing around the flat glacier below the rocky summit pyramid. Traversing below the summit pyramid.

We disregarded the route to the summit without a word; there is no glory here, no summit selfies, no posturing, no relief, merely droning down.

We descended, down, dropping step by step, not stopping, not thinking, just descending. We planned to drop down the White Salmon glacier … it was broken and chaotic, and we were too wasted to navigate it. So we opted to descend the trade route, with its well-beaten path and established rappel anchors. It was going to be more comfortable, but it took us to the wrong side of the mountain, we knew that it was going to be another long day.

Eleven hours after we started that morning, we made it off the mountain, rested, and drank for the first time since the morning. We still had lots of miles left to go to get to the trailhead, then several more to get back to the car. I was done caring, my mind blanked, I just focused on putting one foot in front of the other. The sun set a second time, so I hiked in the dark. Rene couldn’t keep up, so I hiked alone. I was cold and hungry, so I shivered as I hiked. My feet hurt, and my legs burned, so I hiked in pain.

Finally, after 40 hours I made it back to the car. 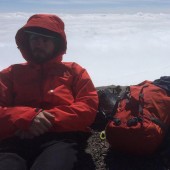 I climb, I ski, I take photos. I was born in the Climbing Mecca of Boulder, Colorado, but am now based out of Seattle when I am not dwelling in my Subaru. Having rot my brain on the likes of Mark Twight, Johnny Truant, Nietzsche, and Shakespeare, I believe Existential Nihilism is an acceptable world view.