What Nobody is Saying About the Dawn Wall This a republished article by Chris Kalman of Fringe’s Folley. In no way do the thoughts or ideas expressed in this article reflect the opinions of Moja Gear.

So, the Dawn Wall project is obviously the coolest, most groundbreaking, awe-inspiring, mind-blowing thing in the climbing world right now.

Tommy Caldwell is a freaking animal, and as hard a worker as you can find in the pantheon of professional climbers.  And as far as I can tell, Kevin Jorgeson went straight from top-notch boulderer to world-class runout vertical granite tickytackytechy big wall free climber – as impressive a transformation as I can imagine.  What the guys are accomplishing up on the Captain right now is literally out of this world.  I can’t wait to see them send, to watch the video footage, to click on the various newsreels that display their step by step progress each day on the interweb.

And yet, no matter how hard I try to shut my overly-critical brain of its latent cynicism, I can’t help but feel like something about this whole thing is a little amiss.  Now, this is not to take anything away from Tommy and Kevin – not in the least.  I won’t be that armchair mountaineer.  Like I said, I am so blown away by their feats of strength, courage, and perseverance that the last thing I want to do is criticize.

Related: WTF is a Dawn Wall?! A Laymen’s Guide to What the Hell Happens Up There

But I find myself wondering, what does the Dawn Wall project, and the associated fanfare, say about climbing today?

In many ways, the whole thing feels like a grand contrivance.  I know, ‘but isn’t climbing itself the ultimate contrivance’?  Yes, of course.  But some kinds more than others.  Now, I think that freeing all the pitches is certainly worthwhile (and this has been done, as far as I understand).  And climbing the route in a push, while freeing as much of it as possible – that’s certainly worthwhile.  Even spending a few days on it, yes, and pulling the rope when you fall, high-pointing, whatever it takes; going at the thing wall style and trying to free it – indubitably awesome.

But spending two to three weeks on the route, surrounded by camera crews, fixed lines and other media accoutrements; getting goodies brought up to you by friends; ticking holds; rehearsing sequences on toprope; downclimbing huge sections to circumnavigate an impasse, and in doing so climbing the majority of a pitch on toprope… Doesn’t something about all that seem a little out of place on the middle of El Capitan?

Call me old-fashioned, and obviously not cutting edge, but even on El Cap, shouldn’t the whole point of the climb be the adventure surrounding it?  What I can’t help but shake from my head the more I think about this Dawn Wall extravaganza and the media zoo that follows it is Reinhold Messner’s famous article, The Murder of the Impossible.  In this piece, Messner campaigns fervently against the direttisima, and bolting – largely because it removes the sense of uncertainty from the climb itself.  Now, obviously what Tommy and Kevin are doing is by no means equitable to what Harding did on the last pitch of the Nose, or what Maestri did on Cerro Torre.  What these guys are doing is bold, often runout, difficult to protect, state of the art free climbing.

But yet, in their own way, aren’t Tommy and Kevin doing every humanly imaginable thing to remove as much doubt as possible from the success of their ascent?  Certainly, there is the adventure of doing these insanely hard pitches knowing that you could fall at any moment – there’s the adventure of putting in 5 years of hard work not knowing if the thing will ever go in the first place – there is that adventure.  But on this climb itself – on this ground-up push – where is the sense of adventure that the climb itself brings?

Between 4-course meals, pre-planned moisturizer applications in the middle of the night, meticulously filed finger and shoe tips, twittering-face-booking-instagraming and otherwise social mediafying – doesn’t what they are doing sound a lot more like cragging than wall climbing?

I simply get the impression that if the guys just spend long enough on the wall – take enough rest days up there without coming down – the thing is bound to happen one way or another.  And if so, why not just come down each night, and jug up the next day, or the next week, or just call it good already because technically they’ve already freed all the crux pitches.  It’s not exactly as if they are doing it all in a row.  There is (I believe – and I might be wrong on this) a lot of chillaxing going on up there.  Which is great – that’s part of wall climbing in the valley anyway.  But where, I repeat, is the adventure?

The aura that surrounds Tommy and Kevin’s push simply feels a lot more like a sport-climbing project, than a big wall adventure.  Closer to Sharma pushing and pushing and finally sending Realization than to a bunch of Belgians romping their way up mossy big wall offwidths in the middle of the Arctic with seagulls puking in their faces.  What makes me nervous is watching the pursuit of sheer athleticism push out from bouldering, gym, and sport climbing into trad climbing, wall climbing, even into the alpine (with athletes like Tommy, Alex Honnold, and Ueli Steck doing insane linkups and freesolos in Patagonia and the Himalaya).

Sport pushes outwards, but adventure does not push back.  It simply moves along to more adventure.   If the sport aspect of climbing continues to expand unchecked, do we not run the risk of the adventure aspect not only becoming marginalized, disenfranchised, and relegated to more and more remote (i.e., expensive) ranges – but worse yet, forgotten altogether?

I think it’d be absurd to say that Tommy and Kevin aren’t experiencing some incredibly adventurous feeling moments these days.  Or that Ueli and Alex don’t confront inner demons most of us would rather not even consider on their major solos.  What I am more concerned about than them, is us. The obsession that the climbing media and the rest of us ordinary climbers (aka, mere mortals) have with documenting the constant progress of the physical aspect of climbing, rather than exploring the depth and intricacy of the emotional landscapes that drive us to and away from the mountains time and again, leaves me feeling wary and unsettled.

Climbing is so outstanding because all of us – no matter what level we climb at – can have incredibly emotional experiences through climbing (whether scared shitless or lost in ecstasy).  Climbing literature, photography, and other forms of art are so compelling because they tell us stories all of us can learn from, and relate to.  If climbing were more like basketball, football, or any other ball sport out there, most of us wouldn’t have started “playing” it in the first place.

I would argue that the adventure aspect of climbing is the central aspect of it – not the athletic aspect.  Furthermore, by championing athleticism over adventure, I believe we lay the foundation for turning climbing into something it most certainly is not: a sport.

And I guess that’s what this whole rant hinges on.  I don’t believe climbing is a sport.  Climbing is not a game people play, with winners and losers, and bests and worsts.  Climbing is an adventure, a journey, and an expedition – both inwards and outwards.  It is a pursuit, an exploration, and a way of life.  It is a prayer, a practice, and an art.  Each climber should climb in his or her own way; climbing is about seeking out and actually feeling ultimate freedom, after all – not following a bunch of arbitrary rules some other guy set down before you.

I am not arguing for some sort of rigid moral code to go along with trad climbing, big wall climbing, or any kind of climbing – for that matter.  What I am arguing for is a bit of circumspection from all of us about the direction climbing is heading in.

Now, if you’re a trad climber or an alpinist, you likely already raise a skeptical eyebrow or two when you think about bouldering or sport climbing.  But aren’t trad and alpine climbing following suit, slowly but surely?  As climbing itself becomes more and more mainstream, as climbing’s top athletes become more and more like celebrities, don’t we begin losing sight of what makes climbing so wonderful in the first place?  I don’t have the answer; but I think, at the least, it’s worth asking the question.

Postscript: This article is meant to encourage debate, and thought.  It is not meant, in any way, to criticize the Dawn Wall project, or anyone involved in it.  Those guys are off the charts, in my opinion, and I got my fingers crossed that they send.  Good luck Tommy and Kevin…  If you have thoughts on the subject, I’d love to hear them.  Please share!

The original article can be found here. 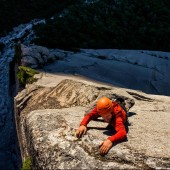