Notes from a First-Time Ice Climber My crampons do not fit, and they have somehow turned into 4-inch platform clogs of packed snow. Their points are dull. My boots are too small. My toenails are bruised. My harness carries only a single ice clipper, and my gloves are hopelessly wet.

My partner turns to me and says,

Good job. Now hand over one of your tools and try it again.

This is my very first time climbing on ice. I’ve just completed a couple breathless toprope laps of a small frozen waterfall in Grafton Notch, Maine. The ice is mercifully moderate—only WI2 or 3—but to me it feels exciting enough by far.

Luckily, conditions are perfect: we’re out on a beautiful Friday with plenty of sun, moderate temps, no crowds, and solid ice. My partner is an experienced climber and alpinist, but I’m bold enough to give him a blank look when he asks for one of my tools. Five minutes later, I’m lowering down, shaking a little but feeling triumphant after a successful ascent with just one tool.

Great. Now give me your other one,

“It will get you used to your crampons.”

Here are my takeaways from day one on a new medium:

You know all those online threads where bearded men debate swing weights and the merits of mono- vs. dual-point? It turns out all the gear stuff really matters. This turns out to be true in a few ways: everything has to fit. I’ve climbed in rock shoes that were overly tight, and it’s certainly not pleasant, but it’s nothing compared to a blackened toenail after a day of bashing my feet into what felt like cement.

If you’re investing in equipment, make sure your boots fit your feet and your crampons fit your boots. Ice climbing has enough factors to up the suffering—cold, fear, a partner who is hell bent on imparting good habits—without you destroying your extremities. It helps to keep them warm, too. Invest in a second pair of gloves, a pair of boots warm enough for the area, and hand warmers if you run cold (I do).

Not having the right gear is an easy mistake; even Alex Honnold notoriously brought the wrong crampons for Patagonia’s epic Fitz Roy Traverse … Or rather, in the case of my crampons, it should be. This means that your gear will occasionally get holes in it (I lasted approximately three minutes before punching a hole in my gaiters), and also that you need to get well-acquainted with how it all works. I was lucky enough to be borrowing equipment, so I could feel out the swings of a couple different tools.

Borrowing equipment is probably the best way to try ice climbing, if you can find someone generous enough. If not, you’re looking at a serious investment: a few hundred dollars (minimum) for boots, a few hundred more for tools, and at least $100 for crampons—and that’s not counting screws or V-thread tools or the other medieval devices that ice climbers adore.

It’s possible to accrue these things on the cheap, but you’ll most likely be happier if you get it right first time around because replacing items is an expensive proposition.

You know that elementary school science experiment where you leave one hand in cold water, the other in hot water, and then put them both in lukewarm water?

Ice climbing is like doing that experiment all day with different parts of your body. While I was climbing, my hands went cold but my core was sweating. After I came down and put on some comfy belay mittens, my hands heated right up while I started shivering.

The lesson: layers matter. Alpine layering systems have seen almost as much forum coverage as debates over grades, and I won’t try to go into detail here. But do read a few blogs or some Mark Twight, because being able to regulate temperatures for different activities is one key to keeping the suffering-o-meter at a reasonable level.

5. Footwork is still the key This is one of those areas where you would expect the crossover from rock climbing to be pretty reasonable because most rock climbers (should) spend a lot of time thinking about their footwork. Unfortunately for me and hopeful rock-warriors everywhere, standing on ice is nothing at all like standing on rock.

Despite my partner’s repeated admonitions, it took me most of the morning to realize that crampons are more secure if you drop your heel and allow all four points to contact the ice. Oddly enough, it feels much more like smearing than edging. It took me another few hours to start trusting my feet at all, which meant that instead, I was death-gripping my borrowed tools.

This is a recipe for fearful climbing, cold fingers, and a vicious pump. The real surprise is that once you do trust your crampons, they stick well. I remember the first time I smeared in rock shoes, expecting to slide right off, but stuck—it’s a similar experience.

If you get weight over your feet and just stand on them, it’s actually pretty shocking what your crampons will support. Or it was to me, anyway. Still make sure they’re sharp though.

When I started rock climbing, I found that much of my time went towards learning the vocabulary of the movement. We all learn what it feels like to rotate your hips, what makes a shoe stick on a small edge, when to climb quickly, and when it pays to take your time.

If rock climbing is like English, learning to ice climb is a little bit like learning German. There are definitely some cognates, and a lot of your skills will end up being useful. Much of the time, though, you’ll be wondering what the hell is going on and how geschwindigkeitsüberschreitung could possibly be a normal word.

I found myself constantly feeling just a little disoriented—as though my body almost knew how to do this. It turns out that rhythm is extremely important in ice climbing too, but it’s a different beast, metronomic and efficient. There are new movements and new habits to build, and just like with rock climbing, it takes mileage to internalize them. Which brings us to …

And I don’t mean just in the terms of movement. I had read my fair share of trip reports and instructional articles, but I still needed someone to show me how to put your weight behind an ice screw to get the threads started.

If you want to do more than toprope on basic anchors, an entire world of learning awaits, involving arcane knowledge about ice types, screw angles, V-thread tools, screamers, and something called a “snarg.”

Just like the principles of trad climbing, these skills are generally not difficult to understand, but they take practice, and the price of getting something wrong can be extremely high. I was glad to be tagging along with an experienced climber, which might be the best possible way to learn.

What’s odd is that despite the cold and the plethora of sharp objects, ice climbing is still stubbornly fun. Like many rock climbers, I remember my moment of no return—the exact moment when I realized that my shoes would stick, that I could grow stronger mentally and physically, and that I was capable of going places I had never imagined. I became entirely addicted to climbing.

Ice climbing is an extension of the same journey. The terrain is fantastical and alien, the tools are specialized, and the barrier to entry is a little higher, but ice climbing grants the same addictive rush, allowing the stresses of everyday life to exfoliate away.

What’s more, ice climbing is a gateway drug to alpinism. If your local cliff is the first step toward El Cap, then the ice crag will get you dreaming of Cerro Torre. Big winter climbs are obviously years away for a beginner like me, but it’s inspiring to suddenly unlock new vistas of the climbing world.

So along with all the other icy warnings about crampons, screaming barfies, and fall potential, here’s one more: 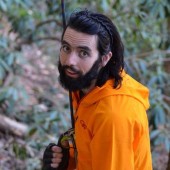 Willis Kuelthau is a Maine-based climber, writer, and editor. He spends his days drinking too much tea and his evenings kicking it with his cat, Cleo.