Of Ghosts and Gracks: On Becoming a Yosemite Climber A friend whipped off a last-minute invite to Yosemite as I wound down the nerve-wracked last days of my nearly decade-long job, and it was all I could do to keep myself from jumping through the computer to smother her with gratitude. I’ve found magic in many places over the years, but the deep gash of the Valley has consistently poured out just enough during the times when I’ve needed it most.

Thus, my first willfully unemployed Monday began with a long drive north, three of us listening to climbing podcasts and Californicating about all things epic, gnarly, and stoke-worthy promised in the days ahead. None of us had climbed in Yosemite before and I suppose we all played a silent, continuous loop of our own home movie version of what it would look and feel like to become Yosemite Climbers.

The history! The glory! The ghosts of rockhounds past!

The word “dirtbag” was tossed around more than I care to admit—but then again, there is no shame in wanton enthusiasm, is there?

We landed at the campsite and disentangled from piles of gear and food, tossing out chairs and backpacks with abandon, but carefully handling racks and ropes as if they were the Queen’s jewels. We are in a sacred place and mustn’t disturb the force. In short time, a shot was pressed into my hand and I threw it back with a silent prayer to whoever it is that manages the universal good vibes to keep us all safe and happy, not that I had any misgivings about the latter.

After a relatively boozy late afternoon saunter, we converged with the rest of our merry band of granite-stroking miscreants and hammered out a plan for the next day. The half-hour before dawn arrived much too early, but once I sat up and de-smeared my eyes, they lit upon the climbing shoes crammed into a tent corner and I surged with joy, nervousness, and wild energy at the realization that I was about to test them on some of the most storied granite in the world.

This was immediately tempered by the realizations that I was the only one in the group without a partner, that I had never really done any multi-pitch routes, that I was surely a terrible climber unworthy of Valley majesty, and that I would be relegated to sloshing around the Merced with the washed and rubberless masses while everyone else had all of the fun.

I silently moped around the fringes of breakfast, then trundled my things over to the group. Guidebooks were consulted and routes discussed as the yard sale commenced, a small home loan’s worth of stuff laid methodically across tarps. I kept tabs on my drool, but nearly choked on it when someone turned to me and said,

Me? Here? In This Holy Amphitheatre of Ascension? And then:

I couldn’t decide if I was excited or terrified when I was tacked onto a twosome for a run up The Grack, a 3-pitch classic along the Glacier Point Apron. I decided on a mildly uneasy blend of apprehensive joy, which swung to either end of the spectrum at 2-minute intervals as I baked in the sun below the line. The moves were simple and straightforward, but in those first few minutes, I felt a strange pressure to perform—to prove to my friends, and mostly to myself, that I was worthy of running my barely calloused hands along these historic seams and bulges.

Despite the walkup moves, I went numb just before the anchor. Paralyzed by a strange sort of physical amnesia, my heart raced not from exertion, but from the panic of my own expectations, and I panted like a summertime pup.

My doubts blossomed into reality: I didn’t belong here.

I looked up to my friends, then down to the Valley floor, whispering a silent summons to its spirits. Then nearly as soon as it began, the spell snapped and my fingers found a crack, slid inside, and with a slight curl, locked my head on straight. I let a stupid smile rip as I finished the pitch and perched on half a cheek, flaking the rope and marveling at my position up above the river and trees and people.

I am no Lynn Hill, but I made it here, and here is fucking fantastic. The next two pitches were a dream, all toes and fingers and freedom. I fought the urge to cry after clipping myself in at the end, but a few sneaky drips found their way past my sunglasses. The joy was so real, so raw. I thanked everyone within eyesight at the anchor, during the rappels, and at the bottom, then continued to do so for the next few hours until quelled by a stolen shower, a few beers, and the soft glow of accomplishment.

We climbed again the next day, but while my hands and feet found their place, my head and heart were still wedged into The Grack. In fact, a small bit of both remains there today. When I visit Yosemite now, whether in mind or body, I no longer feel that its spirit is beyond me or larger-than-life—I feel that instead, it gives life, recycling the ghosts of granite-goers past into a bit of soul food for those present. For me. 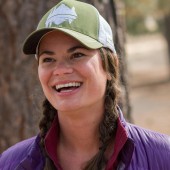