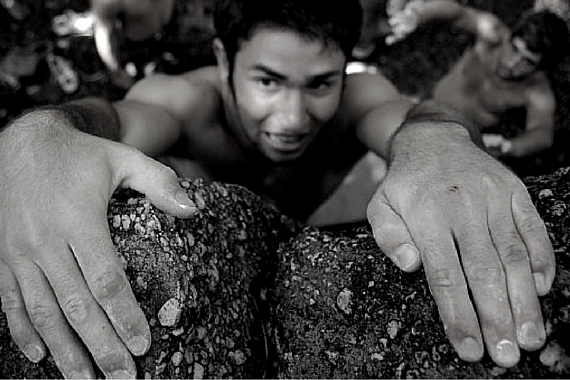 This guide serves as an introduction to the main rock climbing grade systems used in the United States, including the V-Scale for bouldering and the Yosemite Decimal System for roped climbing. It also provides an overview of the National Climbing Classification System (NCCS) and aid climbing grading systems. See our international Climbing Grade Comparison Chart showing how grades in the US convert to those abroad. (Photo: Maria Ly) 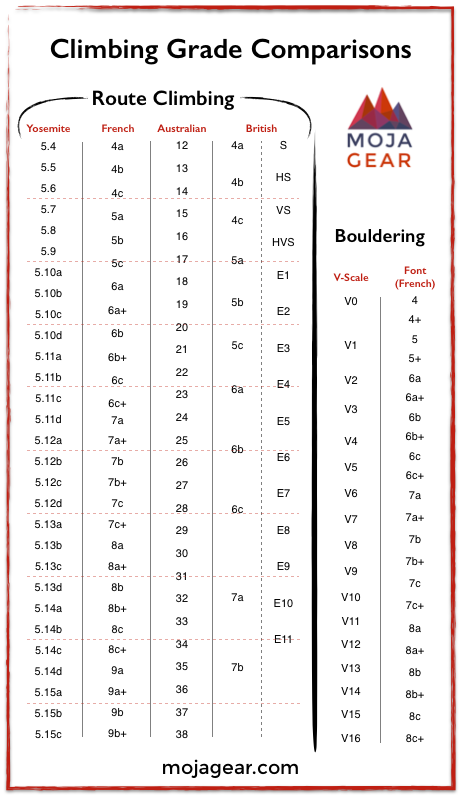 Established by John Vermin Sherman in the bouldering mecca of Hueco Tanks, the V-Scale ranges in difficulty from V0 (easiest) to V16.

America’s grading system for roped climbs is the Yosemite Decimal System, which is divided into five classes. Roughly outlined, these are as follows:

For the purposes of modern rock climbing, all grades occur within Class 5 and range in difficulty from 5.0-5.15d. When established by the Sierra Club in the 1930s, however, Class 5 grades were intended to range from only 5.0-5.9. Anything above 5.9 was previously regarded as impossible.

In 2018, Adam Ondra successfully ascended the first route with a rock climbing grade of 5.15d. Since Adam Ondra is the only person to have ever climbed a route of this difficulty we simply have to trust him that it really is that hard.

Watch Adam Ondra’s send of Silence, the only route ever climbed with a grade of 5.15d.

The evolution of the Yosemite Decimal System of grades

Unable to contain breakthroughs of the last half-century, rock climbing grades have steadily been pushed upward. Additionally, letters a, b, c, and d have been implemented above the 5.9 grade to further distinguish individual grade increments. An a is indicative of the easier side of the numbered grading level, followed by b, c, and d as the hardest. Note that the difference between 5.11a and 5.11b is theoretically the same difference in difficulty between 5.7 and 5.8.

Although grades are implemented as a system for consistency, they can vary greatly between indoors, outdoors, and across different climbing destinations. Locations such as Joshua Tree are notoriously hard or “stiff” in the gradings, whereas modern sport climbing crags may be softer.

Related: What’s in a Grade? How to Approach Climbing Difficulty

In addition to the number and letter grade above, outdoor roped climbs may also include a protection rating. This rating is a combination of the danger of the climb, along with the degree of spacing between protection/bolts (how “run-out” the climb is). These ratings correlate with the movies:

A look at The Bachar Yerian 5.11c R/X one of the most famous run-out and “no fall” climbs:

Not to be confused with the class system outlined under the Yosemite Decimal System, the NCCS climbing grade scale measures what climbers often refer to as the “commitment Grade.” This system essentially categorizes the time investment an average climbing team must commit in order to successfully complete a route. These are especially useful in places like Yosemite, where routes can vary from quick multi-pitch outings to multi-day big wall climbs.

Aid climbing, in contrast to free climbing, involves pulling or standing on fixed or placed protection to ascend a section of rock. This style of climbing—most often used during big wall ascents—has several scales for grading, including the Original Grading System, the Clean Climbing Rating System, and the New Wave Rating System. For each, the system measures the quality/dependability of gear placements and the level of danger in the event of a fall. Many consider aid climbing grades to be especially arbitrary, as skills, equipment, height, and other elements can greatly affect the difficulty of a route.

When the letter “A” precedes a number grade, this suggests that the route requires or features placements that require the use of a hammer, such as copperheads or pitons. The letter “C,” by contrast, means that the route can be climbed clean; instead of relying on passively placed protection, such as cams, nuts, or hooks. If you liked this article on rock climbing grades, we think you’ll also enjoy: