Sabrina Chapman, a Canadian sport climber with African & Indian heritage, is on a mission to send her first 5.14a – the threshold for elite climbing. But the “Titan Project” is also much more than that. It’s a story of one woman’s journey of self-acceptance, healing, and resilience. This is a majority crowdfunded film about a black woman climber.

This short film premiered on August 16th. The film follows climber Sabrina Chapman through her journey of climbing Titan, a 5.14a route at Lions Head in Ontario. It is considered the hardest routes in Canada.

This project with Sabrina and Melanin Base Camp is one step in their vision of building a climbing community with black or brown climbers.

Check out TITAN PROJECT from Melanin Base Camp 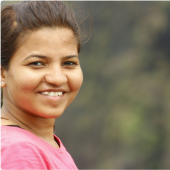 Nutan was working as a Software Engineer when she discovered her love for outdoors. After completing a Mountaineering course, she successfully switched from Engineering to Outdoor field by working as a Content Writer for popular Indian Hiking Company, Trek the Himalayas. She now writes for big Hiking companies along with UKClimbing, Gearjunkie and other climbing websites. She manages Social Media for MojaGear. She is now either hiking or climbing all the time, each day living her outdoor dream.