Disclaimer: This is sponsored content. But at Moja Gear, we only work with brands and products that we believe provide value to those in the climbing community … Brands we think are rad.

It’s time to get rid of the idea that a single number—shoe size—can capture shoe fit. While designing shoes for SFT Climbing, I’ve realized that mass-produced shoes force us into an outdated compromise between performance and comfort.

Two friends and I started SFT Climbing to make a pair of shoes that resolved this compromise; our original solution was a pair of shoes that could adjust between downturned and flat. Climbers wearing these shoes would be able to walk comfortably, warm up or complete approach pitches, and then crush their hardest projects, all in a single pair of shoes—less weight and less pain!

During the first months, we built a 3D computer model of our last (the form that the shoe is built on). Because we were starting from a blank slate and weren’t sure what would be most critical to the fit of these shoes, the last geometry was driven by multiple foot dimensions that I measured from SFT testers. Back then, that was mostly the two founders, Dan and I, who differed most in size. Since we had two testers—a tall guy and a short girl—we naively thought that we would just be able to grade the “womens” model and the “mens” model into different sizes based on length, like standard shoes.

Dan and I were at the gym for testing one day, and we started talking to some staff members there, explaining what was going on with our weird-looking shoes. Two of them wore size 42 EU, the same size as Dan, so all three guys tried to test the same prototype shoes. To my surprise, the shoes that fit Dan perfectly were extremely baggy on the two staff members. Even worse, the shoes didn’t fit each climber in different ways!

One climber had extra room on the sides of his feet and under his arch, and the other had a large gap above his foot even with the laces cinched as far as possible. Three testers is a small sample, but there didn’t seem to be any consistency here—

how could I have gotten the last geometry so completely wrong?

At this low point, a good friend asked to buy the first pair of SFT shoes. To understand the fit issue from Dan’s shoes and to prepare for this first delivery of shoes, I researched foot biomechanics, foot metrics studies, and shoe grading and sizing. The foot metrics I was looking at showed that not just width and length of feet vary somewhat independently, but foot heights do too. This was the reason that three climbers with the same “size” feet couldn’t comfortably wear the same prototypes. Foot shapes can’t be captured with just one size.

Because I built our last model in a parametric CAD program, it was already structured to take a relatively large set of foot dimensions. With this foundation, I decided to ignore conventional shoe size and simply build shoes to our first customer’s foot dimensions using the existing CAD model.

Five prototypes later, SFT’s first customer was happy with his shoes’ fit and design. We had learned a lot through collaborating with him, but the most important feedback came after he’d been climbing in his shoes for about a month:

I rarely feel the need to adjust these shoes to climb different types of problems.

Wow. Again, had SFT been on the wrong track since we started? I too had been climbing in some adjustable prototypes, and … also never adjusted them. They performed well though—almost disappeared when I put them on to climb, working subtly with my feet on all kinds of holds. Dan also loved his non-adjusting prototypes.

All our shoes had one thing in common; they were built to each of our foot dimensions. And in our customer’s case and mine, custom fit seemed to have a far greater impact on our shoes’ comfort and performance than adjustability.

This moment, and the one when two other climbers tried to help test Dan’s custom-fit prototype, were turning points for SFT. It seemed like the true answer to our early dream of comfortable, high-performance shoes was customization. Now we had to find a way to bring that solution to many more climbers. Driving down the cost of custom shoes

At the moment that we realized that we had to make custom shoes, SFT had a basic CAD last model and a rough system for taking foot dimensions. Because of our quick-turn prototyping schedule, we had worked out a way to build inexpensive laser-cut lasts. The same laser-cutting system could be applied very effectively to fabricating shoe patterns, as well. With each part of the shoemaking process, as long as we avoided traditional tooling that would lock us into a sizing system, these custom shoes could be reasonably priced. Laser-cutting suede patterns allows us to accommodate a huge range of foot shapes, as well as special design requests.

By digitally fabricating shoe components, SFT can make better-fitting and higher-performance shoes that are: We’ve put almost 3 years of work into improving our CAD models and our manufacturing system to make sure that everyone who climbs in SFT custom shoes is getting the full benefits of proper fit: no compromise between performance and comfort.

And just like with SFT’s first customer, we learn from every climber’s feedback to continually improve our shoes. To each #SFTClimber, thanks for joining us in creating high-performance, yet comfortable climbing shoes! 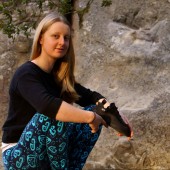 MIT-forged engineer and climber: bringing these passions together as the founder of SFT Climbing.