Stacking Paper: How Climbing Strength and Climbing Skills Build One Day at at Time My friend Matt is a clean-cut, optimistic, friendly, and charismatic guy. He’s also a good motivator. This makes him a great climbing partner.

I will state upfront, Matt is a much stronger climber than I am. Watching him run multiple laps on routes in the mid 5.12s is inspiring and motivating. He also seems to have this sixth sense about when his partners need a push or a word of encouragement during their climbs. One of my favorite Matt sayings is

we’re stacking paper one sheet at a time.

Endurance workouts in climbing aren’t the most fun. Lap after lap on relatively easy grades or traversing back and forth on the wall, building muscular stamina doesn’t compare to the euphoria of sending a project or the concrete progress of working a problem.

It’s hard to maintain that commitment to training all areas of climbing fitness. It’s hard to see results from one day to the next. But Matt nails it with his paper analogy. One sheet more than before, the stack doesn’t seem any different. But drop a ream of 500 sheets on the table, and it has some heft to it.

My journey in climbing

My first visit to Boulder was a transformative experience. It was a short trip, full of highs and lows, but I saw enough of the town to know it was the next step for me.

My Airbnb was as Boulder as it gets. The hosts weren’t home, they were backpacking. Guests came and went all weekend. On Sunday afternoon, a pair of Canadian climbers arrived. They live across the country from each other but meet up every year to spend a week climbing somewhere in North America. As they sat on the back porch organizing their gear, I sat in awe. Having climbed only a handful of times in a gym, I couldn’t imagine what all this shiny, clanking stuff was for, but I knew I wanted to learn … I later moved to Colorado and I threw myself into climbing. I would run laps on the auto-belays until I couldn’t wrap my fingers around the steering wheel on my drive home. I moved gyms and found a great group of climbers to practice with. Over time, I learned to lead, started climbing outside, completed my first multi-pitch, and placed trad gear for the first time. Each step propelled me further in my pursuit to become a climber able to quest off, leaving no trace behind me.

Last summer, I cut open a USPS box to see a set of cams and nuts of my very own. Scuffed, scratched, and a little worn, they weren’t new, but they were mine. As a whole, my journey from gumby newbie to tradster seems fast. I’m still learning a lot about climbing, and there are still many climbs I want to tackle, however, when I think back to individual days climbing, all those milestones I’ve reached, time seems to have stretched out.

I spend more evenings in the gym than not. I rush from the crag to other obligations to ensure I get in some climbing time on the weekend. I wake up in the darkness to climb before work. I give my time freely and willingly, learning and practicing with the sole intention of becoming a better climber. That little USPS box was a symbol of that process and progress.

But behind that not-so-shiny gear was the daily effort of working towards a goal.

For me, the goal was and is to improve my climbing and mountain skills so I can explore new destinations, experience classic routes, and not be limited by my own abilities. I want to be able to climb anything that strikes my imagination, from historic local classics from Layton Kor a la Kor’s Flake (5.7+, Estes Park, CO) to perennial test pieces like Midnight Lightning (V8, Yosemite, CA).

The only way to do that is to continuously improve, working weaknesses, developing strengths, and filling in all the gaps. For me, two big gaps have historically been endurance and my head game. Finding ways to work those two weaknesses has been a key motivator for my climbing.

What I learned in stacking paper

Much like a stack of paper, time has a way of adding up. If you check the stack every day, it never looks any taller.

It isn’t until you remember that at one point, the pile was a single piece of paper you realize the size and scale of your efforts.

It can be discouraging on days it seems you’ve made no progress or feel like you’re sliding backwards. I try to keep in mind that even bad days can be productive, and try to use them to work on things I typically neglect, like flexibility, antagonist muscle training, and pre-hab. It also really helps to have a partner like Matt, reminding you that if you just keep stacking paper, the pile will get taller. 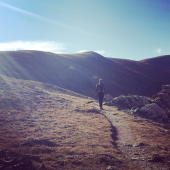 I'm Chris, a wannabe dirtbag who lives to climb and ski, and loves to share incredible stories from our inspiring community. I love documenting my adventures, bettering my mountain skills, and breakfast sandwiches.