After having read My First Summer in the Sierra by John Muir, I was re-introduced to the beauty of Yosemite through the eyes of a man who saw God in everything. Upon my return, everything was more beautiful, more alive, more a part of everything else—yet more distinctly its own individual living character.

Little wildflowers the size of a pinhead were as amazing and monumental as the massive granite monoliths, and each seemed to have its own personality. Some trumpeting, shouting their joy to the sun and the trees towering over them, stretching their little pink petals as straight and happy as they could. Others yawned, as if they were just getting around to waking up by the time the sun set over El Cap, perpetually caught in the blissful first few minutes of waking up when everything is clear and simple. There was one, a purple monkey flower, growing out of a hairline crack in a granite wall over 200 feet from the valley floor. I have no idea how it got there and managed to wedge its roots into the merciless granite as a seedling, but there it was, as proud and hardy as any of the weather-beaten Jeffrey pines at the foot of Half Dome. Another “little person,” as Muir would call them, that never ceases to amaze me is the chipmunk. They are freaking ninjas. I mean, if they were our size they’d probably run at like 30 miles an hour. They pull ninety degree turns on a dime, and they do it on smooth, vertical granite. I’d give my left nut to be able to climb like a chipmunk.

The birdsong choir at sunrise in Little Yosemite is something I don’t think I can put into words. It is an ancient Native American custom to sing the sun a greeting to welcome its warmth and thank it for the new day. I’ve always loved the idea of doing it, but I’m not much of a poet, and though the emotion is there, I can never come up with a song to do a sunrise justice. That morning, the birds did it for me, and all that was left for me to do was greet the morning with a smile. Trees are awesome and majestic and beautiful and a bunch of other cool words.

A few minutes ago every tree was excited, bowing to the roaring storm, waving, swirling, tossing their branches in glorious enthusiasm like worship. But though to the outer ear these trees are now silent, their songs never cease.

I always felt that El Cap was somewhat overrated. Being more of a boulderer at heart, I don’t necessarily feel that a bigger rock is a better rock. Then I hiked to the base. And I touched it and looked up, and the fire was lit. One day …

On my way back to Camp 4 from El Cap, I noticed some trash on the side of the trail, and I thought,

what’s it going to matter if I pick up just one piece of trash?

and began to keep walking. And then I remembered a story [my friend] Andrew had told me about how he’d gone out of his way to pick up some trash on Tenaya Lake. Feeling guilty, I turned around, grabbed the plastic bag, and bunched it into my pocket. I turned back to the trail and a butterfly, from out of nowhere, almost flew into my face. Yeah, you’re welcome. Karma or not, it felt good.

Climbers always complain about the crowds in Yosemite. About how they ruin The Valley, taking it to be more of an amusement park than a place of pilgrimage. And I’m often of the mind that they are right, and that many of the tourists in Yosemite don’t belong there. But on the hike down from Half Dome, I noticed something about the people on the trail: they were all happy.

Regardless of whether they were there to enjoy the beauty of the forest, or whether the only thing they could think about was putting one foot in front of the other, they were all brimming over with accomplishment. The trail to Half Dome allows people’s sense of self-worth and their love of life to flourish. And though nature is precious and fragile, it’s impossible to say that what I saw in those people that day isn’t just as invaluable.

There’s a void in everyone that only the mountains can fill. 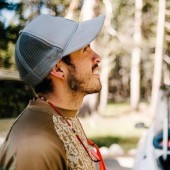