Truck Touring: What to Do When the Dream Isn’t So Dreamy A Baby Beluga glamor shot on the empty roads of Yoho National Park in Canada.

The truck choked and its temperature gauge skyrocketed upwards. We pulled over on Canada’s Interstate 97 and popped the hood. A wave of sickly sweet odor flew out, and shiny neon green liquid poured onto the gravel, already wet with the relentless rain. Our home on wheels, dubbed Baby Beluga, was hemorrhaging coolant.

After a few failed attempts to fix the ruptured coolant hose t-fitting, involving duck tape and super glue, we called a tow truck and got back in the cab to watch the rain fall on the window. We figured that Baby Beluga was rebelling in response to our conversation the previous night. Lying in the dark truck while the rain clinked on the shell, my boyfriend Tyler and I admitted that we were both road weary.

For the last five months, we hadn’t spent more than five consecutive days in one spot and hardly more than an hour apart. The constant moving left us both feeling unsatisfied and the negativity was beginning to seep into our relationship. Something needed to change.

It takes guts to quit a comfortable job and start an adventure. It takes even more guts to admit that your dream isn’t so dreamy and to find a solution.

I asked the squat tow truck driver who lumbered out of the truck wearing rain gear and a neon construction vest.

“Better than you!” he replied, cracking up at his own joke.

“Hmm, you could go there, but I wouldn’t. I’d go to Nechako’s. They’re not open today, but no one is on a Sunday. Looks like you guys might be in Prince George for a while.”

Welcome to Prince George, the largest city in northern British Columbia, where, according to our brief tour guide, “they’ve moved all of the hookers out of downtown recently and my neighbor is a tweaker who just got busted for smuggling drugs (followed by spurts of solo laughter).” Lovely place.

Tip #2: Figure out where you want to be

He dropped us off in front of a car parts store and handed us a hefty bill commensurate to his plumber’s crack. We walked into the auto store and asked one of the employees if they had a part that might work for us. He stepped outside and looked at the truck.

“Sweet Jesus!” (Not exactly the reaction we hoped for.)

A few minutes and computer clicks later he confirmed that he couldn’t do anything for us, but the shops down the street may be able to when they opened at 8 a.m. tomorrow. Tip #3: Let go of things outside of your control

We unloaded our bikes, filled our backpacks with computers, and biked to the library, Tim Horton’s Donut Shop, and Starbucks; following the wifi to the next locale as each one subsequently closed.

At some point earlier that day Tyler had turned and kissed me. “Happy 14-month anniversary,” he said.

By 9:30 p.m. the last minute Couchsurfing requests remained unanswered and the prospect of sleeping in the truck on a dark street in the industrial area of town sounded as unsafe as it does in writing.

Seventy-five dollars later we rolled our bikes into the cheapest motel we could find and cuddled up on the bed to watch Into the Woods. Both of us felt surprisingly pleased.

A few years ago, we may have foregone safety in the face of spending money. Now, perhaps wiser, but certainly more broke, we knew we had made the right decision.

Tip #5: Remember that you are never stuck

By noon the next day, the auto shop had patched up Baby Beluga and we were on our way. This time, though, we had a new goal and a direction.

Tyler wanted a place where he could practice web development and climb. I wanted a place where I could do some yoga and write. Both of us craved a real bed and bathroom, a small outdoorsy town, and a chance to do some volunteering. We changed the plan and pointed Beluga south towards Steamboat Springs, Colorado, where we worked in exchange for lodging through workaway.com and dedicated time to our goals without being on the move. That time reinvigorated us and reminded us how lucky we were to be able to freely determine where and how we spent our time.

On the road, there are so many elements outside of our control. That necessary fluidity is part of the adventure, but also difficult to accept. Tyler and I both learned a lot about who we thought we were and who we actually are on that trip. These lessons helped us find a solution to put our trip back on track, and I hope they help you too. Hanging in the truck outside of Lassen National Park. 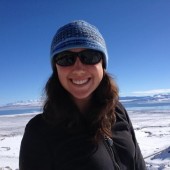 Victoria Ortiz is a freelance journalist and outdoor enthusiast currently savoring every flake of snow in Bozeman, MT. In 2015 she and her partner took the plunge and quit their jobs for a couple years to indulge in hot spring soaked explorations around the globe. Follow their adventures at www.earthtickle.com.