How to Use Alpine Draws: Use and Efficiency for Rock Climbing 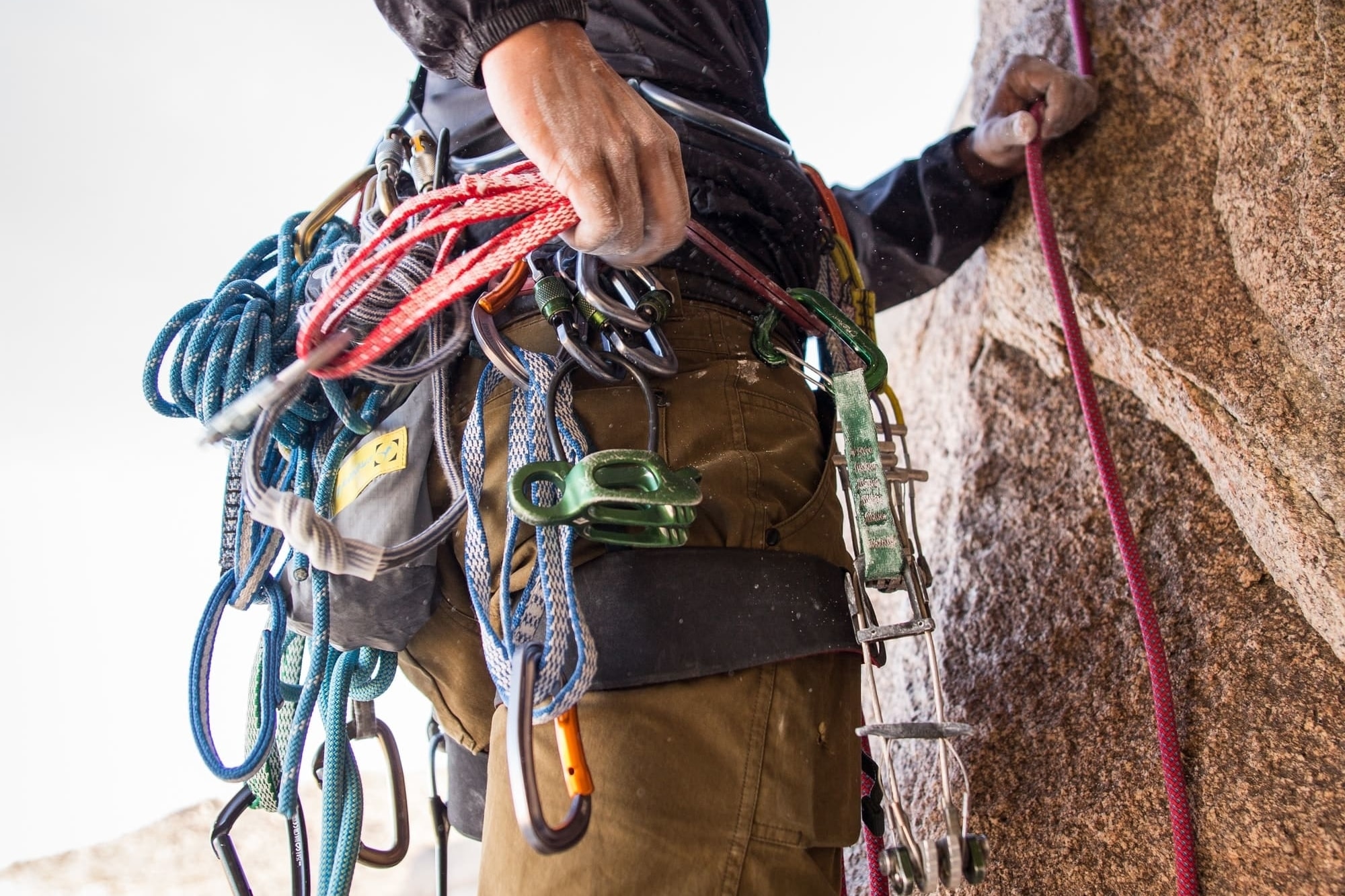 Alpine draws: the very name conjures images of grizzled, bearded men atop a miserable bivy ledge in the Alaska Range or Patagonia. Contrary to the name though, alpine draws, occasionally referred to as “long draws” are an essential part of any rack and understanding how best to use them can go a long way toward increasing your efficiency and upping the fun level on climbs from single-pitch crags to huge alpine routes.

Although some climbers rack in different ways unique to a climb or their preferences, the most common configuration for an alpine draw consists of a single sewn 60cm piece of webbing and a pair of lightweight non-locking carabiners. This configuration allows you to use the draw to clip pieces with the sling tripled, doubled, or fully extended in order to minimize rope drag and lessen the chance of gear walking.

I typically build my alpine draws out of thin (10mm) Dyneema webbing and a pair of lightweight wiregate non-lockers. I use this configuration so my draws take up the least amount of space on my harness and are as light as possible.

On long multi-pitch climbs, the weight adds up as well as the fiddle factor when trying to move efficiently in big terrain. Additionally, because I use my draws on ice and alpine climbs, using Dyneema and wiregates reduces the propensity of my gear to ice up.

That said, when I first started climbing, I built my own alpine draws out of 18mm nylon webbing and a pair of solid gate non-lockers. For my beginner self, these draws were absolutely adequate and saw me through the first two years of my climbing before I decided to upgrade.

When I rack my alpine draws, I typically rack them tripled and clipped to my harness like a quickdraw. To triple the sling, clip both carabiners through the sling, then pass one carabiner through the other, and clip two strands of the sling. You should end up with three strands of webbing through each carabiner. Clip the sling to two carabiners 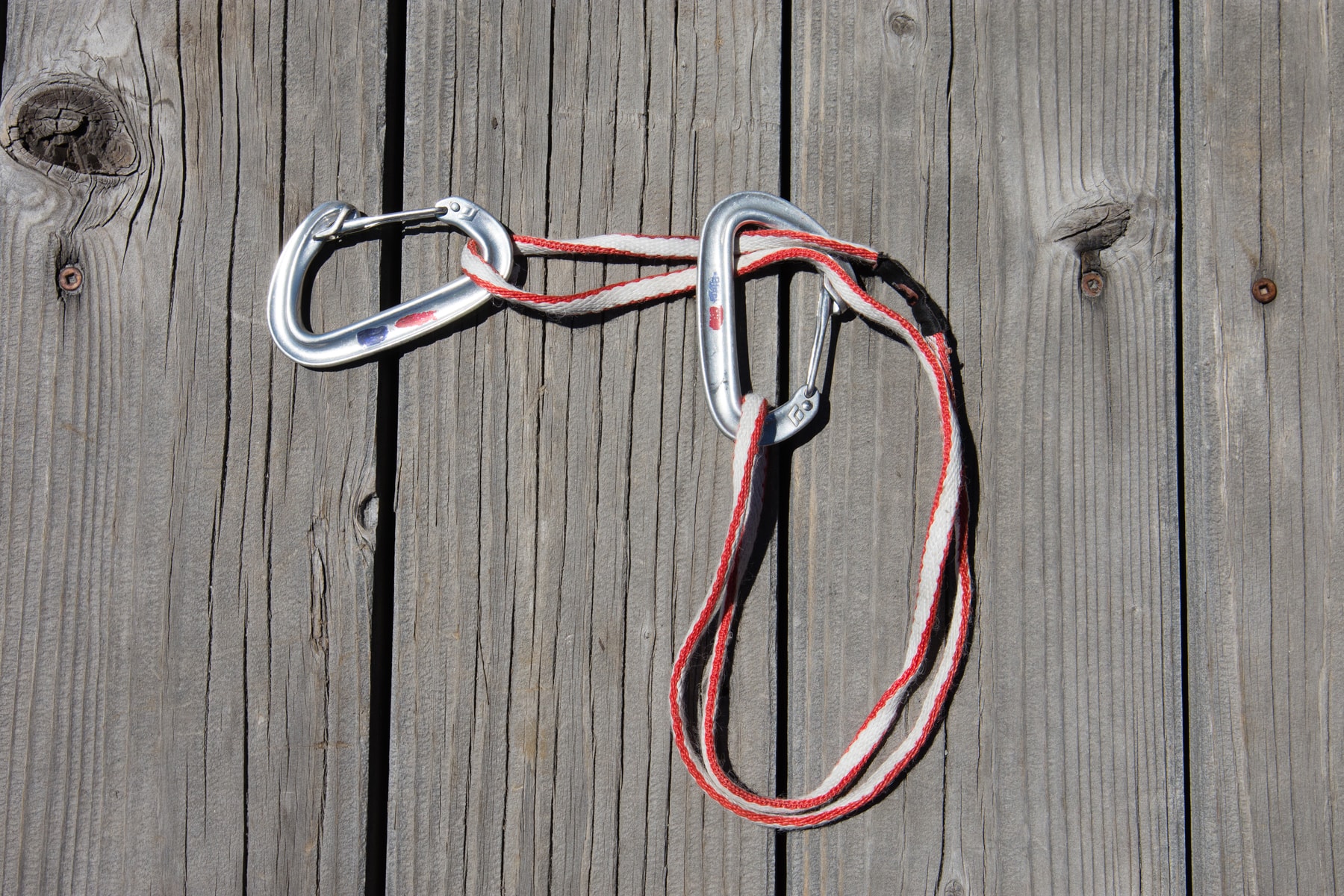 Feed one carabiner through the other Clip two strands of the sling When clipping a draw to a piece of gear, I will make the decision as to whether I want the draw extended or not.

Occasionally the sling will tie itself into a hitch around the gear-side carabiner. This is easily solved by fully unclipping the free carabiner and popping the hitch out, but this requires more thought and often two hands. 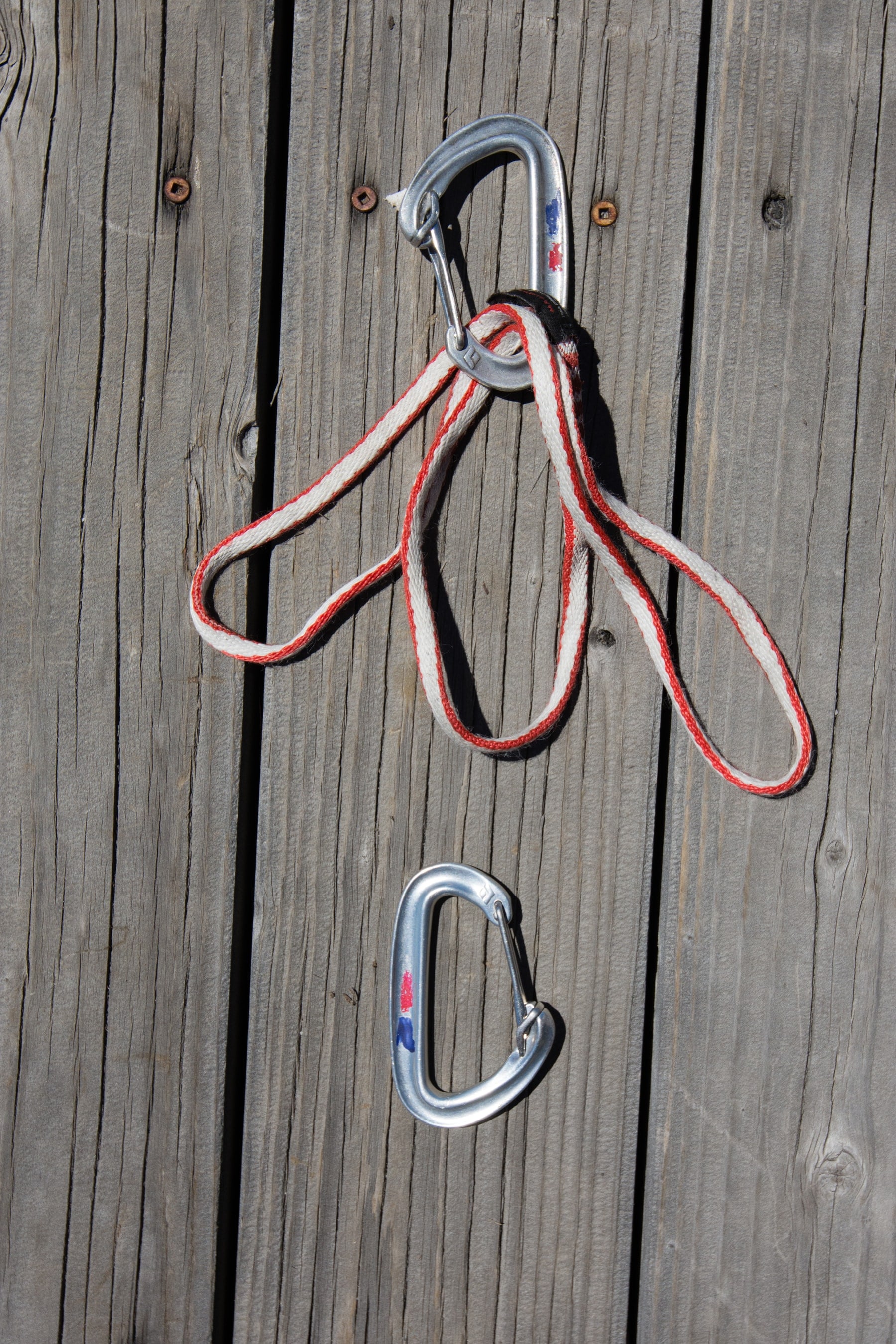 as they are more supple than many other Dyneema slings. I’ve also found that the flat seam tends to snag less than traditional layered bar-tacked slings. 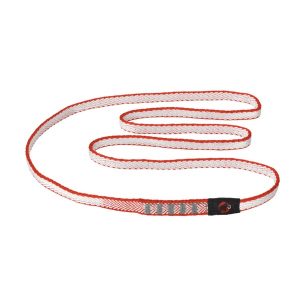 as they are light, reasonably priced, and have a shielded gate to avoid nose-hooking. I find the Oz are a bit small for easy handling with gloves on though, so for any ice climbing, I like using a slightly bigger carabiner like the CAMP Photon or Wild Country Helium. I prefer building my own alpine draws as I am able to change the carabiners depending on my intended objective. However, if you want to avoid the hassle of buying slings and carabiners separately, many companies sell pre-made alpine draws; I like the Trango Phase alpine draws as one of the more affordable options and like the Phase wiregates used on the draws. 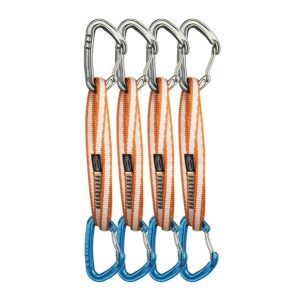 When (and when not) to use alpine draws?

When not to use alpine draws is perhaps an easier question to answer.

I typically do not use alpine draws on straight-up splitter crack climbs or well-bolted sport climbs. In these two situations, there is no real benefit of using alpine draws as rope drag is minimal and alpine draws are inherently harder to clip than quickdraws. I also tend to not use alpine draws when climbing hard moves directly off the ground or a ledge, as the extra length of the sling compared to a quickdraw or the cam sling creates the potential for a ground-fall.

When to use alpine draws is more nuanced and difficult to answer. As stated above, the biggest benefits of alpine draws are (1) reducing rope drag and (2) lessening the chance of pieces walking or coming out entirely.

Thinking about rope drag is often an issue on traditionally protected climbs of any length as gear placements may or may not be in line with the direction of the climb. Any time the rope runs through a carabiner, the friction between the rope and carabiner creates drag, which adds up over the course of a climb. The least amount of friction occurs when the rope runs straight through without bending at all. Conversely, the smaller the angle between the two sides of the rope, the greater the friction.

Using alpine draws allows you to effectively bring gear placements closer to a straight line than quickdraws. If you place a piece of gear 60cm to your left and then the next piece 60cm to your right, using alpine draws will effectively move the two pieces of gear to a vertical line below you, and rather than making a large “Z” shape, the rope will run straight up and down (more like an “I”).

When unmanaged, rope drag can turn an easy pitch into a nightmare of leg-presses, add untold resistance to your climbing, and make safe climbs quite heady. However, when properly addressed, rope drag is little more than a minor annoyance.

Walking occurs when a cam literally wiggles in the crack as a result of vibration in the sling.

If a rope running through a carabiner on a cam is taut, the sling of the cam will transmit the vibration from the rope into the head of the cam. If the cam is in a parallel or backwards flaring placement, the vibration will cause the cam to work itself further back into the crack, potentially to a point of beyond reach.

By using an alpine draw, the rope has more play and is less likely to pull taut on the cam sling (unless the climber falls or takes), and thus, lessens the propensity of cams to walk.

All that said, I do not always use alpine draws on my gear, as I often carry and place more gear per pitch than I am willing to carry draws. In these situations, I will often try to plan out which pieces need extension the most and which I can get away with clipping short. In general, I try to extend more at the beginning of a pitch and gradually lessen my use of draws as I climb. This way I can keep rope drag down as long as possible and minimize the chance of my early protection walking.

For use on natural protection

The other major advantage of using alpine draws and slings over normal quickdraws is the ability to utilize natural protection.

I often girth-hitch slings around small chockstones in a crack, drape them over horns or flakes on a wall, or use my creativity in using natural features to protect a pitch. Often using natural features is faster than placing a piece of gear and is sometimes the only protection available (pegmatite traverse pitch on the Scenic Cruise, for example).

Learning how to use alpine draws and slings with natural protection can go a long ways towards climbing more efficiently on routes of any size.

On a big route, I will usually take approximately eight alpine draws plus six or so slings with a single carabiner slung over my shoulder. Having both gives me the flexibility to use alpine draws for nuts, pins, or awkward cam placements, and then use the over-the-shoulder slings on easy cam placements that already have a racking carabiner on the cam sling.

over my shoulder as well. The double-lengths can extend placements even further than a normal alpine draw (think long traverses or crack switches) and are also useful in slinging chockstones or horns for natural protection.

Alpine draws do have some disadvantages, namely that because the carabiners are not clipped into a fixed loop like on a quickdraw they can move around freely on the sling. This can be frustrating, especially on overhanging placements, as an alpine draw is harder to clip quickly (quick…draw). For this reason, I still like carrying a small selection of quickdraws on many routes.

Additionally, the carabiners on an alpine draw can flip around and occasionally nose-hook. A nose-hooked carabiner can break under body weight in some cases, which is why I prefer using a carabiner with a small-profile nose that is less likely to snag.

There is also the slight possibility that a free-hanging non-locker will inadvertently flip over and back-clip, creating the potential for the carabiner to unclip itself in a fall. Although the chances of this happening are incredibly small, a high-profile accident in Eldorado Canyon several years ago proves that if you climb long enough, weird things happen. For this reason, I will sometimes use a lightweight locking carabiner on critical sling placements to make absolutely sure the rope will not come unclipped.

Obviously, alpine draws, like every other piece of equipment and technique, have their time and place. For me, that’s usually on traditionally protected routes, not necessarily in the alpine environment.

In places like Eldorado Canyon, I use almost exclusively alpine draws, as the protection tends to wander a bit. Replacing every quickdraw on your rack with a new alpine draw is likely not an ideal scenario, but neither is battling rope drag and stuck gear. Like any skill, understanding when and how to best utilize alpine draws will help improve your climbing.

Matt Zia is an outdoor educator, climber, skier, and photographer with an AMGA SPI certification as well as four years of experience working rock climbing and mountaineering courses for the Colorado Outward Bound School.

Related articles you'll love
Our 30+ most popular articles ever
Today’s Best Rock Climbing Gear Deals
200+ rock climbing videos
Strategies for Safer Rappelling
How to Tie Rock Climbing Knots
Gear You Ought to Know: Sterling Rope’s Hollow Block
The Best Way to Belay from Above
How to Build Your First Trad Rack
Climber Confessional: A Lesson in Backing Up Your Systems
How to Rappel if You Drop Your Belay Device
Climbing Rope Management During Rappel
10 Dos & Don’ts of Multi-Pitch Climbing
Why You Shouldn’t Use a Daisy Chain for a Personal Anchor
Get daily updates by Liking us on Facebook
Free rock climbing PDFs on technique, training, knots, and more 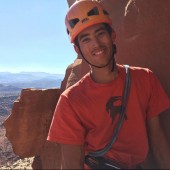