I Will Tell My Son

The following is a transcript from the video, I Will Tell My Son, by Kody Kohlman and Martin Brodsky.

i will tell my son how we climbed mountains:

how we woke before dawn

our breath pushing steam into the morning

those jagged peaks rising into the last of the stars

they called to us

tempting us to join them in the holy heavens

we began walking in the dark

a path lit by our lamps

the ambient light off a city in the plains

just enough to see our footsteps

but of little else that lie ahead

the musk of old pines hung in the air

the trees surrounded us

eyeing everyone that passed

from rock to rock

up and up and up

pushing the stars back into the universe

the sun warmed our bones

giving strength to our tired bodies

until we laid first eyes on the summit

we grabbed the stone with our callused hands

hauled ourselves deeper into the thinning air

waiting for a clear path

for the last push to arrive

we counted the steps

we counted the breaths

what would it take to get there?

the drama buzzed on our tongues

did we make it?

not everyone makes it

not everyone makes it back, either

what mattered was the try

the push to leave comfort behind

a life made whole

by long days under the sun

and late nights around the fire

and knowing that some things

are bigger than we will ever be

i will tell my son how we climbed mountains

he will climb mountains, too 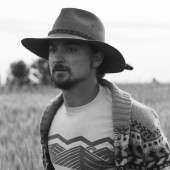 Marty Brodsky is a climber, carpenter, and writer living in the mountains of Colorado. You can read more of his stories at www.martinbrodsky.com