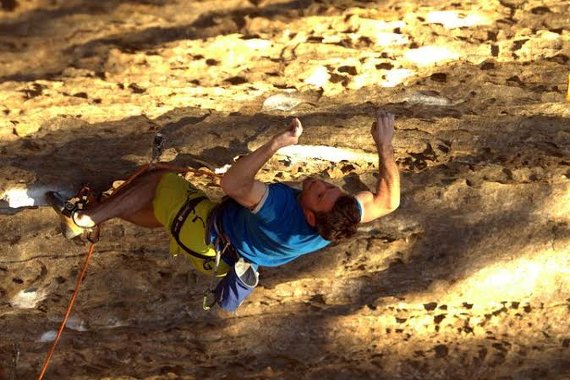 In this week’s Climber Spotlight, we hear from Mike Doyle —a 37-year-old software engineer who has consistently sent 5.14 for over 15 years and doesn’t plan on stopping anytime soon. This is Mike’s story about coaching the Canadian junior climbing team, how he balances elite climbing with a full time job, and why he isn’t cool with guitar playing at the crag. How did you get into rock climbing? Tell us about the early days of your climbing career. Redpoint of the Mandala in February 2008. Photo: Audrey Sniezek

I started climbing through an outdoor program in my high school. Initially I wanted to be a mountaineer and guide but a friend’s passion for sport climbing and my lack of desire to spend weeks sitting around in bad weather led me down the path of climbing more and more.

Eventually I started competing and really enjoyed that aspect of climbing; both the social scene of the competitions and the drive to train and get better. Through university I competed a bunch and eventually transitioned into a routesetter and coach instead of a competitor.

During the early years I climbed a lot in Skaha, Squamish and Smith Rock but I didn’t get a chance to travel much until after University and now climbing is my main reason to travel and why I live in Las Vegas.

You used to coach the Canadian junior climbing team. What was it like to be involved in the competitive climbing scene?

I have great memories of being a coach and still consider some of the other coaches and kids I coached to be among my closest friends. I truly am proud of the years I coached, and consider myself to have been a better coach than I ever will be as a climber. Climbing at the Canadian National Championships in May 2014. Photo: Shane Murdoch

As a coach I tried to get the best out of the climbers and sometimes this meant pushing them to a point where they didn’t love climbing and that was hard. I have always loved climbing, all aspects of it, but I felt that my job as a coach—in particular the coach of a competitive climbing team—was to push the kids and see what they were capable of. Some kids blossomed, some didn’t. Not an easy line to walk.

As far as the actual competition climbing scene I think there are pros and cons with it, and with indoor gyms in general. Even when I was actively promoting climbing I was worried about climbing becoming more popular and climbers overrunning the climbing areas.

It’s inevitable that climbing will become even more popular than it is today, and I think we need to really take a hard look at how we mentor climbers in the transition from indoor to outdoors. I started as an outdoor climber with a respect for the environment and the people around me.

I think new climbers need to be taught the ethics and etiquette of the sport, and told immediately if they are doing something wrong. Most climbers are not confrontational and would rather avoid the awkward conflict than to engage a stranger in a debate about their actions.

I know it sounds weird, but I compare it to golf. If you go golfing you are immediately told some basic etiquette or you will be scolded, at least I was. I think we need that in climbing. No guitar playing at the crag—sorry.

Have you found it hard to balance your love for climbing with a full-time job?

Definitely, and it’s a balance I am still struggling with. I am pretty fortunate to have chosen a profession where I can work remotely and with some flexibility in my hours. It took years of hard work to get that flexibility, but it makes climbing on a regular basis possible.

It’s still difficult to tackle a hard problem at work and then muster up the energy to train or even try hard on projects. I wish I had more time to climb, in particular more time to do long routes, but right now I don’t. Hopefully in the future. On Path of Yin in the Grampians, Australia, 2007. Photo: Mike Doyle Collection

What is one of your proudest climbing achievements?

Without a doubt I am proud to have climbed Necessary Evil (5.14c) this past winter. Not so much for the grade but for not giving up and walking away.

I would have to say that my ‘proudest’ climbing achievement is that I first climbed 5.14 in ’98 and I am still able to climb 5.14. Many of the people I climbed with in the late 90s don’t climb anymore and that’s too bad. I still love the activity and love pushing myself. The motivation comes and goes but hopefully I’ll keep at it for years to come. Oh I’ve had some not-so-proud moments as both a coach and as a climber. As a coach I remember cutting a kids hair because, well, it was ugly. But there’s no excuse for that, it was bullying—plain and simple. Granted I had a good relationship with the kid, but it’s still something I regret. Working the moves on Just Do It, April 2015. Photo: Jason Karn

As a climber, there are a few moments that stand out for their humor and humility, but the one I laugh at the most was climbing with Will Stanhope in Indian Creek. He had just done a 160′ 5.10 with three pieces of gear and handed me 8. I still backed off (there may or may not have been tears) because I wanted more gear … so sad. The look of disappointment on his face was priceless. I also learned to look at the guidebook instead of trusting him.

Climb a lot, climb a lot of different styles, and climb when you are tired. When you are tired, try to climb easy routes in the best way possible. It’s then that you have to rely on being efficient and I think that’s when you learn the most.

That’s a tough one. Hmmm … Make sure that you are representing yourself well when dealing with members of the climbing community. Eventually you’ll want to transition to another aspect of the industry and people don’t forget a bad encounter.

What do you love most about climbing?

There are so many aspects I love. I love the fact that it is a great physical and mental workout, it gets me outdoors and takes me to amazing places but the best part is definitely the people I have met and the relationships I have developed through the lifestyle that is climbing. We send a huge thank you to Mike for sharing his story with us (and for letting us crash at his house). We wish him the best of luck in his climbing career and can’t wait to see what he does next! To learn more about Mike, check out his Instagram.