Noel Cockney: Risk and Traditionalism on Big Walls and in the Arctic I met Noel in Tuolumne, the eastern region of Yosemite, in 2016 on a climbing trip with a friend. His mental game on the slab domes of Tuolumne was just as inspiring as his love and respect for his fellow climbers. When I found out about his current work as a guide in Inuvik, near his hometown of Tuktoyaktuk in the Northwest Territories in Canada, I wanted to learn more about what growing up in the arctic was like as well as how it influenced his climbing.  In place of a regular training regimen, Noel is out working in the wilderness of the Northwest Territories, teaching about his native lifestyle, culture, and traditions. He says he still gets out and enjoys one extended climbing trip per year, preferably one filled with some adventurous big walls. Noel’s climbing strength isn’t derived from a climbing gym or even a hangboard, but from a pure love of the sport and the land, as well as a joy of problem-solving and overcoming obstacles. The lengths to which this has taken him are inspiring! Favorite traditional festival: jamborees, each community has one, which lead to weekly jamborees across the Northwest Territories throughout the spring

What was it like growing up in the arctic?

I am a part of the Inuvialuit. I grew up in the traditional Eskimo lifestyle, hunting and fishing on the arctic tundra. It’s a harsh environment and we would travel to different camps for hunting and fishing. During school, our holidays coincided with times for us to go hunting and fishing, so we didn’t miss any school (K through 12). Nowadays, the holidays are the same as in the south, so there are a lot of students who miss school during the harvesting times. I don’t remember how old I was the first time going out hunting because it happened when my mom brought me up here after I was born in Calgary, Alberta. We were always out on the land because that was all that we knew. The camps that we have and go to aren’t too far; along the coast, only about 25 kilometers from town, and inland we go about 70 kilometers. The summers would be our longest time out on the land, spending most of it out at our camps. How did you get into climbing?

My first climbing experience was indoor bouldering, and then one day outside with an Outward Bound course. After that, I did a NOLS semester in the southwest in 2007, which is when I really got started. I’ve pretty much been doing it ever since.

How has your childhood in the arctic influenced your climbing?

In arctic hunting, there are a lot of obstacles that can come up and I find that is true in climbing as well: when you’re above your piece and you have to stay calm and make decisions. Weather, especially, in the arctic, can change very quickly, and so I have had to push through blizzards that came up unexpectedly. We learn to accept these obstacles because we have no choice, it’s our means to survive. Similarly, when climbing a runout route, we generally have to keep going, to stay focused so that we can problem-solve.  Sometimes a snowmobile or a boat would break down when we’re out hunting and we’d have to solve that problem. When climbing, sometimes you drop something; you have poor rock quality; or gear malfunctions; and you have to stay calm, figure it out, and keep moving. What about wildlife? Would you consider that one of your hazards in the arctic?

Mmm not so much. We never had any real close encounters, but we also don’t see ourselves so separated from other living things. In our culture, we are all people sharing the earth, so we don’t fear animals as much.

I felt privileged to grow up the way I did. I don’t think my life changed that much, honestly. I got to go to school at Northland College in Ashland, WI, USA, which is surrounded by three Ojibwa tribes. I got to learn a lot from them and share my culture in return. On the NOLS courses I instructed, I got to teach traditional methods of navigation and got to tell stories from my childhood. I feel lucky to have grown up how I did and even luckier to be able to learn more from other people and share my story. A lot of people my age stayed home, got married, and had families. There is also a lot of alcoholism in my community. I’m grateful for the opportunities I have had to share my traditions, learn, and be able to offer more to my community now that I have lived away. You seem to enjoy learning from other people just as much as you like celebrating your own culture, could you expand on that?

Yeah, as a small tribe we learn that we can’t really be isolated. In order to survive, we have to share and learn from each other, and so I like to learn from other indigenous people and other people in general. Staying open, sharing, and learning is key to our survival as a people.

What do you think of the current state of climbing? I would say the average climber these days tends to have a very different mindset than your traditional values.

I tend to be a purest in climbing, but if there is a safer way to do something than there used to be, I would rather do it that way. I really enjoy my life and I’d like to keep living it, so minimizing risk makes sense to me.

On the topic of purism, what is your opinion on crack gloves? Cheating? Aid climbing?

I have no problem with crack gloves. I don’t think they are cheating. If it’s between using and throwing away a lot of tape or using crack gloves, the gloves make sense. I just haven’t found a pair that fit me very well.

Do you have trouble finding climbing partners with whom you can relate to?

I think part of coming from a small, indigenous community, as I said before, is that we learn to accept people the way they are. I am grateful to all of my climbing partners and we are bound to disagree on something once in a while. In a hunting and fishing community, too, we learn to share and be generous. If someone has a tool that malfunctions and we see them on the trail, we’ll offer them a spare that we may have. If their equipment breaks down, we’ll help them fix it. In the arctic, we are all in it together. I see climbing partnerships very similarly.

What are you currently working on in your hometown?

I worked for three years guiding for Tundra North Tours, an Inuit adventure tourism company sharing the arctic experience with all sorts of people. I now have a programming position for Dechinta, an institution that offers land-based programming for university students. These programs bring students out on the land and teach traditional skills and history of the area. Aside from spreading awareness of your community and culture to other groups, do these programs help support local people in other ways?

These guiding services hire a lot of local people, so the money does go back into the community that way.

Is there any climbing in Inuvik?

Not really… There is some potential but it just looks pretty crummy. Chossy, overgrown… I want to do some development in the future but it would need a lot of work. I’ve considered turning some old, retired sea cans (basically shipping containers used on boats) into bouldering caves. I think it would be pretty cool to get more locals into climbing because it’s a fun activity and good exercise.

Do you have any upcoming climbing goals or aspirations for the next couple of years?

I hope to get back down to Yosemite in the spring to get on big walls again, but just climbing, in general, is something I hope to continue doing at least once a year. 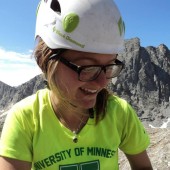