It was recently announced that climbing would be in the Olympics and I’ve heard a variety of reactions to the news. Some are really excited while others worry how it will affect the sport.

Being a snowboarder and seeing how the Olympics have affected snowboarding, I also had my doubts that there would be any positive effect. After mulling it over and considering how things will change going forward, I can see one huge benefit of bringing climbing into the Olympics …

Climbing, along with most outdoor sports, has historically been reserved for middle to upper-class white people. We do have young superstars, Ashima Shiraishi and Kai Lightner, but the climbing community is vastly lacking people of color. And recently, REI spotlighted Brothers of Climbing, a climbing group for people of color. An effort is being made to bring diversity into climbing but still—our community seems to be white washed.

In 2020, on the international stage of the Olympics games, we will start to see more world-class climbers who aren’t white. And that’s not to say that these climbers don’t already exist. We have Abhishek Mehta from India who climbed India’s hardest route, Ganesh (5.14a), last month. There’s also Felipe Camargo from Brazil who put up Fortaleza, the country’s first V15, and did a first ascent on Pedra Riscada with Sasha Digiulian.

These are people of color performing at an elite level who will be recognized on a global scale at the Olympic games. Seeing people from around the world climbing in the Olympics can help to bring diversity to our community.

This is one argument for a potential benefit of climbing’s inclusion in the Olympics. To hear other opinions, take a look at what the pros have to say. 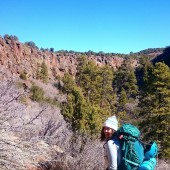 I'm a Massachusetts native currently traveling the country in a sprinter van with my boyfriend. Most days I can be found at the crag but I also enjoy hiking, snowboarding, mountain biking, and trail running. I'm trained as a sound engineer but I'm a practicing dirt bag.