Essay: Devils Tower — Why I Can’t Write About the Voluntary Closure Last night, after reading Devils Tower: Why We Don’t Climb in June, I turned to my friend Dylan, another guide here at Devils Tower Lodge, and for probably the 15th time in the last few weeks, said, “I don’t know what I think.”

“I certainly know I couldn’t write a piece entitled Devils Tower: Why We Climb in June, and that concerns me, because I’m climbing,” I continued.

He nodded, paused, said, “Yeah, I hear ya. But could you write what we just read? Obviously not. The issue is just so nuanced.”

I can’t write about the voluntary closure, and here’s why.

Pick something across the room to look at, right now. Develop an opinion on it, a strong one. That couch cushion: it’s black and red and has a triangular design in the middle. That lamp shade has vertical folds that expand from top to bottom. That wood bookshelf has uniformly flat shelves. Now, put down your computer, get up, and walk over to whatever you’re looking at. Look closely, and see if your opinion holds.

I was here at Devils Tower last June too, guiding and climbing, and heard the voluntary closure mentioned maybe once in the entire month. Whether good or bad, right or wrong, it just wasn’t a thing. It wasn’t a thing until one of the local climbing rangers, Lucas Barth, put it on Supertopo and Mountain Project this year.

I’m not criticizing Lucas at all, not in the least. We’re friends, we’ve climbed side-by-side on the Tower, projected the same routes, and I think he’s doing his job very well. In my opinion, it was a smart move to put the issue on Mountain Project, to get the climbing community talking about it. He’s done more for the voluntary closure in the last month than anyone has done in the last 22 years.

What I’m criticizing, however—and that’s even a strong word—is what I’ve been observing in our culture for awhile now. I’m talking about our tendency as humans, and more specifically, as educated Americans, to, with little information, choose a side of an issue and defend it to the death, even when it means divisiveness, judgment, and negativity.

It concerns me that it’s become all too easy to, without barely stopping to think, take a stand for issues very distant and impersonal. Not only easy, it’s become trendy. We all, myself included, know where we stand on every hot topic item. Native issues? We owe them everything. Black lives matter? Of course. Philando Castile? A ridiculous display of racial profiling and injustice. Keystone Pipeline? Bears Ears? The repeal of the Affordable Care Act? And we will take these opinions to the grave with us, and jump on anyone who sees things differently. Look where this is getting us: our nation has never, at least in our lifetime, been so divided.

It concerns me that, if I didn’t live here at Devils Tower for the summer, I too would be vehemently on the side of those supporting the voluntary closure, labeling all those who climbed or defended climbing here in June as horrible, racist, privileged, entitled and bad.

It concerns me that people can say a few words on Mountain Project, or choose to go to Ten Sleep instead of Devils Tower (because they’re sport climbers anyway), and then feel good about themselves, like they’ve done something. In reality, no one is thinking about this in a way that does any good for our human race; no one is affected to their core.

And meanwhile, the people of the Pine Ridge Reservation, the closest reservation to the Tower, still live in the second poorest county in the country. The infant mortality rate is still five times the national average; the average life expectancy is still lower than countries such as Sudan and Somalia. Eighty percent of residents are still unemployed, and a few years ago when the reservation was still dry, 12,500 cans of beer were still sold every day in the town just outside the boundaries. The two rehab centers promised when the res transitioned from being dry have still not been built. Sixty-one percent of residents under the age of 18 still live below the poverty line, and the people of the Oglala Sioux Tribe still continue to battle for their voice and rights under a mixed-blood, non-Lakota speaking leadership that fails to distribute government funds, instead earning comfortable salaries and enjoying lush business trips. It makes me question whether all of these people even have time to think about the renaming of Devils Tower or the June voluntary closure when they’re worried about their health and safety. It concerns me that we in our forums with our climber-centric views care about debating over a tower of stone while an entire reservation sits nearby, forgotten. It concerns me that with our trendy hashtags and social movements, we might be always missing the forest for the trees.

I’m just like the rest of you. I stood with Standing Rock, and raised awareness for Bears Ears, and did so knowing that my association with those areas pales in comparison to that of the native people who call them home. I couldn’t sleep last Friday night, enraged at the injustice of Philando Castile. I supported the women’s march, and went to my local precinct meetings, and know the right hashtags and the meaning of white privilege and probably have experienced mansplaining too.

Yet all of a sudden, I find myself on the scene in one of these hot topic debates, and lo and beyond, I’m on the other side of things. I’m in Devils Tower in June, and I’m guiding, and I’m climbing.

And I’ve started to see that every issue is far more nuanced the closer you get to it. Just like anything, the more involved you are, the more detail you see. You might look at photos of the Tower and think it’s a uniform plug of vertical cracks. You’ll come here and realize that the South side is more varied and less vertical, that the North Face ramps up to a few hundred feet of vertical terrain before the rock turns chossy. That there’s an area on the east side called the Window, where a series of about ten columns broke off, leaving a roof system and insanely thin cracks underneath. You’ll realize that pigeon shit lies in many crevices, that cracks are often lined with grass. That the summit actually isn’t flat at all.

You’ll come and you’ll sit down with rangers, and you’ll listen to the origins of the June closure. You’ll hear what they have to say, and the tone of voice in which they say it. You’ll see the native presence, and come to understand the greater issues—at least a little. You’ll meet with a local chief and hear him talk about respect, and climbers, and the sacred Tower you’re sitting under together, and you’ll learn what he cares about. You’ll see the tourists come and go in their RVs and Harleys. You’ll see van loads of children from the Pine Ridge Reservation roll up, and they’ll run up to you brimming with questions, pulling the cams off your harnesses, begging to carry your pack down the hill. You’ll meet Frank Sanders, who has been here for longer than anyone in recent history. You’ll see the prayer bundles tied to trees at the base of the Tower; you’ll watch as young tourists scamper up and down the boulder field under the towering west face.

And then, you’ll have a say. Maybe you’ll grow even more vehemently opposed to climbing in June, and that’s totally fine. Maybe you’ll change your mind. Maybe, like me, you’ll get even more confused. But at least you’ll have a right to your opinion, and I can almost guarantee that you’ll develop more grace, and tolerance, and perspective in the process. Hopefully you’ll be inspired toward less protest, and more action.

I realize this doesn’t answer any questions. I realize that I’m still climbing on the Tower in June. I realize that you might be judging me. And to that, I say: my point exactly. Can we cease from taking sides, at least for a moment, and stop to listen? Can we try to not have the answer; to instead be people with grace, with a desire to learn, with an openness to know both sides? Can we practice saying, “Hmmmm, I don’t know. Let me think about that. Let me grow to know that place, to know those people.”

And then, I’d absolutely love to hear what you have to say.

This essay was originally published on June 24, 2017 on the website of guide and writer, Jenny Abegg. 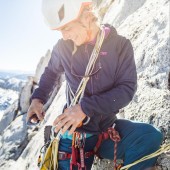 Raised by mountain-loving parents on the flanks of the North Cascades, Jenny’s idea of a perfect day starts and ends wearing a headlamp, and includes a snowy approach, dry granite, and endless high fives with a favorite partner. Her passion for adventurous climbing has led her from the jungles of Rio to windy spires in Patagonia, from the unexplored faces of the Purcell Mountains to heady granite domes of North Carolina. Currently based out of Ol’ Blue, her trusty 1995 GMC Safari, Jenny is a climbing guide and a writer, exploring the topics of climbing, life, and the spaces between. She is published in many online and print sources, including Climbing Magazine, Alpinist, Adventure Journal, and Sidetracked. Jenny is a PCGI certified Lead Guide and guides at Devils Tower, WY during the summers.