Don’t forget the spare batteries. Ever.

My friends classify me as an obsessive climber. I get an idea in my head, and I don’t let go. The Harding Route on Keeler’s Needle was one of those ideas.

Topping out at 14,245 feet, the striking rock formation pierces the sky. She stands tall and proud next to her big sister, Mt. Whitney, the tallest peak in the continental United States. Pointing out Keeler’s Needle, stoked on the ascent and the adventure. Photo credit: Scott Sinner

I salivated over this route for months. I scratched other trips from my planner as freak blizzards pounded the Sierras in the middle of July. All I wanted, with every fiber of my body, was to be in the mountains, smack dab in the middle of a sea of granite. I wanted to have layers of dirt covering my body while searching for alpine lakes to nourish my soul.

Before this summer, I had only dreamed of being an “alpine” climber. With my first taste of climbing in the mountains, I was hooked. The week before this mission, I climbed the North Ridge of Mt. Conness and Positive Vibrations on the Incredible Hulk. Four days later, my lust for the mountains could not be contained. I was back, secretly sleeping among the trees of the Whitney Portal, setting my alarm for 3 a.m., so I could conquer Keeler’s Needle in a day. The first sunrise we watched on the approach to Keeler’s Needle. Photo credit: Hannah Hall

We emanated joy and good energy. My partner, Scott, and I belted Taylor Swift songs while moving into the crux 5.10c offwidth. Pitch after pitch, Scott and I were blown away by the quality of the climb.

they said? The granite was superior! We onsighted every pitch as a team. Nearing the final pitch to the summit on what was supposed to be 4th class terrain, we were simul-climbing and I felt out of control as the second. To make matters worse, Scott kept stopping to build anchors as we found ourselves doing heinously hard moves.

I peeked my head over a section of climbing that had been especially difficult. We had to be close to the summit, but I had thought that more than once in the past hour and a half.

Scott was beyond an excellent partner and climber—but I had had it. I wanted control, I wanted to be leading, I wanted to get off of this fucking mountain. I grabbed the cams and slings. I was running up boulders, placing only as an afterthought. Reveling in the control, I felt calm as I finally shimmied up through a chimney to catch the final glimpse of blood red sky as the sun made it’s final bow to the day.

A small twinge settled in the pit of my stomach.

Scott calmed my nerves as he met me at the summit. He was knowledgeable in the alpine and used to the greeting of the night on a big day. We started laughing and cheering—letting ourselves soak in the ascent of Keeler’s Needle.

I pulled out the two most essential items of the day: my headlamp and a “share” size package of Skittles. I stuffed handfuls of yellow, red, orange, and green in my face as we made our way off the back of Keeler’s.

To descend Keeler’s Needle, a small hike off the back side leads to the normal hikers trail that ascends Mt. Whitney (14,505 feet). After summiting Mt. Whitney, we continued on to a small chute known as the Mountaineer’s Route, a 3rd class gully.

Stepping into the gully, I looked down into a void of darkness.The night exaggerated the slope, my heart pounding as I looked down to discover my feet were precariously perched on a thin sheet of ice.

With the weird summer the Sierras were having, ice and snow coated the upper section of the route. Slipping my way down, following closely behind Scott, my headlamp started to do something every climber dreads. The light flickered. And then, darkness.

Scott, hold on, I need to get my extra batteries out.

Scott shined his light on the narrow pathway so I could see into my backpack. I started pulling things out, more and more frantically.

What do you mean? You bought them at the store last night.

I know, they aren’t here.

Related: Pitch 27: A Journey for The Nose in a Day

I precariously shimmied down the shadowed boulders and ice, making my way slowly to Scott. The angle of his light on my path created large shadows that made it difficult to navigate. We sat for a second in silence as we brewed over our choices.

I broke the silence.

Scott, we just did one of the most badass routes of our entire lives, I don’t want to die on the descent because I was an idiot and forgot the batteries. Let’s just sleep on the top until sunrise and then head down.

Scott viewed us as a team. He is one of the best climbers I know at taking his ego out of the climb. He didn’t view our summit bivy as my fault—even though that is how I felt. He was content and happy to accept whatever decision I came to, and he made the best out of whatever adventure was in store for us as a team.

People occupied the small cabin structure on the summit of Mt. Whitney, so we found a nice flat area wedged between some boulders. In hindsight, we should have just made the people share. They did have sleeping bags.

We took out the rope and laid it across a semi-flat patch of dirt as our “sleeping pad.” We then took our harness, chalk bag, climbing shoes, camelback, and helmet and laid them across the rope to use as “cushioning.” My climbing shoes were my pillow. Luxurious. I layered up with my R1 patagonia fleece, lightweight puffy, and rain jacket. We laid an extra jacket across the both of us as we settled in for the night. Scott laid down, awkwardly next to me, his arms by his side.

Scott, you have to cuddle me.

Are you sure your boyfriend is going to be okay with this?

We are bivvying on top of Mt. Whitney, the tallest peak on the continental US, with no sleeping bag, I think he will understand.

Scott stands at 6’2”, weighing in at about 180 pounds. I am 5’4” weighing 120 pounds. For me, being the “big spoon” felt like being a small, scared monkey latched onto Scott’s shoulders. I was desperate to suck any heat I could from his large body, unwilling to loosen my grip.

Once the partner in the position of the “big spoon” could no longer endure the cold, they would shake the “little spoon” awake and proclaim,

The partner who was the “little spoon” would turn over and assume their new position as “big spoon.” This person would then count the moments they could return to the cocoon the other partner now occupied.

Towards the end of the night, there was no chance for either spoon position to get warm. The cold was all consuming and there was no escape. This was about the point Scott and I began singing, “Shake it off” (the theme song of the trip) by Taylor Swift, while we both uncontrollably shook next to each other. I don’t know how we managed to keep a smile on our faces. I think we somehow made each other laugh the entirety of the night.

With the first glimmer of sun, Scott and I were packing up our lavish bivy. My decision to sleep on top seemed silly in the fresh light of day. The darkness had been deceiving. The gully was nothing but a mellow down climb. Still, a smile plastered itself to my face as I watched the sun rise, bathing the mountains in it’s embrace. The mountains I was standing amongst took on new colors, painted in oranges and reds that filled my heart with warmth. Enjoying the sunrise after a rough night on top of Mt. Whitney. Photo credit: Scott Sinner Trying to keep myself awake by bathing in an ice cold alpine waterfall on the descent back to the Whitney Portal. Photo credit: Scott Sinner

The hike down was a blur. The burger and champagne at the Whitney Portal store nothing but a faint memory. The pint of vanilla ice cream and rootbeer we purchased at the Lone Pine grocery mart filled our bellies as we made the long drive home to Mammoth.

Satiated for the moment, I let the events of the past 24 hours roll through my mind. My appetite for adventure seemed satisfied, but only temporarily.

Related: To Keep Moving Forward: How Doing Hard Things Can Help Us Heal 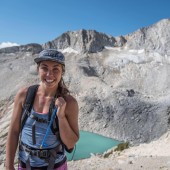