Essay: An Ode to the Developers

These days, it’s easy to forget that those beautiful well-maintained trails we walk down weren’t always there.

It’s easy to get psyched on your new 5.12 project and forget the name of the route.

It’s easy to complain about the directions in the guidebook that is 300 pages long; they said left at the cairn instead of sharp left.

It’s easy to expect that since the route is known and in a guidebook, or there’s been a video of it, or your friend has done it before that it should be full of bullet rock, quality movement, and perfect protection points.

It’s easy to forget that all of these things weren’t always here.

It’s easy to forget that the lichen-free boulder you are climbing was once blanketed over by so much lichen you couldn’t even tell if there were holds.

It’s easy to forget that those wonderful strong bolts that catch you on your project weren’t just magically placed there.

It’s easy to forget that these trails were once a thick forest of dense trees, brush, and spiky plants that wanted to kill you.

It’s easy to forget the developers.

This is an ode to the developers, past-present-and future.

If it wasn’t for the small percentage of climbers who continue to light the torch and pass the torch to new eyes, we wouldn’t have any of the amazing climbing areas we have today. Of course, the rock, the cliffs, the boulders, the aesthetic beauty of those overhanging prows that jut out high above the ground would still be there. But the routes we take up those aesthetic beauties would not. It’s the developers that make all of your long fun days in the mountains possible; it was their vision and belief in the unknown to be known that did it all.

How many times have you gotten psyched on a route and remembered the number but not the name associated with it?

The route you are climbing has a story, the name behind that route has a story, and the number associated with that route has always been there. The difficulty wasn’t brought about from the climber who set his sights on the unclimbed. It was always v-(insert difficulty), but it wasn’t always The Ironman Traverse, The Path, The Process, Facelift, Midnight Lightning, The Nose. The names come from the story that the developer chose to leave behind.

At times, yes—it can be a random name thrown out for some arbitrary reason. But at other times it can be a name associated with the deep process that the conquistador went through to unlock the mad science of the movement of the route, the timing of where they were at in their life, and the community that supported them. The name of a route entails a hidden history of the first ascensionist. That history has meaning, and we should respect that meaning left behind by the route developers. Remember the name of the route you’re climbing. Don’t get obsessed with the grading, but instead get obsessed with the understanding.

This is an ode to the developers. Learn the history, respect the past, and light your torch into the future. 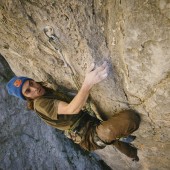 Paul Roberts is an adventure philosopher at heart. He has been climbing for 10 years and is continuously exploring the mental game of rock climbing and its transferability to life lessons. Paul travels the world teaching mindfulness and rock climbing workshops through his own company, Mindful Routes.