In Search of New Mountains (From Yosemite to Denali) We planned this a good time ago. First, as all dreams begin, it was a grand, abstract idea.

How cool would it be if we bought a van and road tripped to Alaska?

we asked each other with the giddy, gut-deep excitement that comes along with the “what if’s?!” Ryan had worked in Denali National Park before, and waxed poetic about the mountains.

Bigger than you could ever imagine,

and I was sold. I loved the granite cliffs of Yosemite more than anything, with their immutable solidity. It was where I learned to climb, where the obsession began and skills were cultivated when bare flesh met cold rock. But just as much as I loved their grandness, I knew they would always be there. And so it was time to look forward to a new adventure.

We both knew that after spending a year in the Valley we’d be ready to leave by the summer (the onslaught of tourists and heat a good enough reason to leave in itself). So as the miraculous way some things fall right into place in life—buying a van off a friend, scoring interviews and lining up jobs, and saving up just enough money—we were ready to leave by the end of April.

Leaving was bittersweet, and we watched out our van windows as all the walls we had yet to climb passed us by. The Valley had contributed so much to who we now were! It had cultivated us into people whose life’s passion was now focused on the mountains and the ways we could climb them.  It was a home with a rag tag group of friends with frenetic energy and laughter, and shared memories of adventures—both the successes and the epics, and all the lessons learned in between.

But the best time to leave is when you start getting too comfortable.

When the excuses, “not enough money,” “need more time,” and the dangerous “someday soon, but not now,” become a regular part of your vocabulary. When the desire is there but is not strong enough to rip you out of your comfort zone and force you to start all over again. That’s when you know it’s time.

So my friend Ryan and I are off. We’re driving 3700 miles from California to Alaska which most people we talk to think is crazy. Longer than crossing the U.S. coast to coast, more remote as we pass through miles and miles of the “no man’s land” that is Canada’s British Columbia and Yukon territories, and more rugged as the mountain passes thicken and the frequency of gas stations thin. As I write this, we are driving down the Alaska Highway—a two-lane, thousand mile stretch, with portions of gravel road, jagged snowy peaks in the distance, ghost towns and wild animals, from bears to buffalo, caribou to moose.

The closer we are to the Arctic Circle, the more I believe that we are really out there. And the mountains, although different, being covered in snow and seemingly insurmountable, are calling, and I’m beyond excited to start from the beginning again, and learn how to climb them. 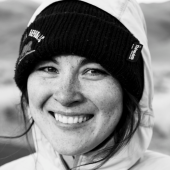 Miya calls Yosemite Valley home half the year and Bishop, CA home the other half. She is a climbing guide as well as a writer and photographer, a lover of long alpine routes in the High Sierra, hard sport climbing on granite cliffs, and is on a reluctant road to becoming a boulderer. Follow along on her Instagram for more photos and stories: @miyatsudome