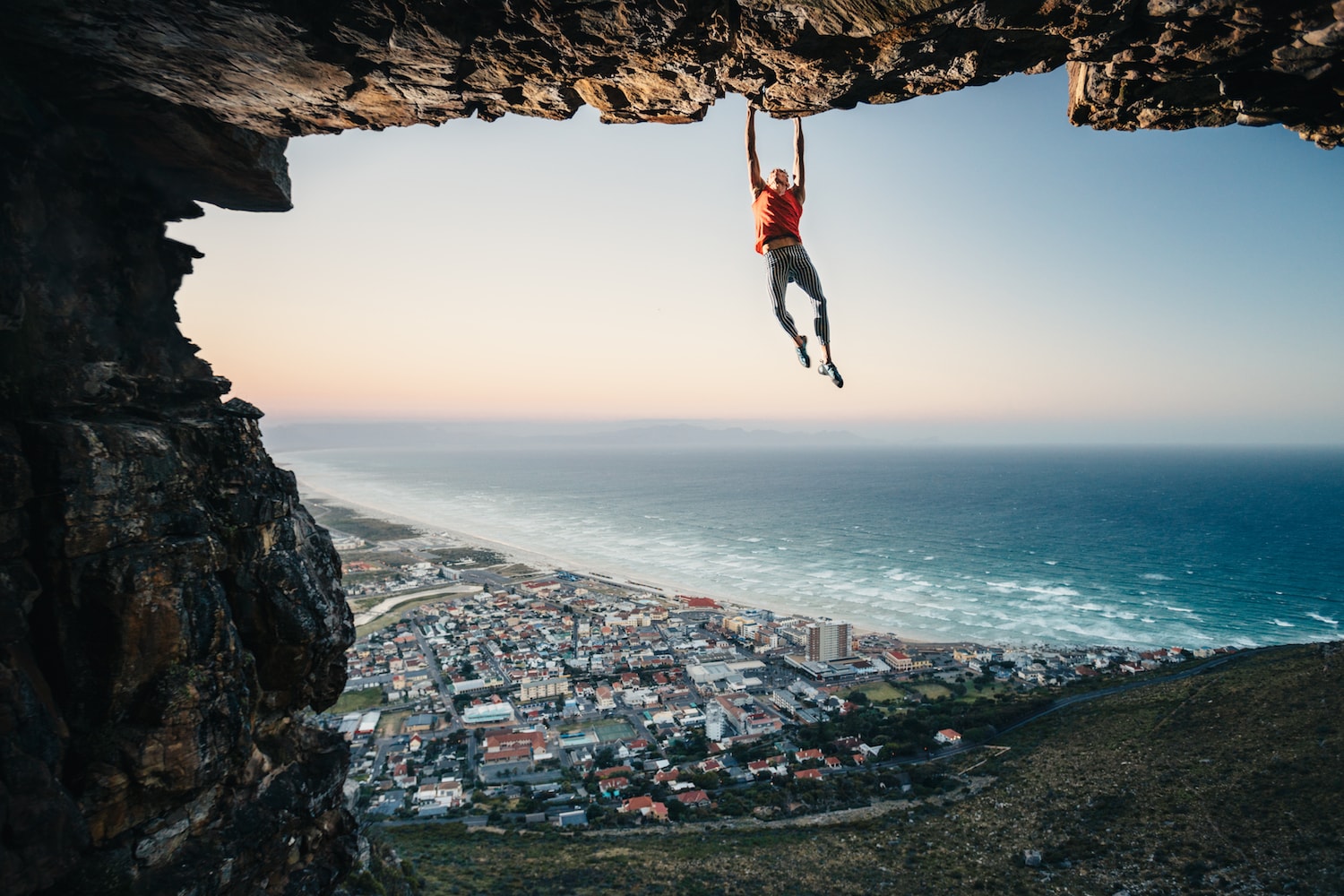 From completely ropeless one-armed dangling to upside down bat hangs over the edge of cliffs, South African free soloist, Matt Bush, has pursued a path in climbing that few others dare to explore.

With an extensive repertoire of free solo ascents up to 5.13d, Matt’s unique soloing ability—captured in captivating photos and video footage—has grasped the attention of climbers and non-climbers alike.

In this interview, Matt offers insight into his early climbing inspirations, his relationship with free soloing, and what he considers to be the greatest danger of all.

… But first, watch this:

Tell us about your journey as a climber and what inspired you to begin free soloing.

When I was 4 years old my dad took me climbing on the slopes of Table Mountain, where I can remember having a lot of fun.

I discovered rock climbing years later in high school at the age of 17, when a friend invited me to go climbing on Table Mountain. I remember standing before the rock face wondering if I could make it to the top and, well, I gave it my best shot and succeeded. It was an incredible feeling and a whole world opened up for me that day. I knew I would be climbing for the rest of my life.

After pursuing climbing for about 10 years, my curiosity grew to explore heights without ropes or safety gear. I lived on a farm and didn’t always have a climbing partner. I watched in amazement at the baboons scaling the sheer rock faces without fear. I started imagining that I could do the same and that’s really where it began …

My journey to soloing has been a natural progression. I practice all forms of climbing but free soloing is the ultimate challenge.

Matt discusses his journey towards achieving one of his hardest free solos:

Did you have any mentors/heroes that influenced you early on?

When I started climbing, I watched many climbing videos and films. Chris Sharma and Dave Graham really inspired me with their different and unique climbing styles and I learned a lot from their approaches to climbing. I’ve also climbed with Fred Nicole and learned from his climbing style. Alex Honnold is another inspiration. His first big solo of Moonlight Buttress (5.12d) in Zion motivated me and influenced my thinking in a big way.

How often do you climb on ropes vs. solo routes?

I free solo about 80% at the moment, but I enjoy all forms of climbing. There are definitely phases where I focus more on soloing because it’s the ultimate challenge—the simplicity and purity really appeal to me. But my focus changes with my feelings and motivation. Sometimes I am really inspired by a beautiful boulder or a sport climb. Do you rehearse all the routes you solo on a rope first?

No. Where the climb is really challenging and the margins for error are small, I use a rope to train for the ascent. But I enjoy onsight soloing, too. It’s a beautiful style of climbing and one of my favorites.

How do you know when you’re prepared? Do you have a mental checklist or pre-soloing routine that helps you know you’re ready?

I follow a logical process to prepare for a challenging solo ascent. There is a physical and mental process, but it’s also important for me to be in the right spirit for soloing and to feel free within myself. I prepare until it feels right. There’s no exact formula or length of time for this. Every route is unique and follows a similar but different process.

Do you feel pressure to solo when a photographer joins you?

I listen to my feelings. If there is pressure then I am not in the right spirit for free soloing. I reason with myself that

there’s no point to free solo when it’s not free.

I have walked away from a solo climb before but not because of pressure from the photographers. I just didn’t feel right. The external conditions were not right: the temperature was very hot, the rock was warm, and the grip was not good. So, I spoke directly to the crew and rescheduled. It’s important that I listen to my feelings; ultimately the decision to free solo rests with me.

Have you had any close calls or moments where fear set in?

I have experienced gale force winds, rock breakage, rain, raptor attacks, and snakes while on-route. Fear and adrenaline rushed through my body, but this enabled me to respond immediately to the situation. This type of fear is protective and adaptive.

I have also experienced another type of fear … the most dangerous type because it exists only in the mind. I was soloing and I had the thought that the rock was loose and could come down at any moment. This triggered the emotion of fear in my body and I became stuck on the wall. For a moment, the fear immobilized me … but then I realized it was all in my mind. I took a breath and commanded myself to relax and climb on. What strategies do you use to minimize fear?

Tell us about your most memorable free solo.

Recently, I soloed an overhang overlooking the ocean called Dancing in the Ceiling. It’s not the most technically difficult climb I have achieved, but it was one of the most memorable. I set my sights on achieving a one-armed hang right on the edge of the roof. When I achieved it, it felt like I was floating on clouds. Do you think you’ll solo for the rest of your life?

What advice do you have for other climbers interested in soloing?

I prefer not to give advice for free soloing. For me, it’s a personal pursuit with no set recipe or formula. I do not encourage others to solo because it’s complex and individualized. I don’t want to put myself in the position of being responsible for others’ actions.

What do you hope to inspire with your photos and videos?

My aim is to motivate and inspire people to live their dreams. Dreams are real things but it takes courage, belief, hard work, and determination to achieve them. I believe that fear is one of the most destructive of all human emotions; it is the greatest danger. I’ve seen fear immobilize people and stop them from achieving results. Fear can also kill. It can kill dreams but can also shut the body down. It’s important to face one’s fears and learn to control them.

One of the most fascinating facts about fear is that 99% of all human fear is imaginary or irrational. A child learns to fear the same things a parent fears, so I reason if you learn to fear, then you can learn to have faith.

This really is what free soloing is for me; facing my fears and finding my freedom.

It’s possible to think faithfully and expect positive outcomes for one’s life. It takes some practice and it can be hard work at first, but faithful thinking really changes the whole picture.

Many people ask me, “Do you have a death wish or do you free solo for adrenaline or fame?” But this is not the case. I solo for the beauty of nature and the feeling of free movement. Free soloing, for me, is an art form and a way a life.