We have to get out of here!

I could barely hear Mayan as she shouted across the small channel. The wind and waves from the Tasman Sea began to swell and crash through the narrow strait slapping against the 12-foot base of the Totem Pole. The sea stack slightly shook with each hit, threatening to topple the 213-foot spire into the now raging water—with me attached.

I’d just swung across on a fixed rope to the base and placed my first piece of gear on Deep Play (5.12b) when Mayan shouted that a storm was on its way. It was our third time up the Totem Pole, and we hoped that the weather would hold. Shielded by the rock I peaked around the corner and saw swells of water from the sea and sky headed toward Mayan Smith-Gobat and myself. 6 weeks earlier I sat in Grand Junction, CO watching the arrow on my PC glide around the outlined image of the Totem Pole. Located on the outskirts of the Tasmanian Coast near Cape Huay, the Totem Pole juts 213-feet out of the sea, surrounded by cliffs on both sides, creating a funnel for the elements. The Dolerite sea stack offers any climber a chance to find true adventure in an exotic environment, surrounded by all sorts of creatures; including whales, dolphins, sea lions, and of course—jellyfish.

Pioneers of the outdoor world, such as Paul Pritchard, tested themselves on the Totem Pole, establishing new lines throughout the 1990’s. Even though Pritchard was experienced and one of Britain’s leading climbers in the 1980s and 1990s, on February 13th, 1998 he was hit by a falling boulder while climbing the Totem Pole—causing loss of feeling and movement on the entire right side of his body.

Related: The Inherent Risks of Climbing

That didn’t deter the imagination and creativity of other climbers, including Lynn Hill who attempted an onsight of the free route, but was stymied by a broken hold. It wouldn’t be until Monique Forester visited the Tote in 2003, and onsighted the sea stack via Deep Play. That became my goal: onsight Deep Play.

Photo by Will Ockenden

I let out an audible “boom” causing odd looks and giggles from my students for the day. I was working as a substitute teacher in Grand Junction, and even though the kids knew me well enough by now not to ask questions, they still shook their heads and laughed when I forgot that I was in a classroom and daydreaming of far away lands.

Where are you headed to next Mr. R?

Australia to climb some sea stacks!

I said without thought. I glanced up to see one of my climbing students and immediately was embarrassed that I’d been caught; I was supposed to be looking up reaction rates for chemistry.

I sat with renowned climber and stone cold crusher Mayan Smith-Gobat, and world-class photographer Andrew Burr on a plane to Tasmania in December of 2013. Mayan and I had just finished a small tour of Australia’s Grampians National Park, and now shifted focus to climbing as many sea stacks as we could. Weather was supposed to be descent, but the stone is situated on a latitude that changes quickly. Getting stuck in a rainstorm was more probable than not.

Related: What to Do When Weather Sucks on a Climbing Trip

We trekked to the edge of the world early in the morning for the Totem Pole; our bags laden with heavy loads of static rope, camera equipment, and climbing gear. The trail is well carved into a landscape of rolling hills and sea cliffs and even equipped with sand stone steps. Two hours of hiking and 1,275 stone steps (I counted) we stood on a ridge above the Totem Pole and stared down the narrow channel. We watched from above as jelly fish and seals drifted lazily through the water below, but my gaze fell upon the Tote. My fingers pulsed in anticipation.

Do you want the first or second pitch?

I want the first … it seems like shenanigans and that is right up my alley.

We scrambled down to a simple rappel station and threw our first length of static rope into the chasm. Locked and loaded, Mayan zipped down the line quickly to a small stone platform 250 feet below. A few minutes later powered by the intensity of our environment I joined her at the bottom of the line bursting with energy.

How do we do this?

I asked bouncing up and down.

The guide book says that you either stay tied into the static line and swing across the gap to the base of the Tote, or risk racing across the small land bridge 15 feet below us,

Mayan said with a smile.

I watched as the kelp-covered land bridge, 10 feet below, was constantly being hammered by the sea. It looked like a meat grinder just waiting to take my legs and break them like toothpicks. I thought about the sensation of jumping and sailing to the base of the Tote. Meanwhile, images of Indiana Jones flashed my imagination.

The first two jumps to gain the base of the Tote were misguided. I slipped on sea soaked rock, which sent me crashing in the back-wall.

I mused kicking off the wall. My hand slapped the base of a larger flat piece of Dolerite rock and stayed the crystals bite into my fingertips. I quickly clipped into a bolt and untied from the fixed line.

It was tricky climbing. Each foot placement and hand position threatened to slip due to the plumes of sea spray that erupted when waves slammed into the wall. Each movement sent me farther from my last piece of protection, which was normal, until I realized that even though I was 15 feet above the sea, my last piece was so far below that if I fell I would plunge into the icy water.

Unfortunately, I was still 15 feet from the next bolt. I crammed my fingers into a constriction in the rock and twisted them until they jammed. I had only one piece of traditional gear on me, which made my placement have to count. It didn’t. I wedged the small Camalot into a marginal position and watched it rattle to the base of the crack. With a small sigh I continued up the route hoping to clip the bolt.

Two more body lengths allowed me to properly protect myself from a fall, and eventually I pulled onto the belay ledge.

This is kind of scary!

Mayan yelled, the wind carrying her voice at a startling speed.

She had just pulled herself over the to the base of the Totem Pole and began to navigate the first pitch when the weather shifted and a small drizzle of rain hit my cheek. I glanced out and saw a roaming shower travel over the horizon.

Take your time, but just so you know it may rain on us.

Mayan nodded and climbed with subtlety, grace, and efficiency and quickly stood next to me on a large ledge. The small drizzle had stopped, but I was ready to get out of the elements.

Without hesitation, Mayan pulled onto the second pitch of Deep Play. Her small frame looked like it was about to blow off of the vertical rock; each gust shifted her balance making her compensate and pull a little harder than normal.

Placing fingertips and toes on small crystals and horizontal edges, Mayan completed each technical section to gain a large horizontal break. She paused and tried to shake the pooling blood in her forearm out.  She was a little pumped.

My god the wind is intense up here! I almost fell from it. It keeps throwing me off balance,

After 5 minutes, she gave her arms a final shake and smoothly polished off the last 30 feet of climbing. We had on-sighted the route, and neither one of us had fallen as we sat at the final set of anchors on top of the Totem Pole. Mayan and I made the trek back and repeated the Totem Pole three more times. On the second repeat attempt, we were caught in a massive storm and had to retreat. We ascended the 200 plus feet up the fixed line, bombarded by freezing rain.

The Totem Pole is as fragile as it is iconic. This piece of history will some day topple into the ocean due to its precarious nature. The wind and the sea will continue carving that ever-narrowing base, and in an estimated hundred years, the sea stack will rest at the bottom of the channel, quiet and peaceful. 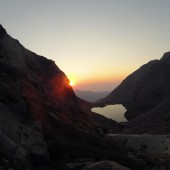