What’s in Your Pack? Big Walls and Projecting with Babsi Zangerl Named “Adventurer of the Year” by National Geographic, Barbara Zangerl is one of the most accomplished and inspiring European female rock climbers. Affectionately known as Babsi, Zangerl has collected an impressive selection of ascents including first female ascents on El Capitan’s El Nino (5.13c/8a+), Zodiac (5.7), and Magic Mushroom (5.14a/8b+) in Yosemite Valley, California. She also recently posted her first 9a (5.14d) sport route, Speed Integral, and the first female ascent of Odysee (5.13c/8a+), the hardest free climb on the Eiger in Switzerland. With such a large variety of climbing successes, we were thrilled when Zangerl offered to share how she suits up with rock climbing gear when getting ready for her projects.

Hi Barbara, welcome to Moja Gear. You have recorded an impressive collection of climbing achievements across very different climbing locations, rock styles and climbing styles ranging from big wall to trad climbing and sport routes.  Which type of climbing do you get most excited about training for?

I love big wall climbing the most because this style of climbing offers the greatest adventure.

When preparing for these different rock climbing styles, do you select different climbing equipment? For sport climbing, I love the purple Nitron quickdraws. They are heavier, but also easier to grab if you have to figure out a boulder sequence on a single pitch. When I work on a sport climbing route, I put the draws on it and leave them up there for the whole day until I am finished: the Nitron is perfect for this use and I also really like the full key lock draw for snag-free clipping. When belaying on big walls, I only use the ATC-pilot from Black Diamond because I can give a really soft belay on loooong runouts. In my opinion, you need a soft belay on alpine routes and this is the best device for providing a soft belay. For belaying on sport climbing routes, I belay with Grigri because it gives me more confidence that even if somebody takes a long time on a route they are secure. Sometimes I belay with the Black Diamond ATC pilot. The ATC Pilot is similar to the Grigri in that they both provide assisted braking. But the ATC Pilot doesn’t lock completely. The advantage of the pilot is that you can give rope really fast. You recently joined the Vibram Team so naturally, we want to hear about your climbing shoes. What shoes do you choose for climbing big walls, and which ones do you prefer for trad and sport climbing? The stunning ascent of Magic Mushroom on El Capitan has been just one of the climbing feats that led you to be named “Adventurer of the Year” by National Geographic: it must have been a demanding ascent, spending 13 days in the middle of December on this iconic big wall. How were you equipped for the nights on the wall?

We worked on the route for about 30 days (we also had to clean a lot of the pitches on the first part of the wall). There was definitely a lot of effort needed to climb MM [Magic Mushroom (5.13c/8a+)], but then a big dream came true! I have never invested so much energy into a big wall climb before. It took 11 days for the final push to reach the top and free all the pitches. It was a big fight to climb that line … a real adventure!!

Yes, it was December, and the nights were quite cold. We slept on a Black Diamond Cliff Cabana Double Portaledge in our warm Inferno sleeping bags from The North Face, and we also had the Thermarest Z lite Regular to sleep on. During the nights we secured ourselves to the anchor with a Daisy-Chain attached out our Black Diamond Solution harnesses. Thanks Barbara! Read more about Barbara Zangerl in her National Geographic article and on her official website! 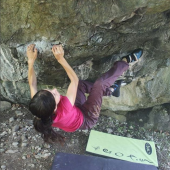 I'm a mom and a climber with the passion for travelling and writing; heelhooking, playing with princesses and laughing are essential for a 5 stars day. I can't stand Mondays, technical slabs and post offices' queues.