Never have I imagined myself sipping a beer while watching the sunrise, saying “this Thanksgiving I’m thankful we didn’t die just now.” But life is an unpredictable thing. Thanksgiving 2017. My husband Serg and I decided to drive down to Red Rock Canyon, Nevada for the first time. We left our dog Hoobie with a sitter in Las Vegas and headed to the crags. I wasn’t much into trad then, so we spent a few days climbing multi-pitch sport routes. Things were going great, I sent my first 5.11s. The approaches were a bit long and confusing, but we really liked the area — lots of climbs, good well-bolted sandstone, single and multi-pitch routes. Little did we know that in a few hours we would be stranded on the wall. Alone. In the dark. After climbing for a few days, we had a pretty good idea about what to expect from the sport route ratings in the area, but since grades are commonly area-specific, we wanted to spend our last half-day gauging trad grades. We settled on trying Dark Shadows, a 5.8 10-pitch trad route (see Dark Shadows on Mountain Project) that tops out on the Mescalito formation with an option to bail after the 4th pitch. We decided on a cut-off time, packed our fleeces, headlamps, phones, some water and snacks, and started the climb. We climbed much faster than anticipated, and found ourselves at the top of pitch 4 way ahead of schedule. The climb was going well — good protection, no groups ahead of us, overall smooth sailing, so without much hesitation we decided to go all the way. The next few pitches were easygoing and we breezed through them. Close to the top, we had some doubts about the route line, but by then it was mostly 4th class scrambling rather than climbing. We topped out around 3 pm which was a reasonable time for us to descend and pick up our pup on time, but we soon discovered that getting to the top was the easy part.

We soon discovered that getting to the top was the easy part.

When we started the climb, we knew the easiest way down was to rappel down Cat in the Hat, (see Cat in the Hat on Mountain Project) a 5.7 classic on the other side of the Mescalito formation and according to Mountain Project the “most popular multi-pitch route in Red Rocks.” With a description like that, it was easy to assume the route would be simple to find. But we all know what happens when we ass-u-me. In an effort to avoid bringing the whole guidebook, Serg had taken a few pictures of the route description before we started climbing. It seemed efficient at the time, but at the top, after dissecting the images and descriptions, we were no closer to finding the top anchor. After what seemed like an eternity, we finally found a two-bolt anchor. Relieved, we began the descent with newly found optimism. One rappel, two rappel — everything is on track. We end up at a tree with some slings. What we see matches what we read on our tiny phone screen. This is where the descent calls for 140 feet of exposed 3rd, 4th, and 5th class scrambling. It looks doable, we begin the way down, but something seems odd. The face is pretty wide … do we scramble more left or right? Why doesn’t the description mention this? Are these trees in the photos?

do we scramble more left or right? Why doesn’t the description mention this? Are these trees in the photos? Sergey and Alena begining their descent in Red Rock, Nevada

We go down as far as we can before coming to a steep drop, and the trees on the ground are still looking like children’s toys. We sling the rope around a decent pine tree, and I rappel down to look for the bolts we assume should be there. I swing right and left, up and down…and see nothing. I pull myself back up, Serg goes down to see if I missed anything while I scramble around hoping we missed the obvious route line.

Neither of us finds anything, and as we stand at an ambiguous outcropping watching the glittering lights of Las Vegas shimmer in the distance, the sun’s final rays disappear below the horizon. It isn’t completely dark yet, we have our headlamps, gear, and rope. Serg’s phone battery is half-full, mine is at about 10%.

We still have water and a couple of protein bars. It’s late November, but the weather is good, and we are wearing comfortable TC Pros (buy the TC Pros here). We have our fleece jackets, helmet liners, and a small backpack. Overall things don’t seem too grim. But as we continue to look for a descent, things start looking worse. We think we may have headed too much to the left, so we simul-climb a couple of traverses with two pieces between us at all times.

It becomes increasingly obvious that with our headlamps dropping dancing shadows on the uneven rock faces it will soon be impossible to find any bolts. As we move and contemplate our plan, we come across a two-sling bail station. It’s very encouraging, and we jump at the chance to rappel. We find the next station, this gets us a couple of ropes closer to the ground and we think this is the home stretch, but then…there is nothing. I prussic my way back up.

We consider our options. By this time no one is around. We do not have service, and it’s Sunday night of the long weekend, which means it’s unlikely anyone will be climbing here tomorrow. We assess the location. It is possible to sleep on the shelf-ish slab we are on, but Serg is wearing his one-day contacts and will likely be blind without them the next day. We also see a good amount of shrubbery around, which is encouraging for making our own bail stations. So we decide to push on. climbing in the dark in Red Rock, Nevada

The rest of the night consists of iffy rappels off of small shrubs and rocks using a cordelette we cut into 9 pieces and tied together with double fisherman’s knots. Each knot uses the absolute minimum amount of cordelette possible. We also leave behind two slings and one nut. Twice we rappel only to prussic back up.

One rappel leaves the rope stuck in a crack and Serg climbs back up, releases, re-directs, and descends again before we are finally able to pull the rope. This little number costs us close to two hours on a hanging belay built from two nuts and a cam. By this time we have been on the wall for nearly 20 hours. A few times during this ordeal I fall asleep for seconds at a time. We are both exhausted and dehydrated.

The first few times Serge loads the rope and the tiny cordelette anchor moves to adjust its positioning, the crackling sound of rope against rock terrifies me to a point of nausea. I reflexively grab the rope a couple of times, but eventually, I become more tired than scared. Twenty-two hours after initially putting our hands on Mescalito, we make it down to the ground.

I cannot describe the relief I felt at that moment. All my problems seemed miniscule in comparison. Exhaustion, thirst, fear cleared my mind like no meditation ever had. We stumble across bushes and boulders to the start of Dark Shadows to our lonely backpacks, chug some water and begin to waddle to the car. Our green beast of a van stands alone but proud in the parking lot, waiting patiently. We open two beers, count the last of our lucky stars in the early rose sunrise sky, start up the van, and head out in silence.

So what are the takeaways? 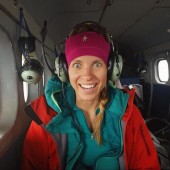