Climber Confessional: Hanging by a Thread and Thankful to be Alive We were in the heart of COVID and our local climbing organization (Bishop Area Climbing Coalition) has asked us to refrain from climbing the most popular areas. Los Angeles Department of Water & Power has closed off access to the World Class high ball area of the Buttermilks and the road to renowned winter sport climbing in Owen’s River Gorge. Cleaning up loose dirt/rock above. Welcome to Nightvale Area.

This was the perfect time to get into route development. Route Development is typically safer to do alone while trundling microwave sized blocks, throwing dirt over the side of a cliff, and creating new fixed anchors / protection. I had been developing a cliff near Mammoth Lakes, CA that had never seen route development before. There was choss but also some good climbs once all the loose stuff was removed from around the routes. My typical route development setup is on rappel with a prussic holding me in place so I can work hands-free.

This day was probably my 12th time out at the cliff and my third day working on a new 30m trad line. I spent a good 30-min evaluating and setting up the top rope anchor the first time and was too tired to check the anchor the second time out. Reenactment of the chockston anchor. It runs over no visible sharp edges.

I started the day like any other, jugging up my fixed line to work the route. I could feel the typically ‘see-saw’ stretching created when jugging on a dynamic rope. This motion can cause a sawing motion in ropes. I tried to minimize the stretching and I “thought” I had backed up the webbing anchor around a chockstone with an accessory cord (I hadn’t) to mitigate any abrasion issues. After I had gotten 28m (~90 ft) up the fixed line I noticed the rope was further into the crack than I remember setting up the anchor. Looking up at the rope I was jugging… Shit.

Finally, at the top of the crack, I peered over the cliff top and didn’t see my rope leading to where the anchor had been set up. I inspected the rope again and saw that my anchor blew! The rope I had been jugging upon had fallen 10 ft and wedged the fixed anchor point (a figure-8 on a bight) into the very top of a crack at the top of the cliff. Close up of the fixed rope (re-enactment).

Pushing the fear-response down, knowing that this ‘knot anchor’ could blow at any moment, I focused on problem-solving. I walked mentally through the easy free solo mantle I would have to do, detach from my ascenders, and pulled over the lip. I was safe on a ledge, I could walk off if I wanted, so I inspected the anchor. Continually reminding myself that I was not safe, (I was not connected to any anchor) so I didn’t complacently fall into the familiar route development flow of leaning into my always attached rope. Inspecting the webbing on the blown chockstone anchor, I found my webbing with light abrasion in several places a catastrophic cut through the webbing right at the water knot. The rap ring was laying in front of me on the ledge. What I saw of my anchor after the free-solo mantle.

I became extra-cautious after this near miss. After drilling my top anchor I really had to work with myself to trust this non-backed up, untested, bolted anchor to rap back down. Eventually, with some built up courage, I descended and called it a day. My nerves were pretty active and I didn’t want to introduce ‘stress injury’ or ‘climbing PTSD’ by not doing anything about the trauma and locking it in. Learn more about stress injury from these great podcasts by The Sharp End (Ep. 34 and Ep. 35) or this article I wrote on my own recovery from stress injury. The final anchor setup when I returned.

Note: When I went back to the cliff to take these pictures, I found it pretty hard to wedge my rope in a spot where it would stick under high load. This just reiterates HOW lucky I was that this rope caught in just the right place instead of blowing and dropping me to the ground.

Climber Confessional – What I learned

In reflection, I realized a number of things I should have done to be safer:

I should have used a static line

Static lines should typically be used for fixed lines because not only is jugging easier but you can avoid the ‘sawing motion’ of jugging on a dynamic line that stretches. Note: I’ve jugged dynamic lines before in Yosemite without issue, but this rock was much different in hazards comparing Yosemite polished granite vs. unclimbed sharp volcanic.

I should have backed up my anchor

As with anything, we should do tasks the same way every time. I was out with a friend when I established this natural anchor off a chockstone and fixed my line. Looking back into memory, I took a short cut because I felt I was being over-cautious with a more redundant anchor with both webbing and chord.

I should have inspected my fixed line that second time, especially with the extra risk of using a dynamic rope.

When I returned to the cliff to take pictures, it was hard to get a figure eight to wedge in the crack. This is a new realization that a figure-9 or other larger knots can add additional safety if your anchor blows (however unlikely that scenario). In addition to these knots typically being easier to untie after load. In conclusion, I was lucky. I could have taken anywhere from a 1m to a 30m fall due to the blown anchor. The injuries would have been severe. If the anchor fully blew I could have died, broken my spine, or something else severe. I still feel like doing route development alone is acceptable management of the risks, but clearly, I need to do better, build more redundancy, and take more time. Avoid getting complacent and always do things the same way, especially when alone and working in an untested area.

Brice is based out of the mountain town of Mammoth Lakes, CA in the Eastern Sierra. He has spent much time in the mountains and climbed all over the world. He regularly writes about his adventures at bricepollock.com. 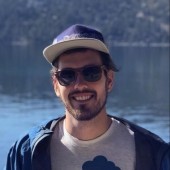