Seneca Rocks, WV is one of the premier climbing spots in the Mid-Atlantic region. Known for its notoriously sandbagged multi-pitch routes, this is where DC folk come to practice big wall skills.

On the morning of our last day here, my partner and I decided to climb Thais; a 4-pitch 5.6 that goes to the top of the summit. Upon summiting—while we were enjoying the view from this thin blade of rock—we were contemplating how we were going to get down.

What I had in mind was to scramble along the summit to a series of slinged trees and rappel anchors that would take us to the bottom; however, near the summit, we saw a pair of rappel anchors, commonly known as the Pleasant Overhangs rappel. This rappel is not well described in the guidebooks or online, and though I knew of it, my memory was hazy about whether it was a mandatory double rope rappel or a recommended double rope rappel. Being that we were supposed to be back in DC that evening and we didn’t see any easier ways down, we decided to attempt this rappel because obviously rap rings would lead us to the bottom.

Halfway down my rope, I reach the lip of the overhang. Looking down I can clearly see the ends of my rope dangling in free space, nowhere near the wall or any obvious anchor. As the situation started to dawn on me, I hear a nearby climber yell out,

Are you on one rope or two?

I tell him I’m on one and he reaffirms that this rappel is a double rope rappel. He also asks if I have knots on the ends of my rope (which I did). When your partner is stuck on rappel, the only thing you can really do is take pictures of them. Photo: Jenny He

At this point, I’m thinking about how I can get myself out of this situation. I had learned self-rescue at the gym but it has been a while since I’ve had to use any of those techniques. I take out my cordelette and make a prusik and foot stirrup, and to the amusement of the nearby climbers, I try to ascend my rope. To my dismay, the brake strand is too heavy to take up slack and the only other material I have for a second prusik is Dyneema slings, which don’t bite into the rope like I hoped. At this point, the other climber lets me know that when he gets to the summit he can help me get off the cliff.

I’m not sure how long I was up there for, but being stuck in a free hanging rappel is not an ideal situation. There’s not a lot for me to do but dangle, enjoy the view, and think about how ready I am to be off the wall (or how my legs are falling asleep).

Then it hits me, I can switch my Reverso

into guide-mode and ascend that way. It actually works and I finally start ascending back up the wall! Not too much later I see the other climbers at the summit working their way to my rappel anchor, so I stop ascending because I’m going to be heading down soon anyway. Those guys help me off the wall then set up a rappel for my partner. Once we get on the ground the climbers stayed on the rock to continue climbing, and we head out only a few hours later than planned.

Every time I reach the ground after a long day on the wall feels like a big relief. This time the idea that I could have potentially been stuck up there overnight weighed heavily on my mind. It was a pretty dumb mistake, but I left with only a hurt ego. At the end of the day, a mistake that you can walk away from is one to find value in and learn from. I got super lucky that there happened to be a group climbing near us on a Tuesday afternoon and can’t thank them enough for helping us out.

Now it’s on to the next adventure and I think I’ve learned my lesson. At least now I can’t forget how to ascend my line.

Big thanks to Matthew for helping us get out off the Pleasant Overhangs.

Our 40+ most popular articles ever
Today’s Best Rock Climbing Gear Deals
200+ rock climbing videos
Essay: Will You Be My Trad Guru?: The Importance of Apprenticeship in the Gym Climbing Era
3 Friction Hitches Every Climber Should Know — How to Use and Tie an Auto-Block, Prusik, and Klemheist
Climber Confessional: On Listening to Your Gut and Your Child
Strategies for Safer Rappeling
“I Will Climb, Too” — A Story on Mentorship and Responsible Climbing
Climber Confessional: A Learning Experience in How Not to Use a GriGri
Nursery Rhymes, Biomechanics, and Bad Attitudes — Why I Stopped Climbing
How to Build Your First Trad Rack
Gear You Ought to Know: A Review of Sterling Rope’s Hollow Block
Get daily updates by Liking us on Facebook
Free rock climbing PDFs on technique, training, knots, and more 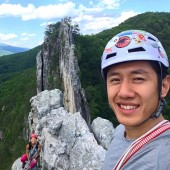 Hey! I'm a DC area climber who loves to explore the world. Whether its climbing, hiking, or just visiting new places, I'm always looking to get outside.