The County of Donegal in the northwest corner of the Republic of Ireland contains more climbable rock than the rest of Ireland combined, boasting two major Irish mountain ranges, over a thousand kilometers of coastline, one hundred sea stacks and as many diverse climbing mediums and locations as you will find in the rest of the country.

Currently, there are just over 3,000 rock climbs recorded throughout the length and breadth of the county. These climbs include Ireland’s longest rock climb, Ireland’s largest mountain crag, Ireland’s longest ice climb, Ireland’s highest sea stack, as well as many more standard single and multi-pitch venues above the sea, by the road, on the islands, and in the mountains. County Donegal currently plays host to several lifetimes of world-class rock climbing in some of the most beautiful, remote and unspoiled locations in Ireland.

The entirety of the climbing in the County of Donegal is trad climbing, though the vast diversity in rock and settings make it a place where you can find the style that interests you most. Easily the best time of year is the spring and summer months, from April until September, but this is no guarantee of perfect or even good climbing weather.

The west coast of Ireland is prone to very unpredictable weather conditions, which usually involves rain of some type. There are many types of rain and all of them are wet … The key to climbing success is to use the online weather forecasts and rain radars to plan the best places to visit on any given day based on what the weather and sea are doing.

Many of the best cliffs and climbing in the county are on tidal sea cliffs, so lowish tide and calm seas are always required. But do not let these weather and nautical concerns put you off from a visit, as the locations in Donegal are definitely worth the effort.

There is also a PDF guide to the winter climbing available on the rare occasions when winter conditions come to Ireland. The vast majority of climbing venues throughout the county have an even spread of grades, mainly in the 5.9 range and below. There are currently about 3,000 recorded climbs in the county with the potential for another 7,000. What this means is that with just a simple scope around you, you will discover plenty of unclimbed rock and unclimbed crags, particularly in the 5.10 and above range.

In general, the hardest climbing in the county is found on the seaward facing cliffs on Owey Island, with a good spread of climbs and grades from 5.7 to 5.14ish. These cliffs and climbs are a relatively new addition to the Donegal climbing empire with the much more established at Muckross Head and Sail Rock, which offer routes from 5.9 to 5.13 of outstanding quality climbing.

Muckross Head is a very unusual crag composed of horizontally bedded sandstone interspersed with thin bands of mudstone that have been eroded faster and have produced the characteristic overhangs that make the rock climbing here excellent. The climbing is in the main steep and strenuous and although the rock is generally excellent, the last meter for so along the top of the crag does require a wee bit of care. The grade range of the routes is from 5.3 to 5.13, with the vast majority of the routes above 5.9.

At high tide with a heavy South West sea rolling in, the platforms at the base of the crag can become submerged very quickly. If large southern seas are swamping the crag there are several further climbing venues to the west along the coast, such as Sail Rock, Malinbeg, Skelpoonagh, and the sea stacks.

What this collection of sea stack climbs now provide is a lifetimes worth of outstanding adventure climbing in some of the most beautiful, remote and atmospheric locations in Ireland. Many of these stacks live in very inaccessible locations at the bases of huge sea cliffs far from any easy access and what they require is a comprehensive understanding of the sea to ensure a safe ascent of any of these superb climbs and outstanding summits. These climbs involve so much more than standard rock climbing.

The standard British grading and star system has been used throughout Donegal and the rest of Ireland. It is definitely worth bearing in mind that a considerable percentage of routes in the county have only ever seen a single ascent. The three-star system is used with one star being a generally good route, two stars being an excellent route, and three-star noting an outstanding route for many reasons. There’s a lifetime of world-class climbs in the county, but if I was to choose five must do climbs,

Immaculate crack climbing up the middle of a perfect 80-meter high quartzite sea cliff, which forms the east facing wall of a huge scooped out southwest facing amphitheater of sea cliffs above the Atlantic Ocean. This route has been called the best route in Ireland many, many times.

A perfect granite corner on a perfect sea-battered granite sea cliff on an idyllic, uninhabited Irish island. It simply does not get much better than this.

Adventure climbing at its best with this 152-meter long ridge climb to the pinpoint summit of the 100-meter high Cnoc na Mara sea stack. Imagine descending 250-meter sea cliffs to arrive at outstandingly beautiful storm beach in the most remote and atmospheric location in Ireland. We then launch from the shore to cross the open ocean to land at the bases of towering monsters of immaculate rock. We then climb these towers of rock to arrive on pristine pinpoint summit far from anywhere in the real world—the summit of Cnoc na Mara. Standing on a pinpoint summit over 100-meters above the ocean, 500-meters from the nearest point of land and 20-kilometers from the nearest main road can easily be described as a truly spiritual experience.

Granite mountain crag climbing at its best, this 125-meter route climbs the central wall of the Bingorms in five very different pitches.

There are currently two routes up this slightly overhanging Game of Thrones-type sea cliff, with each route in the 5.12/5.13 grade range.

County Donegal is very much a rural location with vast areas of open uplands and many miles of remote uninhabited coastline. It is safe to say you will be alone at your chosen crag with only the occasional weekend visitor to even the most popular of the crags.

The main towns are Donegal, Killybegs, Ardara, Dungloe, Gweedore, and Cardonagh. They all have large supermarkets and are centrally located to many of the climbing areas. County Donegal offers a good selection of self-catering houses as well as B+Bs and hostels. Wild camping is popular and if planning to camp near a house or in a field, it’s best to ask permission locally.

Gola Island in western Donegal is the epicenter of the Donegal climbing scene with well over 200 single pitch routes from Diff to E5 on the Granite sea cliffs and inland outcrops scattered throughout the island. In the main, the rock is immaculate sea-washed granite with only some of the sheltered zawns containing sections of loose rock.

What Gola Island provides is outstanding rock climbing in a wild, remote, and truly beautiful setting. The island sits far out in County Donegal’s rain shadow, which means it is not unusual to be climbing on the island in bright sunshine and blue skies while the rest of the county is under a deluge of heavy rain.

By far the best place to stay on the island is to wild camp between the Loch and the sandy beach at the head of the huge sea inlet on the western side of the island. This campsite allows an easy 10-minute walk to all of the islands’ climbing locations and provides an outstanding place to wake up on a summer’s morning.

Pretty much all of Gola Island’s sea cliffs require calm seas to safely climb on them. If the sea is bouncing from the southwest then the Binatok Bay and the North West Zawn offer sheltered climbing. If the sea is bouncing from the west then there are the two inland crags, which both offer nontidal climbing on immaculate rock. An alternative to the climbing on Gola and which does not require the use of a ferry service or camping is Cruit Island. Cruit Island offers the same excellent sea cliff climbing (on slightly lower sea cliffs) and is not prone to the same big seas as Gola. Guidebooks and other beta

Serving as supplementary guides to the printed guidebook, are the online guides, Undiscovered Donegal and this Sea Stack Guide, which provide 28 free downloadable PDF guidebooks covering various areas across the entire county and represents the largest collection of adventure climbing routes recorded in the UK or Ireland.

Rural Donegal requires private transportation to allow you to travel around the county. There are regular bus services to Letterkenny and Donegal Town at the north and south main road entry points into the county but once you venture into the interior the public transport system almost disappears. The county is well serviced by an international airport with daily flights to and from Dublin and a weekly service to/from Glasgow.

Make sure to check where ferry travel is required. It is always best to call and arrange a crossing, as most of the ferries only run on demand and require a quick call to book. Our 40+ most popular articles ever
Today’s Best Rock Climbing Gear Deals
200+ rock climbing videos
A Tale of 10,000 Crags: Guide for How (and Where) to Climb in Spain
Climbing Destination Guide: Datca, Turkey
How to Maximize Your Time on Rock When Traveling Alone
All climbing destination guides
Free eBooks for rock climbing training, technique, and more 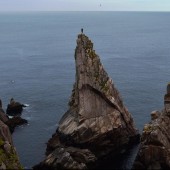 I am a rock climber, hillwalker and guidebook author, living, working and playing on the sea cliffs, sea stacks, mountain ranges and uninhabited islands of County Donegal in the Republic of Ireland.