Essay: To Suffer Well — An Ode to Grit 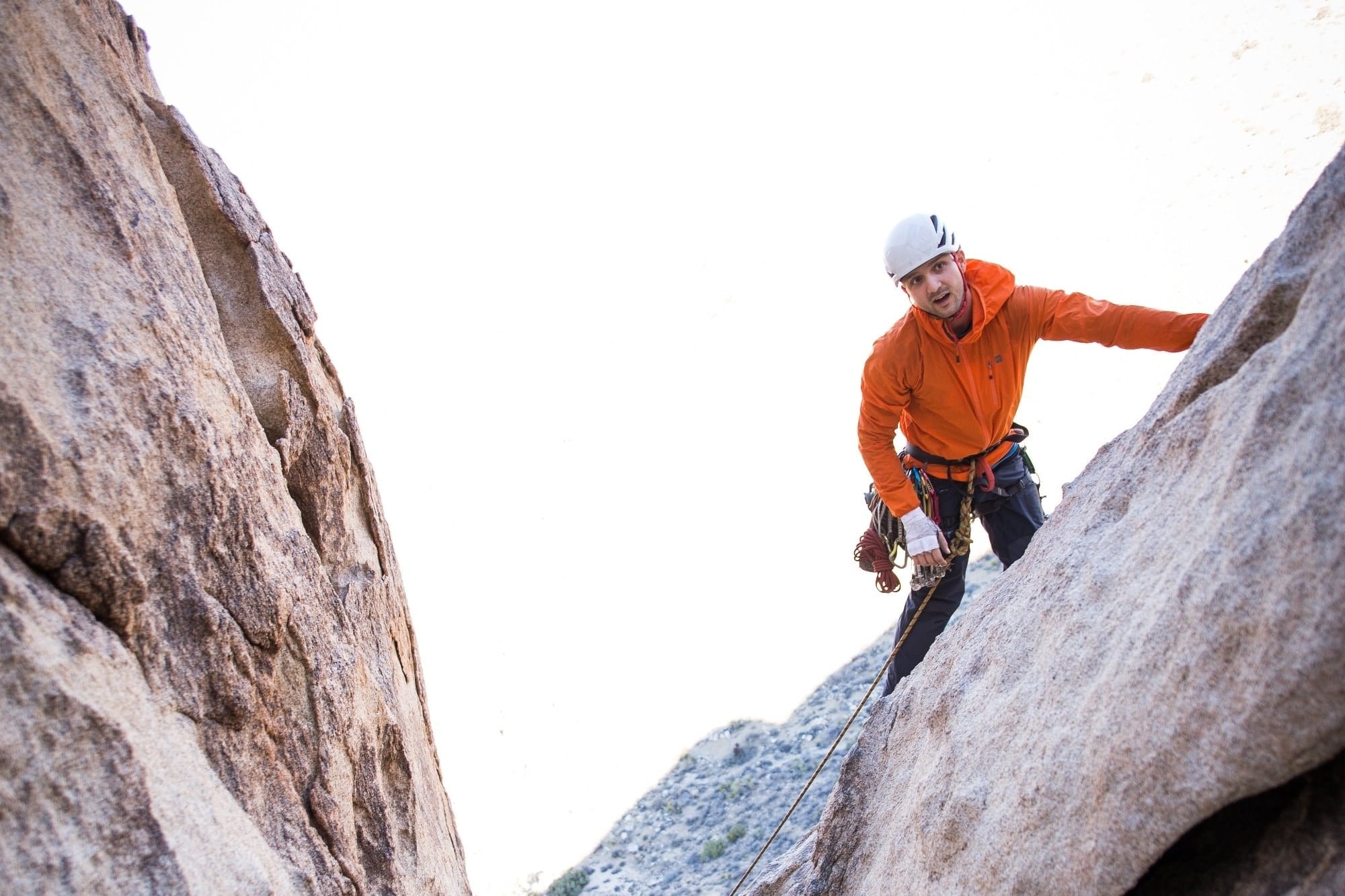 It’s as if someone has turned the water spigot on full blast at the top of the crack in which my hands are precariously jammed. They slip out, as expected, and I fall hitting my shin hard on the overhang below. I’m on top rope and the down pour is increasing. I’m not attempting to do anything especially heroic or novel, just merely trying to clean gear from a route before the lightning comes back around through the valley.

And I’m starting to get ticked off.

With my shin now bleeding, I lug myself back onto the rock, which feels like the Batmobile’s oil slick and Hagrid’s snot had a less viscous baby and decided to profligate all over the granite. Charming.

Lacking faith in any reasonable physical deference, I opt for considerable hand repositioning and cursing. Thumbs down jam. Expletive. Thumbs up jam. Expletive. I feel like I’m doing acro-yoga for the mentally insane. Under a waterfall.

Then I get the jam just right and pull up. The water rushes over my hands but the jam holds my body weight. I can eye the next cam that needs removing and smile gleefully.

This is so much damned fun.

In her highly praised book, Grit, author and professor of psychology Angela Duckworth makes the argument that success is not so much dependent on pure genius or innate talent, but on a unique combination of passion and perseverance that results in a symbiosis of fortitude, stamina, and determination. She deems this grit.

She references a favorite and oft quoted statement by Teddy Roosevelt that is especially poignant to the aforementioned foible:

“It is not the critic who counts; not the man who points out how the strong man stumbles, or where the doer of deeds could have done them better. The credit belongs to the man who is actually in the arena, whose face is marred by dust and sweat and blood; who strives valiantly; who errs, who comes short again and again …”

Type-2 fun and climbing have had a long and wonderful relationship since the first utterance of “runout,” but now, more than ever, the importance of hard experiences on the cliff must be emphasized.

Perhaps because the other day someone shared an article with me about the business pairing of Lyft and Taco Bell, and their valiant attempt to bring inebriated individuals fast food with more ease while in an on-call taxi service … I rest my case.

While doing interviews for a forthcoming article in Climbing Magazine, I was inspired by the sheer amount of folks who felt that with the rise in sport and, especially, gym climbers, there has been a loss of adventuring in the truest sense.

In thinking about this, I found myself conjuring up wild visions of cam-placement drones putting in gear ahead of you in the name of utmost safety and route moderators making you sign a waiver before you get on the rock.

Cold sweats and night terrors aside, we must recognize that climbing as a sport is not immune to the societal sway towards increasing, and seemingly endless, comfort and ease in life. But climbing, at its core, can also serve as a remedy to the ills of our modernized livestyle.

Realize at the end of the day that you’ve been sitting for 8 straight hours? Tackle two bouldering problems and call me in the morning. Binging on Netflix in the middle of a beautiful summer day? Stay on the line with me while I direct the nearest alpinist to your residence.

Climbing, and for that matter, adventure sports in general, have an implied ethic of grit within their cultures. During a recent binge of outdoor videos that help me survive the work week, I watched the father of Clare Gallagher, an ultra runner, speak about the merit in suffering well during Gallagher’s training.

Sure, anyone with enough cash to afford gear can get themselves into a sticky situation, but it is the perseverance through adversity that Duckworth mentions in her book, which is central to grit. It is not so much about the specific difficulty we face as it is our response to that adversity.

The wonderful, and often awful thing about climbing is that this perseverance has long been lauded over all else. Just think about how many times you’ve heard crag couples continuously shout, “Come on baby … come on … COME ON!” while the other uselessly flails on their project. It’s rare to encounter a partner who, while lowering their leader, says “Well you know, you definitely gave up really early and didn’t push yourself to your full potential but, like, that’s okay you know?”

I remember when I first started climbing a friend refused to lower me until I finished the climb and you know what? I went up.

In the seminal 180° South, Yvon Chouinard speaks to the camera between grunts of absurd bushwhacking up the side of a mountain to say that you could just get dropped from a helicopter on the summit but, essentially, what the hell is the use of that? I also recently saw an ad for Swedish outdoor company FjallRaven with a quote from their founder Akek Nordin, “We’ve been trekking for 50 years, and I hope we never get there.”

This, in a nutshell, describes Angela Duckworth’s notion of growth mindset. We suffer, yes, perhaps we suffer endlessly on the way to our goal, but if we were to get dropped off at the top of the summit or blasted ten years into the future with our to-do lists all checked off, we’d be worse off for it.

Climbing disallows us from such an option and, hopefully, always will.

Vietnamese Buddhist monk Thich Nhat Hanh offers a parting bit of wisdom, writing that “To suffer is not enough. We must also be in touch with the wonders of life. They are within us and all around us, everywhere, anytime.”

I love that to suffer is not enough. We must instead, I think, suffer well. Suffer with perseverance and determination and not fear getting into difficult, scary situations. And as for me? Well if I don’t get struck by lightning I might just finally learn how to crack climb.

Our 40+ most popular articles ever
Today’s Best Rock Climbing Gear Deals
200+ rock climbing videos
Essay: What a Long, Strangely Normalized Trip It’s Been—The Role of Counterculture in Climbing
“I Will Climb, Too” — A Story on Mentorship and Responsible Climbing
The Dirtbag Dream, and How it Nearly Ruined Climbing For Me
Nursery Rhymes, Biomechanics, and Bad Attitudes — Why I Stopped Climbing
The 5 Best Friends to Have at the Crag
Climbing History: Free Soloist, John Bachar
Essay: How to Climb When You’re Not Alex Honnold
Essay: A Bad Month, Or, The Broken Man’s Guide to Climbing
Will You Be My Trad Guru?: The Importance of Apprenticing in the Gym Climbing Era
Essay: Looking for a Partner, Pants Off Limits
Get daily updates by Liking us on Facebook
Free rock climbing PDFs on technique, training, knots, and more