Just a few days ago the Moja crew arrived in Lander, Wyoming, and had the great pleasure of meeting Brian and Mandy —two of the incredible people behind the International Climbers’ Festival, happening July 8 – 12.

Not only did they invite us to their belated wedding party the first time we met, but they also invited us to use their showers, kitchen, and anything we might need while we’re in Lander (we’re currently homeless campers living in the City Park for the month!).

We soon learned that last summer, this pair chose to take a different approach to the whole marriage thing. Rather than a traditional wedding ceremony, they decided to elope at the summit of the Northeast Face of Pingora Peak —in the Cirque of the Towers of Wyoming’s Wind River Range.

Before they could tie the knot though, they first had to bike 14 miles, hike another 24 miles to the base, and climb 1,200′ (Grade IV, 5.8, 9 pitches) to reach the 11,884′ summit. After an official ceremony at the top (with a wedding dress and celebratory oreo-eating session), Brian and Mandy’s immediate honeymoon involved another 24 hours of venturing back on foot and bike to reach their home in Lander. The entire journey took about 45 hours. Watch the coolest wedding you’ve ever seen.

Congrats to the both of you, we look forward to celebrating your love! 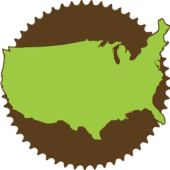