9 Reasons Why It’s Good to be a Bad Climber

A couple years ago a sub-par experience made me stop climbing. For a while, I couldn’t even listen to other people talk about going to the gym. I wanted to vigorously shake them and yell

Months later I started to rebuild my relationship with climbing, but it would be forever altered. Climbing returned to being an invigorating and athletic part of my life, but I stopped training for any trips or goals.

In a time when climbing is exploding alongside the rise of hipsters and gentrification, let’s remember that we aren’t all sculpted, sponsored athletes. I want to highlight the commoner climber who finds enjoyment at the gym every once in awhile. I want to celebrate the bad climbers.

Here are 9 reasons why it’s good to be bad:

1. I have more time to write silly songs

Since I also have compassion for you, dear reader, I recruited the talented Aurora Roth to turn the words into music. My singing skills rank even lower than my climbing ones.

Please enjoy this rewrite of Royals by Lorde that does not sound like a cat being squeezed into a chalk bag:

2. My moves have better names than yours

Sure, you can mantle, flag and crimp your way up a 5.11, but when I climb, I channel the majestic creatures of the sea. My best moves claim names such as: The Beached Whale, the Flailing Tentacle, and the Hanging Starfish. 3. I only climb with the best people

And by best, I mean people who will laugh with me while talking about shoving their foot in the crack.

Since I don’t keep a strict workout regimen or maintain a certain level of strength, I can be more picky about who I climb with. Favorite climbing buddy out of town? No worries, I’ll go running instead. Done are my days of climbing with extremely competitive people who claim it’s not a competition. Determining who brought the best snacks to the crag is the only competition I subscribe to. #bringBackSnacks

4. The value of my hangboard increased

“Oh. Yeah,” I responded, pondering the unused hangboard. “Do you want it?”

When my friend realized that I was serious, the look of pure joy on his face was worth far more than 10 hangboards. I tossed him a screwdriver to distract him with dismounting the board while I polished off the remainder of our cheese and crackers. #sharingIsHard

5. Crying on the wall is always allowed

Sometimes a route is really really hard. Sometimes I had a bad day at work. Sometimes I’m stuck in a freak high gravity warp hole caused by interstellar alignment.

My favorite people are the ones I feel safe sharing my emotions with—good or bad. If I wanted to regain my love for climbing, it needed to become a space that allowed for both giggles and tears. Honestly, I have never actually cried on the wall, but it’s the possibility that matters.

Radical practice: if something hurts, I stop.

7. I am always getting better

Summers in Alaska are too magical to spend much time inside a gym, and the closest rocks are more than an hour away (and they aren’t that great). This means that I don’t climb much over the summer. In September I show up to the gym and get better all winter long. I never get strong enough to reach that plateau of minimal gains in exchange for massive investment.

8. The routes at the gym don’t get boring

If I were a good climber, the routes in the very small gym in a very small town would get old, fast. This is especially true because all of the route setters are unpaid students. In December with finals around the corner, don’t expect any new routes until next semester.

9. Have I mentioned good snacks?

Keep your celery and carrots away from me. Snacks acceptable for sharing include fancy chocolate or a bite of your breakfast burrito. In Alaska, summer is short and winter is always coming. I aim to stay well insulated. 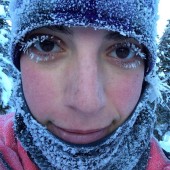