Posted by Parker May | Journal, News Nicholas Milburn, 25, sends his second 14d (9a), Algorithm in The Fins, Idaho. Milburn is the 3rd ascent following Jonathan Siegrest and Paige Claassen.

As a full-time graduate student in Computer Science at the University of Tennessee – Chattanooga, Milburn isn’t your typical climber pushing these grades. Born into a climbing family in Louisiana, Milburn recalls being a toddler “eating the dirt at the bottom of the crag” long before he was able to climb. His first climbing trip was at 6 months where he accompanied his parents to Rifle, Colorado. At 8, Milburn did his first lead climb in Reimers Ranch, Texas.

I remember crying, I was not having fun

Milburn recalls. Despite this, Milburn stuck around the climbing world. By 16 he claimed his first 5.14a (8b+) Zulu in Rifle, Colorado in just one week of work on the project. Prior to Algorithm, Milburn put down the iconic Dreamcatcher (14d/9a) in Squamish last year. Other notable ascents of his include Paint it Black (V15) and Mind Shift (V14).

Since moving from Louisiana, Milburn has started to make a name for himself. Louisiana isn’t necessarily well known for rock climbing so Milburn owes a lot of his love for climbing to his uncle, David Speyrer. Pro climber Ben Spannuth also served as a big inspiration for Milburn growing up, climbing at the same bouldering gym back home in Louisiana. Milburn and Spannuth remain friends to this day. They even worked on Algorithm together.

Idaho’s, The Fins, is notorious for tall vertical limestone and Algorithm is no exception. Despite the common theme of steep climbing around this grade, Algorithm is surprisingly bouldery with a distinct crux. At 40 meters of vertical rock, Spannuth and Milburn repeated the mantras like “Strong Toes!” and “Don’t pull harder, stand harder!” during their sessions, emphasizing the importance of the footwork required for such difficult vertical climbing. Algorithm was first sent by Jonathan Siegrist in 2013, followed by Paige Claassen in 2018. (TrainingBeta.com – How Paige Claassen trained for Algorithm) Both Siegrist and Claassen posted videos of their success that Milburn “watched countless times” in preparation. 5 of the 6 weeks Milburn spent traveling to the Fins was focused on learning to stick the bouldery crux moves. After 6 weeks of work Milburn was finally able to link the crux moves together. It was time a redpoint attempt. That very next attempt Milburn was able to clip the chains to claim the 3rd ascent. After clipping the anchor Milburn kept climbing until he summited the wall of limestone, untied his rope, and threw it to the ground indulging in his hard-earned victory. About a week after Milburn’s exceptional performance Ben Spannuth claimed the 4th ascent.

With a December graduation date on the horizon, school remains the top priority for Milburn. Yet his climbing goals remain lofty with two iconic routes on his radar, Biographie (5.15a, 9a+) and Jumbo Love (5.15b, 9b). Despite all of this, it seems Milburn’s main objective is to have fun and maintain an enormous love for climbing. Often climbers lose sight of this goal they work on pushing grades higher and workouts harder. “I definitely want to try and climb as hard as I can, but that is certainly not my only goal. I could do some more things that would make me better, like fingerboarding, but they would sacrifice my happiness. I really like climbing because it’s fun… That’s why I spend so much of my time climbing ”.

PHOTO CREDIT: Ben Crawford
(All photos from the route, Algorithm) 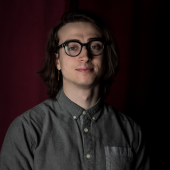 Previously a biochemist and enzymologist, I've since moved into a van and now climb and snowboard full time. I also enjoy riding motorcycles, writing, and a good ol' car-to-car alpine suffer fest