Navigating climbing lingo can be a daunting task for beginners. Use this guide to gain a foundational understanding of various climbing disciplines, organized from the least to most sophisticated style.

A very raw form of climbing, bouldering requires only shoes, chalk, and a crash pad. Typically, these problems are on boulders under twenty feet tall and the climbing tends to involve a short sequence of very powerful moves. It is sometimes useful to think of bouldering as a sprint—quick and powerful—whereas other styles can be more like marathons. In the United States, bouldering problems are graded using the V-Scale.

Relatively recent to the climbing scene is deep water soloing, which means climbing on cliffs over a deep body of water to protect against falls. Routes vary in heights, but some renowned lines measure in at 40ft or more. Shoes, a boat or kayak (for access), and a bit of chalk are all that’s necessary.

Most climbing gyms involve a combination of bouldering and top roping. Top roping means that the rope is already set up through an anchor at the top of the climb prior to the climber getting on the wall. This is the safest (and often least scary!) type of roped climbing, but using an appropriate figure 8 knot and sound belay technique is crucial. Routes are graded using the Yosemite Decimal System.

Rather than tying into a rope that is already threaded through the top anchors (top roping), sport climbing requires a leading climber who attaches quickdraws to pre-drilled bolts. As the leader continues upward, he or she clips the rope into each quickdraw along the way.

This style tends to be powerful, but also necessitates a high level of endurance. Required equipment includes a harness, helmet, belay device, carabiners, quickdraws, chalk, shoes, and a rope. As with top roping, climbing grades are organized by the Yosemite Decimal System. 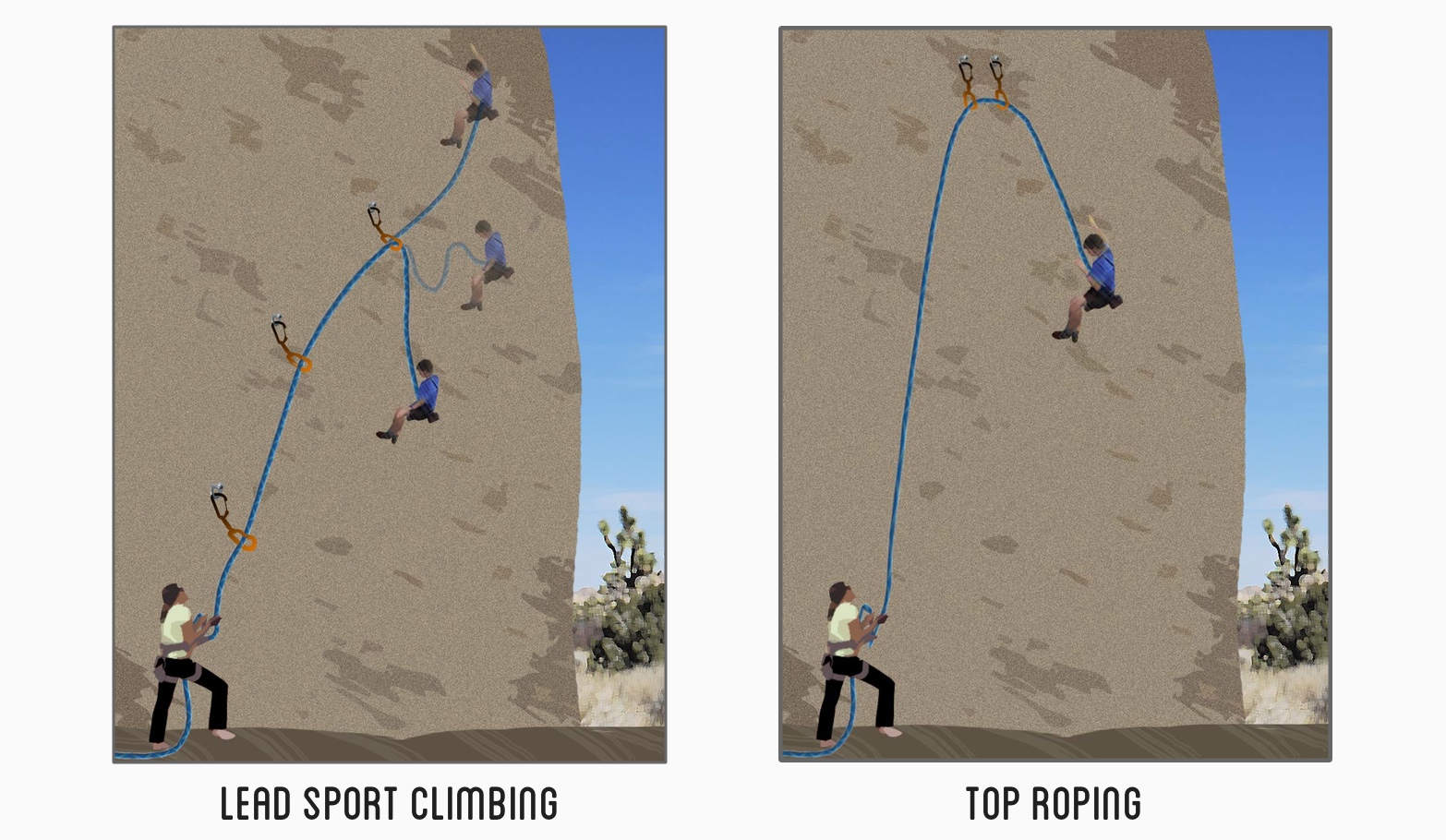 Short for traditional, trad climbing is the foundational style of climbing that began prior to the practice of drilling bolts. Thus, instead of clipping into bolts that are already established (sport climbing), trad climbing involves placing pieces of protection (often cams or nuts) into cracks in the wall. This is a sophisticated style that involves extensive amounts of gear, a keen ability to assess risk, and confidence in one’s placements. However, despite its complexities, trad climbing is considered a very pure style due to its minimal impact on the natural rock. The Yosemite Decimal System is used here as well.

Aid climbing is the most complex style of rock climbing and it involves the pulling and standing on pieces of gear to assist in ascending a route. For example, in each of the above styles the climber is free climbing (differs from free soloing below), which means ascending a climb with his or her hands and feet while using gear only to protect any falls. In aid climbing, however, the climber is using gear to physically aid in ascending the route.

Often mistakenly called free climbing, free soloing means foregoing the use of ropes, harnesses, belay devices, etc. to climb routes without any protection against a fall. Many have been exposed to free solo climbing through the success and attention of free soloist Alex Honnold.