The scoop on a climbing festival you don’t know about, but definitely should:

Part of what makes a climbing festival a spectacular one, is the through-the-grapevine means in which you find out about it. Which brings us to our first question …

Have you ever heard of the Sundance / Devil’s Tower Climbing Festival?

No? Well, neither had we until we stumbled upon this small flyer while enjoying some post-climbing beers in Lander, Wyoming:

We were intrigued immediately; because how can you not be when the words climbing + beer + Devil’s Tower appear altogether on one small piece of printed paper?

With a little bit of research, we soon discovered that the FIRST EVER Sundance / Devil’s Tower Climbing Festival (September 6-12, 2015) will be taking place in conjunction with the 2nd Annual 2015 Sundance Beer Festival; a rambunctious city-wide event that begins at High Noon on September 12th. Yes that’s right—part of your festival entry opens you up to an amazing selection of craft beers from over 23 brewers coming in from Wyoming, South Dakota, Montana, and Colorado, for your taste buds to test and enjoy.

Awesome, right? Well it gets better.

by promoting the exclusive use of passive protection (i.e. nuts, hexes, NO CAMS!) for the week-long event. No, you aren’t actually required to abide by these rules, but hey, attempting to get up some Devil’s Tower routes without your cams is an attainable and rad endeavor to go after!

Accordingly, in focusing on the use of passive trad protection, the festival will hold a film contest, wherein videos will be judged based upon artistic value, music, narration, and the best documentation of proper placement/removal of passive gear. Prizes from Patagonia will be awarded to the top 3 films!

You can also expect opportunities to get involved in an Access Fund service project, attend the Climbing Trade Fair, take part in feats of strength contests, and plenty of other fun climbing activities. For those seeking to engage in other physical feats in the outdoors, the Black Hills Runners Club will be hosting the 2015 10K and 30K Trail Run on September 12; the same day as the Sundance Beer Festival.

An interview with the organizer of the Sundance / Devil’s Tower Climbing Festival:

… So with our interest thoroughly piqued for obvious reasons, we reached out to get involved by getting touch with the festival organizer, craft beer enthusiast, and local climber, Dave Schrall. In chatting, he gave us greater insight into what we can expect from the First Annual Sundance / Devil’s Tower Climbing Festival:

What inspired the festival?

The primary reason, as mundane as it may seem, was to see if we can get more people to come to the beer festival. After last year’s first beer festival, we asked “what’s another demographic we could get to come?” It took me about 10 seconds and I said, “climbers like great beer!” And the organizers asked if I wanted to organize it and I said, “Okay!”

What aspects of Sundance and Devil’s Tower make it a desirable climbing destination?

Well, Devil’s Tower is what it is … the grade ratings aren’t sandbagged, but they are pretty stiff. If you can climb 5.10a at the Tower, you can climb .10a anywhere.

Sundance is only about 30 minutes from the Tower, which makes it an excellent base if you want any type of population base—although 1200 people isn’t much!

Sundance is also very central to Spearfish Canyon, the Needles, and Mount Rushmore. The backside of Mount Rushmore is open to climbing.

What are the top rest day activities for the area?

There are SUPERB mountain biking trails that start at the National Forest border, about 4 miles outside of Sundance, Wyoming. There is hiking in the Bear Lodge Mountains, just north of Sundance. They’re part of the Black Hills of Sundance, extending into Wyoming. Both wind surfing and stand-up paddle-boarding are available in town.

There’s also the Crook County Museum and Art Gallery—a free museum that documents the whole rancher/farmer/immigrant settling of the region, which also tells the history of “The Sundance Kid,” as Sundance is where he got his name.

In town, there’s also a coffee shop and a quite good restaurant/bar called The Longhorn, offering 20 microbrews on tap, and Bud Light. They also have really great food.

Just outside of town (about 15 minutes) is the Vore Buffalo Jump, a sinkhole that occurred due to gypsum collapsing underneath. Interestingly, Plains Indians drove buffalo over this cliff before butchering them and gathering meat. It was a big community event and important to their survival routine. Could you provide any beta for car and tent camping?

There is a huge variety of options for camping around the area, including a KOA at the entrance to Devil’s Tower.

There is also donation-based camping at Devil’s Tower Bed and Breakfast, and the owner, Frank, is a serious full-time hippy. It’s a good deal and climbers in the loop find out about it. You have to go into the park and exit on the NW side to access Frank’s place. There’s no other place like it on the planet!

The actual Devil’s Tower National Monument also has the Belle Fourche Campground with 50 campsites, available on available on a first-come first-served basis for tents and RVs up to 35′ in length. No hookups are available.

In the Black Hills National Forest, you can stay at Reuter Campground for a $10 per night, which is only 4 miles outside of Sundance, Wyoming.

There are also RV campgrounds and cabin rental options in town. A passive protection festival … Are we really expected to not use cams?!

First and foremost, be safe! If you don’t like nuts or if you’re not good with them, use what you need to be safe.

The only way to put a bolt in at Devil’s Tower is to replace an existing one, and you need a permit. So, following those traditions, the focus of the festival is passive gear.

In order to do a festival surrounding this concept though, I figured I had to make sure I could do it myself! In fact, this is similar to how I used to climb, as I used to only own two cams.

So no, you don’t have to use passive pro only— just climb safely! The focus on passive-protection is just one aspect of the festival. 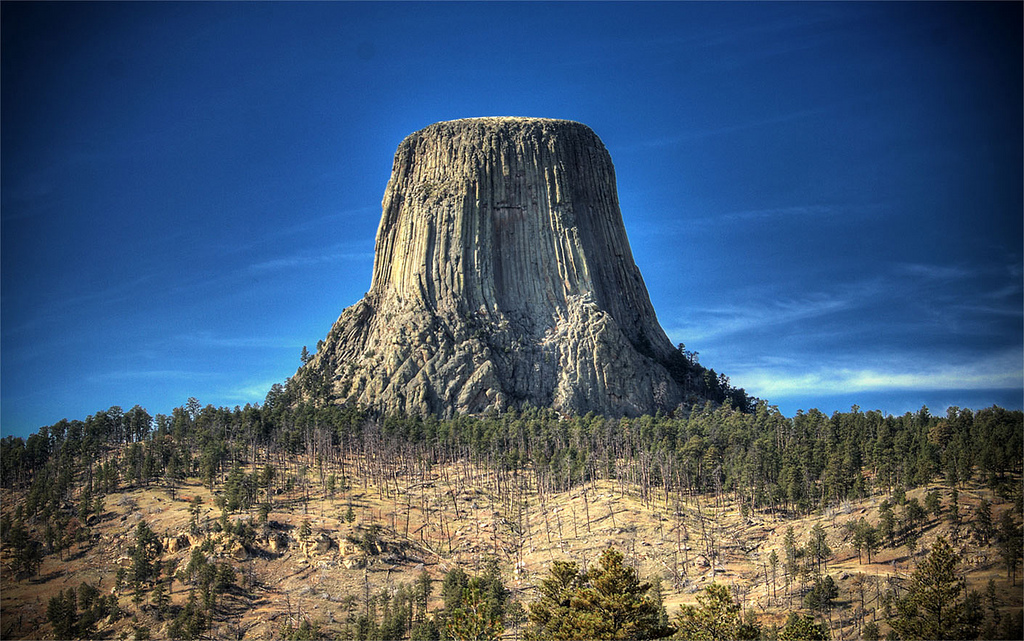 What sort of festivities can we expect from the joint Beer Festival?

There are 23 different microbreweries represented, bringing about 2 or 3 brews that they’re most proud of. There will be a BBQ cook-off contest and other family events.

Patagonia has donated two 45L climbing packs. One of them will be the prize for the best film clip, and the other will be given to the individual who can document that their home is the farthest away from Devil’s Tower.

You can also expect stupid human tricks, of course. There will be a climber’s fitness triathlon that I’m working on. It will include walking a slack chain, a two-minute time limit for pull-ups and toes-to-bar, and the perennial crate stack. All three of these will be put together and the top man and woman will get an 80m rope from Petzl.

What’s really going to be fun about this is that we’ll be doing this around a bunch of drunk beer festival-goers … The Beer Festival is from 12-5 on Saturday, the 12th. At 7pm a live local outlaw country band will perform in town, and as there’s no open container law, it’s perfectly cool to get beer from bars and carry it over to the concert.

What top 5 routes do you recommend on Devil’s Tower?

I’m not going to recommend the 50 Classic’s Durance Route (5.6/7), as it’s always crowded and not necessarily the best at the Tower! I’ve never done this before. I’ve taken kids on week-long field trips in other countries, but have not organized a climbing festival!

Registration for the festival opens on Tuesday, September 8 at Dillon’s Hardware/Off the Grid Sports in downtown Sundance, WY. The Registration fee for the Sundance-Devils Tower Climbing Festival is $50, which includes entry into the 2nd Annual Sundance Beer Festival.

For more details visit the festival’s website. Feel free to contact Dave Schrall via email at [email protected] or by phone 307-290-0364 with any questions you may have!