The Birth of Tunisian Climbing The tiny North African nation of Tunisia had no climbing to speak of until 2012, when Slim Bougerra and his university club bolted lines at Zaghouan mountain. Featured image: Arnaud Petit Setting Kif Kif Bang Bang 8C. Photo by Phil Bence.

When Slim Bougerra moved to France to study for his PhD in computer science, he fell in love with climbing. It’s not surprising, given that he moved to Grenoble, the access point for one of the largest volumes of climbable rock anywhere in the Alps. Bouldering, sport, multi-pitch, ice, and alpine were all at his fingertips.

In his home country of Tunisia, however, a small nation of 12 million wedged between Algeria and Libya on Africa’s Mediterranean coast, climbing was nonexistent. “I realized that if I ever wanted to go home and climb, I’d need to start a climbing scene,” Bougerra said. While nearby Morocco has been well-known for years due to growing meccas like Tafraoute, Tunisia, tiny in comparison, had nothing. “There were a couple of routes [in the country], maybe three, but they weren’t bolted,” he added. “Just sort of freestyle stuff, 4th or low-5th class routes.” These routes dated back to the 1960s, and were on the limestone of Zaghouan mountain, a rocky peak (1,295 meters / 4,249 feet) an hour south of the country’s capital, Tunis. Bougerra knew if he wanted to grow the sport, he needed help. There was a small scene of spelunkers in Tunisia, who knew how to manage rope systems and were keen to explore outside. Mourad Attia, a member of the spelunking club, said, “We were interested in climbing as well, we had heard about it, but we didn’t have the gear or means to start.” Bougerra contacted the spelunkers, told them about his experiences climbing in France, and got them stoked on the sport. “I said, ‘Let’s extend the horizon beyond what’s below the rock, and go above ground and bolt these climbing routes,’” he told me. There were also several students at a French School of Tunis keen to develop climbing in the region. Bougerra combined forces with them, bringing a crew of fourteen down from the climbing club at his university in Grenoble (GUCEM) in May 2012. They chose Zaghouan mountain as their target, due to its close proximity and sheer volume of climbable rock (a visiting French guide estimated that there were more than 500 routes waiting to be established there).

Djebel Zaghouan’s history dates back to the Roman era, when aqueducts were used to transport water from the mountain to Carthage, nearly a hundred miles away. A 2nd-century temple, built under Hadrian, still stands on the site of the mountain spring where the aqueduct originated. The old limestone rock at Zaghouan is reminiscent of Spain or Greece, says Bougerra, with a variety of tufas and “so much friction that you can put a toe on anything and stand easily.” His team equipped over 50 lines on the north face of Zaghouan, with grades up to 8b (5.13d), as well as a few multi-pitch routes (the walls at Zaghouan reach up to 150 meters [492 feet]). “The rock is really, really old,” said Bougerra. “You have to clean a lot, take out pieces the size of refrigerators. It’s very fragile, you really have to know what you are doing.” A crowdfunding campaign in 2015 which raised over 5,000 euros resulted in another bolting initiative with a Petzl-sponsored French team. There are now over 200 routes on Zaghouan, and approximately 50 local Tunisian climbers, with routes at other crags, like nearby Djebel Ressas.

Resources below on Coming to Climb in Tunisia

Coronavirus restrictions have eased in Tunisia, with the country currently only reporting a handful of new cases at most each day, and frequently none at all. Total reported COVID-19 cases as of June 19 sit at 1,132, with 1,006 recovered and 50 deceased. Tunisia is preparing to be the first country in North Africa to reopen its borders to foreign tourists.

Late August through to March are the best times to come climb in Zaghouan, as the summer months are incredibly hot, with daytime temperatures in the desert frequently sitting at 100℉.

Zaghouan is 37 miles from Tunis, an hour’s drive due south from the Tunis airport, reached by local bus (approximately $1.50 one-way on the S.R.T.G. Bus to Nabeul) or a rental car. Climbers already in the city center can also take the Tunisian Railways train from Tunis Ville station downtown eight stops to Depienne ($1), then go by taxi to Zaghouan in fifteen minutes. There are hot springs on the mountain, and climbers staying in Zaghouan are also less than an hour from the beautiful resort beach town Hammamet on the Mediterranean. Visiting climbers can find accommodation at hostels and hotels in Zaghouan. Rooms at Dar Aida Zaghouan run from $43 USD per night, and the swank Dar Zaghouan, with spas and two pools, has rooms starting from $50 USD.

Permits are needed to climb, but the local climbing club, Attitude Escalade, can procure permits quickly for visiting foreign climbers free of charge, as well as facilitate lodging and transport. Contact them at [email protected] or via their website. Rental gear is also available from the club. Mourad Attia, formerly the club president, lives in Zaghouan and is also available to show visiting climbers around and help find lodging. Contact him at [email protected]. For in-depth information about the climbing in Tunisia and some topos, check out the PDF here. More route info is available on “the Crag,” which also has route info for Djebel Ressas, but a visiting climber’s best bet is to contact Mourad or the club for more information and recommendations.

Since 2013, the Zaghouan climbers have also held an annual “Zaghouan Mountain Film Festival” each fall. It highlights a dozen or so international outdoor films over the course of three days. Attia is unsure if the film festival will occur this year due to the coronavirus however, interested parties should reach out on Facebook.

With only a handful of climbers in the entire country, climbers looking to avoid crowds in nearby Spain and France will find Tunisia offers a solid alternative. For those looking to put up new lines, Zaghouan (and Tunisia as a whole), holds hundreds of routes waiting to be sent. Moja Gear’s destination guides are only made possible through the feedback from climbers like yourself. Are we missing some beta? Have anything extra to share? Send us a message [email protected]. 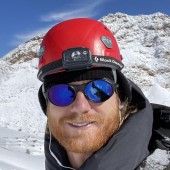