El Salto is a sport climber’s paradise in the northeastern Mexico state of Nuevo León. Steep limestone walls extend out of the massive canyons in the Sierra Madre Oriental mountain range, offering everything from techy face climbing to steep tufa-pinching to roof climbing through the caves.

There are hundreds of climbs in El Salto, mostly concentrated at four main crags: Las Animas Wall, The Tecolote Cave, La Boca, and Cumbia Cave. Additional smaller areas are spread throughout the canyons as well, and the potential for further development is huge. Approaches to the various cliffs are beautiful hikes that would be well worth it in their own right, and they range in length from 10 minutes to 40 minutes.

Despite a staggering concentration of hard climbing, the atmosphere in El Salto is laid back. Maybe it’s the daily afternoon siestas? The empanadas filled with dulce de leche? The chickens puttering about? The sunrises on massive, limestone canyon walls? The delicious street food fried up in front of you? The local veggie truck? The puppies??? El Salto is a sport climbing destination. Most of the routes are long single pitches, some extending upwards of 50 meters in length. Long routes are equipped with midway anchors; a 70-meter rope should do for the majority of climbs.

While less popular, there are also several multi-pitch sport routes with more in development. According to Mountain Project, winter is the best season for climbing in El Salto, with prime months from December to February. Several of the crags are in canyons, however, and bolters in the area will attest that spring, fall and even summer can be great as well.

We visited El Salto from mid-January until the end of February. The days were very hot, but we were told that the season was unusually warm. To manage the heat, we would climb in the morning for four or so hours while the walls were in the shade. Once the sun hit, siesta time began! Following 3-4 hours of delicious snacks, napping, and reading, we’d squeeze another one or two pitches in after the evening shade returned. Kirsten Hundza on Body Groovin (5.12b)

Climbers comfortable climbing 5.12 and up will have the most opportunities on a trip to El Salto. There are a few classic 5.11s but most of the stellar routes are in the 5.12-5.13 range, with several lines at 5.14 for those seeking a greater challenge.

While El Salto is growing in popularity, it is yet to receive a ton of traffic, especially on the harder routes. Many of the grades initially assigned to routes were as soft as a kitten, but most have been downgraded significantly.

Climbers traveling from overseas have told us that the grading now seems comparable to that of European limestone. “Holiday grades?” you may ask? You’ll have to come test them for yourselves. Jared Nelson on Murder Weapon (5.14a)

Seriously, almost everything we climbed in El Salto was awesome. Here are some of the best … Every Saturday two pickup trucks drive through Cienega de Gonzalez in the late afternoon selling local veggies to businesses, locals, and climbers. The fresh vegetables make it so you almost never need to leave the mountain, so make sure you don’t miss the trucks! Dona Kika’s store is definitely the hangout spot in town. Her small store sells most of the groceries you will need, along with beer, treats, and wifi, and she restocks once a week. On the weekends they serve up the best elotes in town right out front. Kika’s is the place to find other climbers too—either lounging in chairs out front, hanging out in the store, or camping in Kika’s yard.

On weekend nights, Chuy’s Restaurante down the street is the place to eat. For 50 pesos (around $2.50) the hamburguesa doble will blow your mind and change your standards of hamburger-eating forever. Along with a variety of other tasty eats on the menu, they will whip up a vegetarian option on the fly with whatever they have in-house. The climbing in El Salto is accessed from the small mountain town of Cienega de Gonzalez, about a 45-minute drive into the mountains above the city of Santiago.

The easiest and cheapest camping is in the big grassy yard at Dona Kika’s. You can park your van (like we did—for five weeks without moving it once) or pitch your tent in the yard. Kika’s has bathrooms, a shower, drinking water, and a fully equipped kitchen area that you are free to use if staying in the yard. Kika’s is also very central, and you can walk everywhere in town and to all the crags (except Cumbia Cave) from this home base.

Another great option is to rent a house or cabana. Kika rents a few rooms, but there are other options in town as well. Ask at Kika’s when you arrive in town for the best options. One word of caution here: we heard a couple stories of visitors being overcharged significantly if they booked a place online in advance of coming. There is no guide book for El Salto, but some topos are floating around online. Many of the routes have plaques at the base with names and grades. Check out route information and updates here and here.

Cienega de Gonzalez is a small town and almost no one speaks English. Be prepared to speak a little bit of Spanish to get by.

It is pretty quiet during the week in Cienega de Gonzalez, but on the weekends the town lights up. Cienega de Gonzalez is a popular weekending spot for locals from Santiago and Monterrey, and many people come up the mountain on Saturdays and Sundays to rent cuatrimotos and ride through the canyons. The weekend crowd also loves to party—usually by blasting music from parked cars with all the doors open, or through sound systems with flashing colored lights strapped to the front of quads. Feel free to join the partying! If you’re planning to climb early on Sunday or Monday mornings though, earplugs may be a good idea for the nights before.

Consider adopting a puppy. Very few of the dogs in Mexico are spayed or neutered, and you can save a puppy’s life really easily by opting to take one home. There were three litters of pups over the five weeks we spent in El Salto. Editor’s note: this article was originally published on May 18, 2017. 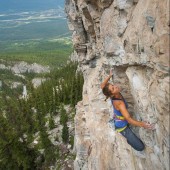