I’ve been climbing in West Virginia for seven years, and up until last weekend, I could never talk about an experience at Seneca Rocks—one of the most popular multi-pitch areas on the east coast.

I was finally taken by my climbing partner, Lex, who I followed up Green Wall (5.7) the morning after a good summer rain. Lex assured me several times I could climb the thing, though each time I let myself look up at the towering fin of quartzite, I begged him to take me home, and threatened to crap my pants just to get out of climbing. Lex, knowing me too well, only shook his head and said, “You aren’t doing yourself any favors. Stop crying.”

So I carried on, even though recent trips to Old Rag Mountain in Virginia had taught me that a traditional 5.7 and a sport crag 5.7 are two completely different things. Nevertheless, with much regret of the chocolate and wine from the night before, I trekked up the old stone steps and scrambled to the base of Green Wall.

We gained the summit just in time for a rain storm to wash over us, with one 60m rope, a line at the rappel station, and a short (now wet) down climb. The more we sat, the more I let anxiety wash in again, but this time there was no begging to go back. Instead, there was a 300-foot drop on either side of a thin ledge and only one way back to the car.

The wind whipping the trees around, we knocked out the down-climb quickly and made it to the bolts of the second rappel. Here is where I wrongly insisted the glue-ins were too dangerous to weight. Here, too, to my embarrassment, is where I cried for the fourth time: my personal anchor on a healthy, young bolt that I refused to trust, my arms wrapped around a shallow-rooted pine, and my feet screaming in my sporty pink Five Ten Hiangles.

It took me a long time to come to the conclusion, and then longer to give up trying to hide, that I am what I will here refer to as a postscript climber. In other words, someone who is only able to climb because climbs have already been developed; owing it to the larger climbers before and above who have led the way.

I am, and always will be, a follower.

When I flip through the glossy pages in the photography collection of Yosemite in the Fifties, I think to myself (and my partner confirms): “That would not have been me.” Flipping the page to a photo of Warren Harding with thrill and pure god-forsaken unwellness in his eyes … “That is not me. I would not have been a climber, not back then.”

Harding would have laughed canned beans in my face and left me on a ledge to rot.

It’s a huge bummer. I’ve identified as a climber for seven years now, and an instructor for four. When I faced the fact that I am what the video Top Rope Tough Guys is laughing at, I certainly felt like Holden Caulfield’s phoniest of all phonies. It disturbed me to think I was not what I once thought I was, nor did I feel competent enough to teach.

But there’s comfort in being straight with yourself: when you’re a weenie, it’s best to accept it, and subsequently, own it. So, here it is: anything involving taking a risk in climbing is impossible for me to accomplish without crying and/or nausea.

Any climber can tell you about the one time that in the throes of desperation, where climbing ends and pure survival kicks in, they swore, for better or worse, that they would never ever climb again. For some of us, this vow has been uttered on multiple occasions, mid-pitch, into little cracks where only lackadaisical insects live. I say it once a week, at least; yet we continue.

I’m the lead instructor and climbing school director of a small climbing gym in Martinsburg, West Virginia. Back in February, the gym was put up for sale, and in the likely event that there were no interested buyers, it would be shut down and sold for parts.

It wasn’t looking good for the few of us who cared in a town where most people think less of our gym as a training and instruction facility and more of a lame version of a Monkey Joe’s. Though we’re in close proximity to some classic climbing destinations, the community is simply uninterested in the sport.

Even on my best days, I can pitch the gym’s intro classes to a hopeful-looking climber-to-be, but then the inevitable question comes up: “So… where exactly are you located?” and I respond, as chipper as possible, with the most recognizable landmark close by: “Do you know where Lust is? We’re right behind the strip club, Lust. With the big purple sign. Yeah, and the limos out front,” and I throw in one last “Bring your kids! It’ll be fun,” for good measure.

With the threat of shutting down, and the unlikelihood of an interested buyer in a non-climber town, myself and what little members we had were ready to run the gym as a co-op before we’d let the place go down, and we all had our reasons. Climbing is like that.

Climbers stay motivated against unfavorable conditions: weather, financial, physical, or otherwise, to adapt and persevere. So what makes me fight so hard for a climbing gym when I’ve lost all hope of excelling at the sport? I’m not developing climbs worldwide, nor am I even mastering 5.10 sport.

Perhaps the answer lies within this classic, overused words of George Mallory:

Because it’s there… Everest is the highest mountain in the world, and no man has reached its summit. Its existence is a challenge. The answer is instinctive, a part, I suppose, of man’s desire to conquer the universe.

Of course, now Everest’s summit has been reached, but people continue to climb it, postscript-ously.

Miraculously, the gym was bought by a climber and remains open. But the impact of almost losing it still remains, and we’ve been trying harder than ever to grow the climbing community. The shared goal of our staff is getting people in a little town to try something new and push past their comfort zone.

In order to do that, we have to push our own.

Our 40+ most popular articles ever
Today’s Best Rock Climbing Gear Deals
200+ rock climbing videos
Essay: Will You Be My Trad Guru?: The Importance of Apprenticeship in the Gym Climbing Era
The Joys of Moderate Multi-Pitch … and How You an Enjoy It, Too!
Climber Confessional: On Listening to Your Gut and Your Child
Strategies for Safer Rappelling
“I Will Climb, Too” — A Story on Mentorship and Responsible Climbing
Climber Confessional: A Learning Experience in How Not to Use a GriGri
Nursery Rhymes, Biomechanics, and Bad Attitudes — Why I Stopped Climbing
How to Build Your First Trad Rack
Gear You Ought to Know: A Review of Sterling Rope’s Hollow Block
Get daily updates by Liking us on Facebook
Free rock climbing PDFs on technique, training, knots, and more 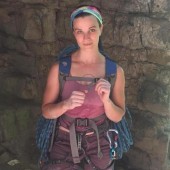 I'm a climbing instructor and writer in Martinsburg, WV. My poetry has appeared in Foliate Oak Literary Magazine, Occulum, and Fluent Magazine, and fiction in the Anthology of Appalachian Writers.